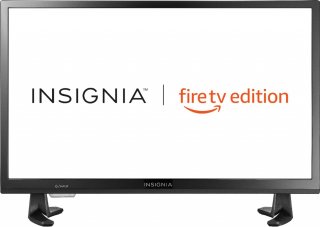 Even in the deepest recesses of bargain bins, there is usually something that can really catch your eye.

This particular deal involving the 24-inch Insignia Fire TV at Best Buy fits that bill perfectly. It’s not just the TV, however, as you will also be getting a free Amazon Echo Dot (a third-generation one too).

The total price? A measly $100—that’s one dinner outing with your special someone. Keep in mind that the Echo Dot itself is worth $50, so essentially, you’re only paying $50 for this TV purchase.

If you are familiar with Best Buy’s offerings, you probably know that its Insignia brand is a great option for budget-conscious consumers out there. Insignia is sort of like the Frankenstein of the TV world, as the brand often uses parts from past-year versions of LG, Toshiba and Samsung TVs—so sometimes you don’t exactly know what you’re getting.

But know that this 24-inch Insignia is a great value play—it could work out perfectly in smaller bedrooms, dens or kitchens. Also, be aware that this is a 720p resolution TV (not ideal for computer use), so you have to be a bit realistic about what you’re getting.

Obviously, when compared to the more expensive OLED or QLED panels, the picture quality falls short in nearly every aspect. However, for most folks out there, it is more than passable for everyday TV watching and family movie nights.

It seems like Roku TVs are getting more love these days, but the Fire TV option really holds its own. It is fully capable of giving you access to all of your favorite apps like Netflix, Hulu and Disney+, as well as obviously Amazon Prime Video. Similar to Roku TV, Amazon’s streaming content choices are seemingly endless (likely more than you can handle). Not to be outdone, the Alexa-enabled remote comes in handy when you just want to tell the TV which channel you want to watch.

As for the Echo Dot, you can use this highly regarded device to launch apps, search for titles and switch inputs on your TV with just your voice. Moreover, it allows you to control your smart home, make calls to almost anywhere in the country and stream songs from some of today’s most popular music services.

Compared to previous generations, this iteration really packs a punch via its vastly improved audio. On most levels, it’s a better smart speaker than the Google Home Mini and does match up pretty well with its larger and more expensive sibling, the Echo.