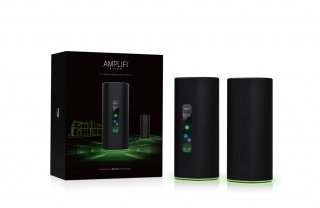 Wi-Fi 6, also known as 802.11ax, was unveiled last year rather quietly compared to the hoopla surrounding 5G. This particular next-gen Wi-Fi is the appointed successor to Wi-Fi 5 (802.11ac), and it provides more speed and lower latency to all Wi-Fi 6-enabled devices, not to mention better energy management for battery-powered devices like laptops and smartphones.

If you’re using a Wi-Fi router with only a single device, the maximum potential speeds should reach 40 percent higher with Wi-Fi 6 compared to the prior generation. Wi-Fi 6 is able to accomplish this via more efficient data encoding, which results in higher throughput. Basically, the chips that encode and decode these data signals only continue to get more powerful and efficient and can handle the extra work.

However, just because a router embraces this new standard doesn’t guarantee greatness for the amount of money you’re paying up. The one Wi-Fi 6 router that fails miserably in this value metric is the Ubiquiti AmpliFi Alien. Featuring a tubular design with LED lights and touchscreen controls, this high-end router definitely looks futuristic—but it is far from being future-proof.

That fact can really irk consumers when you take a gander at the price—$379 as a standalone router, or $700 to get it bundled as a mesh system with a range-extending satellite device. Despite these high price points, tests have shown that two other similarly priced Wi-Fi 6 routers—the Netgear Orbi 6 and the Linksys Velop MX10—boasted slightly higher speeds.

Also, you would think that shelling out $700 would get you some ancillary perks—the AmpliFi Alien falls short on that as well. For starters, be aware that it doesn’t include a multigig Ethernet jack that can accept incoming wired speeds faster than 1Gbps. Moreover, one of its two 5GHz bands only supports Wi-Fi 5, which tarnishes some of the tri-band appeal.

However, for the average user out there, the AmpliFi Alien should do the job. And as a Wi-Fi 6 device, it is armed with the ability to send information to multiple devices at once with a single transmission, which will surely be a must-have for all routers in the near future. According to one recent report, the average household will have about 50 connected devices by 2022, up from around 25 today.

Overall, the AmpliFi Alien does what it is expected to do, but it really stumbles on the value front. No one needs to spend $700 in order to upgrade to a mesh router that supports Wi-Fi 6. If you’re still aching for one, just wait a year or two and there will surely be cheaper prices to take advantage of.