Apple Reaches $2 Trillion Value (Worth More Than Many Countries) 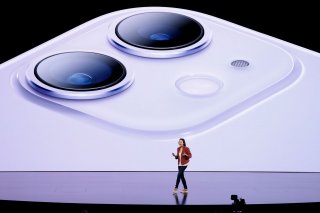 Apple hit a major milestone on Wednesday, becoming the first American public company whose valuation has reached $2 trillion. The milestone comes just under two years after Apple hit a value of $1 trillion, in August of 2018, for the first time.

Per CNBC, Apple hit the $2 trillion mark at around 10 a.m. on Wednesday, based on 4.275 billion shares trading at $467.77 a share. The company’s valuation actually dipped back below $2 trillion by the end of the day, and remained there as of Thursday morning, but that also happened last year when the company’s value hit $1 trillion.

Other tech giants, including Amazon, Alphabet and Microsoft, also boast market caps of over $1 trillion.

While Apple’s stock dipped in March to as low as $224 a share, when the coronavirus-related lockdowns began, it’s been steadily rising in the months since, now trading at double that low. Earlier this summer, it passed Saudi Aramco to become the most valuable public company in the world.

Even amid the pandemic, which at least temporarily closed most Apple Store locations, Apple’s business has been robust, as they’ve continued to sell huge numbers of iPhones, while the company’s Services category has been massively successful as well. Apple announced a huge second quarter at the end of July, during which the company posted revenue of $59.7 billion, which was ahead of analyst expectations and represented an 11% gain over the same period the year before.

The company, while it no longer releases individual numbers for how much it sells of each product category in each quarter, said that it brought in $26.42 billion in iPhone revenue and $13.16 billion in services revenue in the second quarter.

The company also announced plans for a four-for-one stock split during its earnings call.

“In uncertain times, this performance is a testament to the important role our products play in our customers’ lives and to Apple’s relentless innovation,” CEO Tim Cook said at the end of July. “This is a challenging moment for our communities, and, from Apple’s new $100 million Racial Equity and Justice Initiative to a new commitment to be carbon neutral by 2030, we’re living the principle that what we make and do should create opportunity and leave the world better than we found it.”

Apple is expected to release four new iPhones, likely all with 5G capabilities, later this fall, although the company admitted that the phones will probably arrive a few weeks later than usual.

While Apple has denied any interest in getting in on the bidding for TikTok, the company recently got into a public fight with Epic Games, the maker of the popular video game Fortnite.