Apple's New 2020 iPhones Will All Include OLED Screens: Report 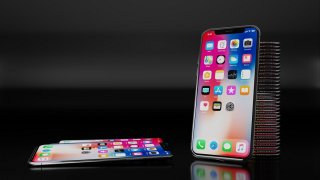 Apple will be using OLED panels for all four of its 2020 iPhone models, according to a report Tuesday in Nikkei Asian Review, which cited an "executive-level source."

According to the report, Apple will release four phones with three screen sizes- 5.4-inch, 6.1-inch and 6.7-inch. Apple began using OLED screens with the iPhone X, and last year's iPhones used them with the exception of the iPhone 11, which used an LCD panel.

This year's iPhones will continue to use a notch, the report also said. And it added that BOE Technology, the Chinese firm that was set to make panels for the iPhone for the first time, "has not yet met the U.S. company's standards," but may reenter the supply chain later.

Nikkei's report also reiterated recent reports from multiple analysts that Apple will not be including a charger or EarPods in the box with this year's iPhones. A source told the outlet that the reason for that shift is "a lot of existing iPhone users already have many of them over the past few years."

Nikkei Asian Review had reported at the end of June that Apple is "pushing its suppliers to try to reduce production delays" in this year's iPhone lineup. The report also said that Apple is "facing delays of between four weeks and two months for mass production of the four models in its 5G lineup." Analysts have been reporting that Apple is aiming to have iPhones ready for the traditional release window in September, but that a slight delay to October remains very possible. Broadcom, a major supplier of iPhone parts, implied as much in early June.

Apple, the earlier Nikkei report said, has returned its development team in California to the office, in a step not taken by most Silicon Valley firms, while also setting "an aggressive schedule" for developers.

LG’s CEO said this week that the company plans to debut its first-ever rollable OLED-screen smartphone in 2021. That technology has been included in LG televisions, and even in smartphone prototypes, but hasn’t yet reached the market on a smartphone.