Are Samsung QLED HDTVs Susceptible to Burn-In Like OLED TVs? 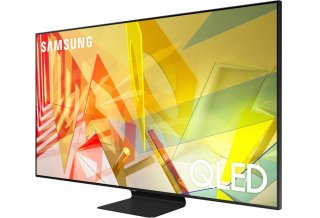 When it comes to pure picture quality, it is indeed quite difficult to topple the brilliance of what LG OLED TVs can offer.

But if you’re in the market to save a few hundred bucks and still get your hands on an amazing panel, look no further than Samsung’s QLED TVs.

And as an added bonus, you won’t have to deal with those nasty burn-in issues—as Samsung says: “QLED TVs are guaranteed against TV burn-in for 10 years so you can rest assured that you’ll always have an incredible viewing experience.” The company also boasts on its website that its QLED TVs are certified to be burn-in-free by a reputable German tech magazine.

Sure, it is pretty rare for OLED TVs to get burn-in, but the fact of the matter is that it does happen occasionally. Ultimately, the dilemma is that all organic light-emitting diode screens, no matter the brand, can suffer from burn-in—whenever a persistent part of the image of a screen, such as a channel logo or a scoreboard from a sports game, remains as a ghostly background no matter what else is being shown on the screen. These static image elements have “worn out” certain areas of an OLED screen’s organic materials faster than the rest of the screen.

And from what studies have shown, OLED screens are more susceptible to this particular issue than standard liquid crystal displays, including Samsung’s QLED models. If you’re one of those unlucky few OLED TV owners, that’s a sizeable chunk of change going down the drain.

As for the QLED offerings, you will be getting a fine picture—just not on the next-tier level of OLEDs. Keep in mind that despite the fancy name, QLED TVs are basically LCD TVs with quantum dots, which are microscopic particles that when hit by light, emit a certain different colored light. The source of this light is the LED backlight (which OLEDs lack), and that light must pass through more layers, such as the LCD layer, to produce the images on the screen.

Through years-long efforts in improving QLED TVs, Samsung has created a new refined aluminum compound that can make the quantum dots more efficient, and the natural ability to produce more accurate colors. This technology, to a great effect, replaces the red, green and blue color filters that many older TVs used.

Samsung, though, is far from done innovating. The next giant leap in TV-display tech will likely come from the Korean company, which is currently trying to take the best qualities of LCD/QLED and OLED technologies to create a new groundbreaking hybrid TV. It is still debatable whether these QD-OLED hybrids will totally eliminate burn-in, but Samsung has already committed $11 billion over the next five years to find out.