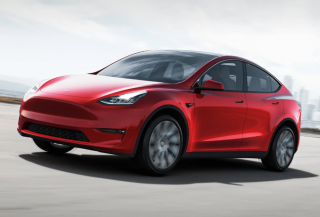 Elon Musk may be the only major CEO who makes news in Twitter replies.

On Monday, the Tesla chief said on Twitter that a 7-seat Model Y Tesla is likely to arrive on the market in the fourth quarter of this year. And the statement came as part of a Twitter conversation about a Bluetooth speaker.

On June 9 Marquees Brownlee, a web video producer who is also a professional Ultimate Frisbee player, tweeted a video review of a $3,500 Bluetooth speaker. Eleven days later, Musk replied, telling Brownlee that he had “bought based on your review. It’s great!”

The Twitter thread then shifted into an impromptu “Ask Me Anything” session in which Musk was asked about his favorite video games and other subjects. Then, a user asked the CEO, “Hi Elon, when do you think the 7 seater Model Y will start to delivery? My biz partner ordered one for his wife & keep asking me?”

Tesla, per CNET, has currently been in production on only a 5-seat Model Y. The fourth quarter begins October 1, which means the seven-seater will be ready for delivery by the holidays.

The Model Y, a compact SUV, was first unveiled by Tesla in early 2019, and production began at the company’s Fremont plant in California earlier this year. The first deliveries took place in March.

While the new factory that Tesla is expected to build near Austin will focus on the new Cybertruck, Tesla will also build Model Y cars there, according to media reports earlier this week.

While Elon Musk sometimes uses Twitter to make news, that platform has gotten the CEO in trouble in the past.

In September of 2018, Musk tweeted—apparently falsely—that he had secured financing in order to take the company private. This led to charges from the Securities and Exchange Commission, and a quick settlement which had Musk paying a $20 million fine, giving up the company’s chairmanship, and reportedly agreeing to a list of topics for which he would obtain pre-clearance in order to discuss on Twitter.

Tesla, at a market cap of just over $187 billion, is now the world’s most valuable car company. As of Tuesday morning, its stock was trading at an all-time high of over $1,000 a share.