Elon Musk Wants to Make Sure Space X Gets to Mars 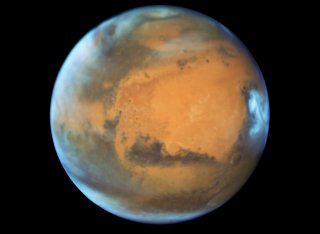 It was only a little over a week ago when SpaceX successfully launched two astronauts to the International Space Station, but the company’s CEO Elon Musk is already planning for the future.

And this time, his eyes are squarely set on Mars.

Musk has urged his SpaceX employees to accelerate the work on the next-generation Starship rocket, which will one day transport humans to the Red Planet and eventually build a colony there.

“Please consider the top SpaceX priority (apart from anything that could reduce Dragon return risk) to be Starship,” Musk wrote in an internal email.

Last year, Musk unveiled the Starship prototype, which is built of stainless steel and much bigger than the company’s existing spacecraft. SpaceX has a goal of launching as many as 100 people at a time on missions to both the moon and Mars.

The Starship is one of three major projects SpaceX is currently involved in—the others being the Crew Dragon space program and the launch of the Starlink constellation, which aims to place 12,000 satellites into orbit to beam high-speed internet back down to Earth.

The Starship development program, however, in Boca Chica, Texas, has suffered from a string of setbacks. The most recent prototype exploded shortly after an engine test on May 29.

Musk asked SpaceX employees to “consider spending significant time” in Boca Chica to further accelerate the Starship’s development, according to the email. SpaceX currently has about 8,000 employees, most of whom are at the company’s Los Angeles-area headquarters or its facilities in Cape Canaveral, Florida, and near Austin, Texas.

“For those considering moving, we will always offer a dedicated SpaceX aircraft to shuttle people,” Musk wrote.

SpaceX’s May 30 launch of a pair of NASA astronauts ushered in a new age of human spaceflight in the United States. In nearly a decade, the flight marked the first time astronauts have launched into orbit from American soil, with SpaceX becoming the first company to send passengers into space on a privately made vehicle.

Musk noted that this mission is ongoing, and the spacecraft is set to return the astronauts back to Earth in the next couple of months.

Ethen Kim Lieser is a Minneapolis-based Science and Tech Editor for The National Interest.