Forget Coronavirus: We Could Have Biggest Holiday Season Ever Seen for Retail 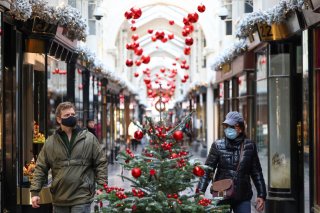 While 2020 has been one of the strangest years in history for all sorts of reasons, and that’s also the case for the economy. The economy, in the United States, was growing in the early part of the year, took a huge nose dive due to coronavirus, and has since begun to rebound.

“This holiday season will be unlike any other,” Matthew Shay, the president and CEO of the National Retail Federation, said this week as part of the releases of the retail industry association’s annual holiday season forecast. But that season, NRF believes, will be the biggest in history.

The forecast says that retail sales for the holiday season, which is defined as the months of November and December, will increase by between 3.6 percent and 5.2 percent over last year’s number, landing a number between $755.3 billion and $766.7 billion.

That would be the biggest holiday season on NRF’s chart, which goes back to 2002, although annual holiday sales going back that far were only $416.4 million. Retail sales, per NRF, have increased year over year every year of the last eighteen years, with the exception of the financial crisis year of 2008, when they dropped 4.7 percent.

“Retailers have planned ahead by investing billions of dollars to ensure the health and safety of their employees and customers,”  Shay said in the release.

“Consumers have shown they are excited about the holidays and are willing to spend on gifts that lift the spirits of family and friends after such a challenging year. We expect a strong finish to the holiday season and will continue to work with municipal and state officials to keep retailers open and the economy moving forward at this critical time.”

NRF also predicted that online sales were increased by between 20 and 30 percent, to between $202.5 billion and $218.4 billion. And NRF believes that with the lack of travel and other traditional expenses this year, consumers will have more money to spend around the holidays.

“Given the pandemic, there is uncertainty about consumers’ willingness to spend, but with the economy improving most have the ability to spend,” NRF Chief Economist Jack Kleinhenz said in the release. “Consumers have experienced a difficult year but will likely spend more than anyone would have expected just a few months ago.

“After all they’ve been through, we think there’s going to be a psychological factor that they owe it to themselves and their families to have a better-than-normal holiday. There are risks to the economy if the virus continues to spread, but as long as consumers remain confident and upbeat, they will spend for the holiday season.”