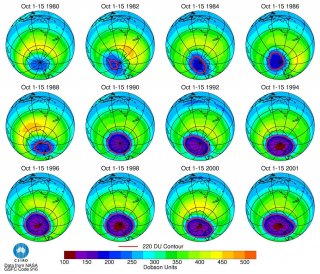 Researchers at the University of Southampton have shown that a mass extinction event 360 million years ago was caused by a brief breakdown of the ozone layer that protects Earth from ultraviolet radiation.

The findings, which were published in Science Advances, help give scientists a glimpse into what really killed off many of the planet’s plants, species of fish and tetrapods, our four-limbed ancestors.

The team discovered evidence that high levels of ultraviolet radiation devastated the ancient forest ecosystem, which was largely driven by changes in the Earth’s temperatures and climate cycles, leading to the erosion of the ozone layer.

The study’s lead researcher John Marshall, who is a professor at the University of Southampton’s School of Ocean and Earth Science, said the ozone layer likely vanished for a short period, and that deadly event occurred at a time when the planet was warming.

“Our ozone shield vanished for a short time in this ancient period, coinciding with a brief and quick warming of the Earth,” he said in a release. “Our ozone layer is naturally in a state of flux—constantly being created and lost—and we have shown this happened in the past, too, without a catalyst such as a continental scale volcanic eruption.”

Marshall noted that his team’s findings offer a stark warning to what could eventually happen in the near future, as Earth today could reach comparable temperatures and possibly trigger a similar event.

“Current estimates suggest we will reach similar global temperatures to those of 360 million years ago, with the possibility that a similar collapse of the ozone layer could occur again, exposing surface and shallow sea life to deadly radiation,” he said.

“This would move us from the current state of climate change, to a climate emergency.”

There have been several mass extinction events in the planet’s geological past. Only one was caused by an asteroid hitting the Earth, which occurred some 66 million years ago, when the dinosaurs became extinct. Three other events were caused by huge continental-scale volcanic eruptions that destabilized the Earth’s atmosphere and oceans.