Review: “Coup 53” Brings an Infamous Coup in Iran Out of the Shadows 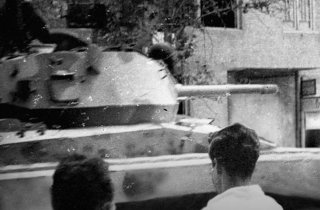 The twentieth century saw dozens of coups and revolutions, but the one in Iran in 1953-in which Prime Minister Mohammad Mosaddegh was overthrown in order to strengthen the rule of Shah Mohammad Reza Pahlavi, was one of the most pivotal. It helped set the stage for a great deal of chaos in that country and the surrounding ones over the course of the subsequent half-century and beyond, including another revolution in the same country, in 1979, which saw the Shah himself overthrown.

That 1953 coup has been the subject of numerous books, including Ervand Abrahamian’s “The Coup: 1953, the CIA, and the Roots of Modern U.S.-Iranian Relations” and Stephen Kinder’s “All the Shah’s Men: An American Coup and the Roots of Middle East Terror.” The understanding that’s emerged over time, at least from most historians, is that the United States and the United Kingdom backed the coup, known as  Operation Ajax, after Mosaddegh acted to nationalize the country’s oil reserves. The U.S. government admitted as much, in 2013.

Now, a new documentary, called “Coup 53,” looks at the coup and how it happened. It’s a fascinating peering into that era of history, even if it doesn’t dive quite as deep as some of the scholarship that’s been done in the matter.

The film, which opens this week in various “Virtual Cinema” video-on-demand platforms, debuted last fall at the Telluride Film Festival. It was directed by Taghi Amirani - an Iranian-born filmmaker who also happens to be a physicist- and co-written by Walter Murch, a legendary editor and sound designer who has won three Oscars, for his work on Apocalypse Now and The English Patient.

It’s not a shock that the film was co-created by an editor, as it weaves together archival footage with interviews with various witnesses. But in addition to that, the film has an ace up its sleeve: Some unearthed interviews with former MI:6 agent  Norman Darbyshire, in which he admits to his part in the coup. And there’s another ace: Actor Ralph Fiennes, who appears on screen as Darbyshire, in which he reads along from the letters.

When I first heard about this, I assumed that Fiennes would merely be reading the letters out loud, possibly in voiceover, but instead, he actually appears in camera. Combining documentary and fiction like this can be tricky, but in this case, it works, thanks to the power of the material and the skill of the actor.

“Coup 53” is one of two documentaries about U.S.-Iran history arriving this week; the other, Desert One, takes place nearly twenty-five years later, depicting the disastrous failed rescue attempt during the Iranian hostage crisis in 1979; look for our review of that later this week. While the Best Picture Oscar winner eight years ago, “Argo,” told a thrilling but historically dubious tale of heroism, the United States has a fraught history in that particular country, and that’s something likely to continue regardless of who’s in the White House for the next four years.

The new “Coup 53” is a worthwhile look at how it all began, and how overthrowing governments halfway around the world can continue to have consequences decades later.