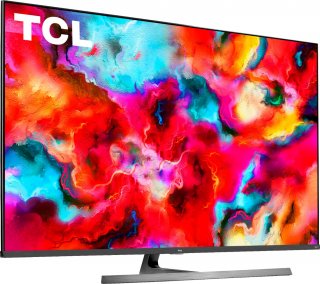 The advice is to jump on this quick before it ends. Just over this weekend, Best Buy, without warning, pulled the plug on these deals for a day, but fortunately for bargain hunters they are now back online.

How big is this mega-sale? It’s basically 50% off for both the 65- and 75-inch models—so you’ll only end up paying $1,000 and $1,500, respectively. If you’re unfamiliar with TCL’s HDTV offerings, know that these are amazing price points that don’t come around often.

Pound for pound, TCL’s 8-Series is one of the strongest non-OLED competitors right now that could put up a valiant battle against all of the unrivaled picture goodness that OLED panels are known to provide.

As the only HDTV on the market that utilizes full-array local dimming backlight with Mini-LED technology, the 8-Series is capable of delivering outstanding brightness and plenty-deep black levels that other LCD-based TVs just can’t match.

Keep in mind that this particular set taps into QLED technology, and not OLED—thus, there will be shortcomings due to it not using self-emissive pixels. QLED panels often have a difficult time competing with OLED displays because OLEDs use organic compounds that include carbon and other materials to create the colors. OLEDs don’t require a backlight, so they are able to produce truer blacks.

For the average TV viewer, though, there probably won’t be a huge noticeable difference—and the price you’re paying will certainly do a good job in masking some of the tiny weaknesses.

Boasting an elegant, stylish design, the 8-Series oozes that high-end feel that you should be getting in a top-of-the-line HDTV. You also can’t complain about the number of port selections, as it comes with four HDMI ports, including one with ARC support, a single USB port, a cable connector for the TV’s built-in tuner and Ethernet for wired network connectivity. There’s also a built-in 802.11ac Wi-Fi for connecting to your router.

Best of all, if you’re one of the millions who can’t live without Roku TV, you’re definitely in luck because it comes built in. Featuring an incredibly intuitive interface, it really is a breeze in quickly finding what you want to pick for family movie night. Toggling between apps and devices is also a snap, as you don’t have to physically deal with all of the buttons and switches of separate devices.

The streaming offerings on Roku are seemingly endless (likely more content than you can handle), and if a new one hits the market, you can bet that Roku will know that and you’ll quickly have access to it. Another nice option is that you’ll be able to connect to Google Assistant or Amazon Alexa for handy voice control.