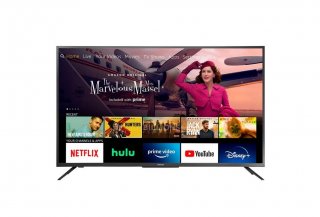 If you’re seeking a no-frills 4K HDTV option that just gets the job done for your bedroom, den, or kitchen, make sure to take a gander at Toshiba’s 50-inch Fire TV.

And right now on Amazon, you can take 13 percent off this solid set and only end up paying $330.

Sure, it doesn’t have the same VIP ring to it as an LG OLED or a Samsung QLED, but this particular budget HDTV is definitely no slouch— and in terms of pure value, it can really hold its own compared to other offerings in the similar price range.

Despite the ultra-friendly price tag, you’ll likely be pleasantly surprised by what you’ll be receiving. No, this panel won’t come close to matching up with the much more expensive OLED and QLED HDTVs, but this 4K set will silently chug along to show you the news, weather reports, late-night talk shows, and the latest movies hiccup-free.

This Fire TV now boasts Dolby Vision HDR that does a valiant job in reducing motion blur and other picture-related annoyances. Know that even when watching action-heavy Marvel films or playing games on a PlayStation, the screen action is smooth and stutter-free and the color gamut is on full display.

What really jumps out at you is the clever tie-up that Toshiba has forged with e-commerce giant Amazon. If you’re already a big fan of Amazon Alexa, there’s no reason why you wouldn’t enjoy owning this set. Now with the highly regarded Amazon Fire TV and Alexa under its panels, it really has become that much more of a go-to option for budget-conscious consumers.

There is a mic built into the handy remote control, and with Alexa handling all communication between you and the TV, it’s like having an Echo or an Echo Dot without actually paying for one (knocking off $40 to $100 from the overall price of the TV). It can also control smart-home devices, get sports scores and weather forecasts, and answer all kinds of general questions.

Fire TV is fully capable of giving you simple access to all of your favorite apps like Netflix, Hulu, and Disney+, as well as obviously Amazon Prime Video. Similar to Roku TV, Amazon’s streaming content choices are seemingly endless.

For a $330 HDTV, be aware that the two 10W speakers are understandably lackluster, though they could be passable for smaller spaces. If you do desire a more immersive, bass-driven audio experience, know that getting yourself a decent soundbar will help out immensely.