7 Rules for How the Pentagon Will Fight the Future 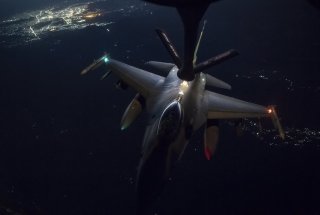 The Defense Department is developing a new Joint Warfighting Concept, an effort that fits somewhere between a meaningless academic exercise and a declaration of World War III.

Musing about war will never anticipate every real-world complication that will arise in preparing for, preventing and fighting real wars. On the other hand, employing military force without a guiding idea is like a blind man playing ice hockey.

For this reason alone, thinking about the next way of war should be taken seriously. This exercise will impact almost everything the armed forces do. In an era of great power competition, the U.S. needs armed forces that are up to the struggle. The right thinking could help get America’s military might right.

In 1973, military historian Michael Howard wrote an important article on thinking about the future. Don’t obsess about getting it right, he warned. This isn’t fortune-telling. There are too many forces and factors, unpredictable and perhaps unknowable influences that may shape future conflict. Success, he wrote, is “being not too badly wrong.”

That was quite practical advice. When the shooting starts, militaries have what they have. The closer preparations match the problems faced, the better the odds of starting off well and preserving in the end. But it’s essential to plan for wiggle room. After all, the enemy gets a vote, and he seldom votes in his opponent’s favor.

Wrestling with the future of war starts the fall of defense dominoes in motion. Concepts lead to doctrine. Doctrine doesn’t tell militaries what to do. Doctrine provides a framework for thinking through the challenges of functioning at the operational and tactical levels. In turn, doctrine shapes who the services recruit, the equipment they buy, how they organize and train forces, and ultimately how they prepare for a fight.

When militaries get concepts wrong, the downstream consequences can be disastrous. Before World War I, France adopted the concept of “attaque à outrance.” The idea was that massed infantry would carry the day in future wars, driving to objectives—literally at the point of bayonets—through sheer élan. That didn’t work out so well. From the first days of World War I, German machine guns and artillery mowed down French troops as they crested their trenches.

In contrast, in the 1980s when the American AirLand doctrine emerged, new concepts transformed NATO’s plans for the defense of Western Europe against Soviet ground forces. Implementing Airland not only secured NATO through the end of the Cold War, U.S. forces employed the warfighting concepts against Saddam Hussein’s Soviet-style forces in the first Gulf War with spectacular results.

The bottom line is that how militaries think can make a big difference. The challenge of getting it “not terribly wrong” is to bring a realistic critical perspective to the task of thinking about the future. U.S. warfighting concepts need to be a fit for great power competition. Here are seven reminders that might help the Pentagon get it right.

#7. Concepts are Conventional Deterrence. Warfighting concepts are not just about fighting wars. They also signal to competitors that not fighting a war with America might be a good idea because they probably wouldn’t win. The great value of AirLand Battle was its strong message to the Soviets that, in a conventional conflict, Red armored divisions couldn’t be at all confident they could roll across the Rhine and onwards to the Atlantic Coast. Creating a credible defensive concept limits the prospects for future conflict.

Credible conventional deterrence is especially important in an age of great-power competition. Right now the strategies of Russia, China, Iran, and North Korea are all premised on “winning without fighting,” achieving their objectives without a direct clash of arms with the United States. Job one is to keep it that way. We need conventional warfighting concepts that never allow any of them to think they could get a jump on the United States on the battlefield.

If warfighting concepts don’t contribute to conventional deterrence, they are no good.

#6. Go Global. The United States is a global power with global interests and responsibilities, therefore our military has to sustain the capability to think and act globally. First of all, no matter what theater U.S. forces operate in, they will likely have to traverse the global commons (sea, airspace, space, and cyberspace) to flow ships, planes, people, supplies and support there. This means the United States will have to call on its allies, not just within a theater, but globally.

Second, the United States can’t afford to get engaged in one conflict that creates an opportunity for another competitor to exploit elsewhere. It has to be able to fight and deter, or fight in multiple theaters at once.

Third, an actual global conflict is unimaginably bad. If the United States can continue to think and act globally that nightmare remains less likely. It is essential, therefore, that any U.S. warfighting concept be global in scope.

#5. Think Regionally. The problem with being a global power is that there is no telling where you may have to fight to protect your interests. Enemies that want to win without fighting spend a lot of their time thinking about how they can create situations where the United States has to fight others, distracting and draining American power. Of course, the United States should avoid unnecessary conflicts, but not all conflicts can be avoided without exposing the nation to even greater, downstream risk.

If the United States has to fight, it must be able to draw on a military capacity and capability sufficient to prevail and impose our will on the enemy—wherever they are (e.g., in mountains, jungles, deserts or at sea) and whoever they may be (e.g., standing forces, mercenaries, insurgents, or terrorists).

Warfighting concepts have to be applicable, scalable and adaptable to a variety of operational settings. We can’t forget how to wage all types of warfare, be it low-intensity or high-intensity, symmetrical or asymmetrical.

#4. Multi-dimensional is a Must. Hate the term “multidimensional” because it sounds like an alien on Star Trek. Still, the reality is every modern conflict from fighting insurgents in the mountains to chasing submarines under the sea requires armed forces that can integrate operations across all the operational dimensions—space, air, sea, under the sea, land, cyber, and the human dimension of conflict.

In future conflicts, the United States might have to fight for “access” let alone “supremacy in any domain and if it loses in one, it might lose in all of them.

Any concept that doesn’t in the end lead to delivering trained and ready forces to operate in every dimension will just come up short.

#3. Think About More Than Just Wars. When the Pentagon makes a big deal about something, the whole building clusters round like vampires at a blood bank. Concepts need to be more than just the next bright, shiny object. While we do need the armed forces to take more seriously its role in big shooting wars, it can’t neglect its role in other military missions from the defense of the homeland to military assistance at home and abroad and working as part of an interagency team on a plethora of problems.

In the 1990s, the military tried out having dual concepts, one for war and one for operations other than war. There is a debate to be had whether that is the right approach or the Pentagon would be better off with an umbrella concept under which nests a family of operational concepts that cover the breadth of mainstream military activities.

The reality is we need a military that’s a bit of a Swiss army knife. We need concepts that reflect that reality.

#2. War is a Group Activity. When we craft warfighting concepts, they are never just about America. Invariably, allies and strategic partners will adapt their organization, practices, training and force structure to better partner with the United States. In an era of great-power competition, allies are more important than ever. There is a free world, and if the nations in that world don’t work together, the free world might not survive the next great struggle.

Military cooperation and combined operations will be a central feature of this time. There will be fewer coalitions of the willing and more coalitions of the caring: like-minded nations that are committed to keeping the free world free.

Developing U.S. warfighting concepts ought to be part of a trust- and confidence-building exercise that brings the forces of the free world closer together.

#1. Concepts are Not Compromise. The United States loses when we use the development of warfighting concepts as a “green eyeshade” exercise to justify how much it wants to spend on defense. That fools no one—least of all America’s competitors. Good warfighting concepts create the rational justification for future requirements.

An adequate military has to do three things: provide trained and ready forces; execute on-going operations and modernize for the future. A force that can’t do that goes hollow, an empty shell that will fail in the end.