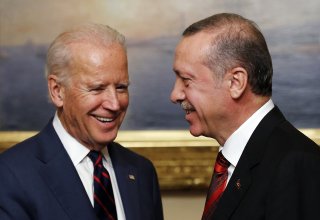 President Joe Biden and Turkey’s President Recip Erdogan will meet on June 14. The bilateral relationship has suffered considerably due to decisions on both sides during recent years,  but the upcoming meeting presents a chance to repair some of the damage. The two leaders should not squander the opportunity.

Each side has strong reasons to rebuild this important alliance, but each leader also faces domestic political opposition pushing them toward extended confrontation: anti-Turkey sentiment among progressive Democrats in Congress, and anti-Americanism widespread in the Turkish electorate. Breaking this deadlock will require diplomacy, leadership and, most importantly, real steps from both Biden and Erdogan, but it is primarily up to Biden to reach out to Erdogan to take the first step and move the relationship forward productively.

The United States and Turkey are bound to each other as NATO allies. They share a long history of collaboration, and their strategic interests are aligned on key points, especially in countering Russia, for which NATO is vital. Yet a strong NATO is impossible without genuine cooperation between Washington and Ankara. Not only is Turkey the second-largest military in the alliance—second only to the U.S.—NATO itself is facing skepticism and doubts from key European members. French President Emanuel Macron notoriously declared NATO “brain dead,” and Germany’s reluctance to contribute proportionately to collective defense is well known. Given the ambiguous perspective of major European countries toward security, Biden should do everything he can to keep Turkey stable within NATO. If Erdogan were to choose to cater to his anti-American Turkish public and leave the alliance—or push the United States out of the Incirlik Air Base—then NATO could disappear.

While Turkey and the U.S. agenda are largely in agreement with regard to countering Moscow, whether in the Black Sea, Syria or Libya, there is nonetheless a long list of other points of conflict. Washington has criticized the Turkish decision to purchase the Russian S-400 system, just as there is dissatisfaction with domestic repressive measures treated as human-rights violations. Similarly, Biden’s recent statement on Ottoman culpability in the Armenian genocide has put stress on the perception of the United States in Turkey.  Meanwhile, Erdogan and large parts of the Turkish public believe the United States is intentionally providing protection to Fethullah Gulen, viewed as the force behind the 2016 coup attempt. More generally, the United States and Turkey are at odds on a range of regional issues, including disputes in the eastern Mediterranean and the conflict between Israel and the Palestinians.

Rather than approaching these problems piecemeal, Biden should initiate a comprehensive diplomatic strategy based on mutually beneficial exchanges and compromises in order to stabilize the alliance. Such a strategy would be consistent with the Biden administration's narrative that “America is back” and its insistence on the centrality of diplomacy. Biden should use his meeting with Erdogan to reach out with a willingness to make concessions on appropriate points and to negotiate on others, in the spirit of repairing the partnership.

The foremost dispute that divides Turkey and the United States is the conflict in northeast Syria and the misguided partnership that the United States entered into with Kurdish forces of the YPG-PKK. Turkey views them credibly as an existential threat.  The United States owes NATO ally Turkey an unambiguous response to its concerns regarding Kurdish terrorism. A bold move by Biden on this point could improve bilateral relations significantly and go a long way toward countering anti-American sentiment. This is the real crux of the matter.

Second, the impasse over the S-400 missiles needs expeditious mitigation and resolution. The United States should offer Turkey the Patriot missiles as an alternative and return Turkey to the F-35 program. This will require collaboration with Congress in light of CAATSA; here the Biden administration could make good use of the Democratic majority. However, this offer should be linked to a commitment from Turkey  that it not seek other arms that could compromise NATO. An incentive might involve American support for the development of domestic Turkish arms production.

Third, while the Turkish government has not given the U.S. sufficient evidence to warrant Gulen’s extradition, Turkish citizens who have grievances with the Gulenists could be encouraged to initiate lawsuits in U.S. courts. Such a step could demonstrate the effectiveness of American rule of law to Erdogan and to the Turkish public.

Fourth, beyond the specific irritations in U.S.-Turkey bilateral relations, the United States should engage energetically as a mediator in the region. The United States should push for a Turkish-Saudi rapprochement where the two countries find common ground, for example in Syria, Iraq and Libya and in reining in Iran's destabilization efforts. The United States should similarly work toward reducing tensions between Turkey and Israel, and broker a UAE-Turkey non-interference agreement. Turkey should also be given the credit it deserves for its cooperation with Ukraine.

Fifth, the United States can work to depoliticize the Eastern Mediterranean dispute over maritime borders and encourage a collaborative and technical resolution. In the absence of American leadership, this problem will only grow worse. A neutral process, potentially involving a UN committee of experts, needs to be explored, but more proactive engagement by American diplomats is needed.

Sixth, the United States should build on the historical partnership with Turkey where interests overlap: in the Black Sea, Syria, Libya and Somalia. If America wants to reassert its position in world affairs without expanding its military presence, then it needs partners like Turkey to exercise constructive influence in the regions in which it is a vital actor: the Middle East, the Eastern Mediterranean, the Black Sea region, the Caucasus, Central Asia and Europe as well.

Seventh, in the wake of  Biden's Armenia statement, he should make clear that recognizing the suffering of the Armenians was not an attack on the Republic of Turkey.  The United States should instead propose a framework for an opening of the borders between Armenia and Turkey and help the two countries work toward a normalization of relations.

None of these problems troubling U.S.-Turkey bilateral relations is simple. Each one requires goodwill and compromise. Yet unless the United States initiates a broad reconciliation strategy, these problems will fester and eventually explode. Given the danger posed by a potential rupture between Ankara and Washington, the matter is urgent. Biden should seize the opportunity to “build back better” and return this bilateral relationship to a firm foundation.

Because Russia currently poses a growing threat and relations between Turkey and the European Union remain tense, the time is ripe for the United States to step forward as a long-term friend and supporter of Turkey. This is an auspicious moment for Washington to reach out to its ally in order to repair and reaffirm the partnership. It is up to Biden now to work toward a grand bargain as a way to secure Turkey’s commitment to the Western fold.

Russell A. Berman is a senior fellow at the Hoover Institution and Professor of the Humanities at Stanford University.. The opinions expressed here are his own

Dr. Dania Koleilat Khatib is the co-founder and the president of the Research Center for Cooperation and Peace Building (RCCP), a Lebanon-based Track II organization.