America Can’t Turn Away From the Hazara Genocide 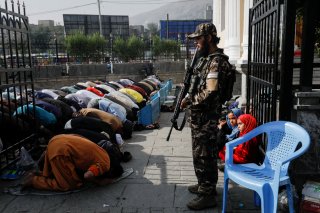 The September 30 attack on the Kaaj Educational Center in Kabul has triggered a global wave of grassroots protests against violence toward Hazaras in Afghanistan. These protests have demonstrated the continued resilience and capacity of the people of Afghanistan to engage in collective action on a global scale, despite the horrors and trauma of the fall of Kabul in August 2021.

The attack, which killed at least 53 young students and injured more than 110 others, was the latest in a pattern of persistent and organized attacks targeting Afghanistan’s Hazaras. Indeed, Human Rights Watch found that Islamic State-Khorasan (ISIS-K) killed or injured at least 700 Hazaras in thirteen separate incidents between August 2021 and early September 2022.

The protest campaign and the support it has garnered from the country’s diverse ethnic, religious, and political groups demonstrate continued grassroots resistance against extremist violence and the Taliban’s repressive rule.

Some specific features of the protest campaign are worth highlighting.

First, it has been a global campaign in both its geographical scope and message. While the initial spark of the protests came from the women of Afghanistan, it has spread to more than 100 cities on five continents.

Subsequently, the campaign is led by a globalized generation of young Hazaras and other activists who have framed it in the universal language of human rights. Consequently, the Twitter campaign attracted the support of major literary figures and human rights campaigners such as the Turkish-British novelist Elif Shafak, the Brazilian author Paulo Coelho, and the Nobel Peace Laureate Nadia Murad.

Murad, a survivor of the Yazidi genocide in 2014 and 2015, urged the international community to act under the Genocide Convention to stop the growing violence against Hazaras. Murad tweeted: “I know from experience that these tell-tale signs of discrimination, targeted killings, and displacement transform into mass atrocities in the blink of an eye.”

Second, there was an unprecedented level of coordination and synchronicity between on-the-ground rallies, marches, and candlelight vigils in various countries, and a spontaneous online campaign centered around the hashtag #StopHazaraGenocide. With more than 10 million tweets, the campaign attracted an unparalleled level of active mobilization by activists calling for an end to the violence against Hazaras.

Third, while the actual protests and online activism were driven by Hazaras, the campaign could not achieve the mass level of support without the participation of members of Afghanistan’s other ethnic communities, including Pashtuns, Hazaras, and Uzbeks. Faryad Darya, one of the country’s most popular singers, actively supported the campaign and personally participated in a rally in Washington, D.C., on October 9.

The globalized and multi-ethnic character of the movement has turned it into a powerful moment of solidarity and unity among Afghans, especially in the context of the trauma and disruptions of the country’s fall into the hands of the Taliban.

The movement was an important recognition of the Hazaras’ history as victims of genocide and the growing risk of genocide the community faces under the Taliban.

As a distinctive ethnic group that mostly follows Shia Islam in a country dominated by Sunni Muslims, the Hazaras have historically been singled out as targets of extremist violence and state-led persecution.

The formation of Afghanistan as a modern state began with a series of violent conflicts under the reign of Amir Abdur Rahman Khan, who ruled the country from 1880 to 1901. Khan waged and directed a particularly bloody campaign of violence from 1891 to 1893 against the Hazaras, which he termed a jihad, or holy war. I have argued that the campaign resulted in what contemporary international law defines as genocide and was comparable in its ferocity and intensity to other major mass atrocities of the era, such as the genocide of Armenians in the final days of the Ottoman Empire.

Hazaras commonly believe that they lost more than 62 percent of their population between 1891 and 1893 due to killing, starvation, famine, and the state-sanctioned enslavement and sale of Hazara men and women.

However, the trauma of genocide and marginalization for the Hazaras is not merely a historical matter. Despite the political and cultural openings in Afghanistan after 2001, the Hazaras faced continued discrimination and new types of violence from the Afghan state.

The Hazaras demonstrated a particularly high level of enthusiasm toward modern education, sports, cultural programs, and human rights activism. As a result, Hazaras produced some of the country’s brightest students, sports heroes, civil society leaders, and cultural figures. Yet, these very same opportunities for overcoming historical marginalization increased their vulnerability to another phase of hatred and violence. With the emergence of ISIS-K in 2015, a new wave of violence targeted Hazara mosques, cultural centers, buses, schools, and even maternity hospitals. As a result, Hazara neighborhoods such as Dasht-e Barchi in Kabul have been dotted by frequent bombing and suicide attacks.

Nevertheless, the Hazaras have pushed back against the surge of violence against their cultural and educational centers. The Kaaj Educational Center is a case in point. In August 2018, when it was operating as the Mawoud Academy, it was targeted by a suicide attack that killed at least forty-eight students and injured dozens of others. Following the tragedy, the center was renamed, only to become the site of another tragedy.

Since returning to power in August 2021, the Taliban has steadily closed spaces for the expression of dissent. By eliminating opportunities for peaceful protests, the Taliban regime has pushed dissenters to go either online or underground with the several armed insurgencies.

The women who marched in the streets of Kabul, Herat, and Bamyan were quickly met with Taliban violence. The Taliban also actively undermined the capacity of women to organize new protests. For example, on October 2, a large number of Hazara girls at Kabul University’s dormitory were reported to have been severely poisoned. Subsequently, it was reported that three girls died as a result of poisoning and the Taliban expelled at least sixty students, mostly Hazara girls, from Kabul University’s dormitory. On the following day, it was reported that the Taliban had locked another group of girls inside Balkh University’s dormitory in the northern city of Mazar-e Sharif.

Since gaining power, the Taliban has launched a concerted effort to strip away Afghans’ most fundamental human rights. It is widely documented that women are the primary victims of the Taliban’s gradual return to its draconian gender policies of the 1990s. By effectively erasing women from government institutions and implementing policies such as the banning of girls’ education beyond the sixth grade, the Taliban has effectively imposed gender apartheid, with women completely excluded from public life and placed under the mercy of men. However, while women’s rights have been the focus of much of the (diminishing) attention on Afghanistan, the treatment of ethnic and religious groups under the Taliban, which causes equally important harm to human rights and security, has often failed to attract much international interest.

To counteract the #StopHazaraGenocide campaign, the Taliban launched #UnitedAfghanistan as an alternative. There are significant differences between the nature of the Hazara genocide campaign and the Taliban’s use of social media. The group first began using social media as an instrument of propaganda during its violent campaign against the former government and its international allies. Since assuming power, the Taliban has used social and traditional media to dominate the information space.

The Risk of Genocide and Mass Atrocities

The UN Framework of Analysis for Atrocity Crimes identifies fourteen risk factors that are associated with crimes such as genocide and crimes against humanity. This includes two specific factors that are closely associated with many contemporary genocides. First, genocides are linked to intergroup tensions and patterns of discrimination against protected groups. As an atrocity that is characterized by group-based violence, genocide is often the most violent expression of long periods of intergroup tensions and discrimination. For example, there was a long history of anti-semitism well before the Holocaust. Second, genocides are most likely when there are signs of intent on the part of some groups to destroy others. Since its emergence in 2015, ISIS-K, which has claimed responsibility for most of the attacks on the Hazaras, has frequently expressed its intent to commit genocide against the Hazaras—in both its actions and words.

The Taliban itself, which is now responsible for the protection of Hazaras as the country’s de facto ruler, has a long history of violence against the Hazaras. In August 1998, after taking control of the city of Mazar-e Sharif, Taliban militias carried out a series of targeted killings of the city’s predominantly Hazara residents, which the journalist Ahmad Rashid described as “genocidal in its ferocity.”

Since it forcefully took control of Kabul in August 2021, the Taliban has instituted a series of measures that contribute to the genocidal process of destroying, marginalizing, and effectively subjugating the Hazaras as a distinct religious and ethnic group. The group has effectively pushed the Hazaras out of government and the security institutions at the national and local levels, leaving the Hazaras effectively powerless in the face of de facto government repression and violence by groups like ISIS-K. Indeed, Amnesty International has documented several incidents of deliberate extrajudicial killings of Hazaras by Taliban forces in the provinces of Ghur, Ghazni, and Day Kundi.