Nationwide Protests in Afghanistan After Attack on Hazaras 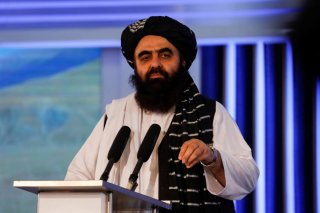 Hundreds of women across Afghanistan marched in protest against an ongoing campaign of violence directed at the country’s Hazara ethnic and religious minority following a suicide bomb attack on Friday targeting a Hazara school in Kabul.

The United Nations Assistance Mission in Afghanistan (UNAMA) announced on Monday that at least fifty-three people died following the attack on the Kaaj Educational Center on Friday. The statement observed that at least forty-six of the casualties had been “girls and young women” studying for a university entrance exam. It noted that an additional 110 bystanders had been wounded in the blast, although it provided no information on the severity of their injuries.

On Friday morning, following the sound of gunfire outside the building, an armed militant entered the classroom and detonated an explosive vest inside, according to local sources. No group has yet claimed responsibility for the attack, and the Taliban—though widely denounced for its atrocities against the Hazara during its twenty-year insurgency against the U.S.-backed government—swiftly condemned it, describing it as a “great horror” and vowing to ensure accountability.

In response to the bombing, hundreds of women held protests in the provinces of Kabul, Balkh, Herat, and Bamiyan, condemning violence against the Hazara population, who are mostly Shi’a Muslims in the predominantly-Sunni nation. Protesters framed the ongoing violence against the people as an attempted genocide and argued that the Taliban-led government had failed in its responsibility to protect them from harm. Many demonstrators also criticized the country’s new government for its growing restrictions on women’s rights, including the continued closure of girls’ schools across the country. Taliban forces attempted to disrupt the protests by firing guns into the air, according to videos posted to social media.

Concurrently with the demonstrations in Afghanistan, protests against anti-Hazara violence were held in several Western nations, including the United States and Sweden, and the hashtag #StopHazaraGenocide went viral on Twitter, appearing in more than one million tweets over the weekend.

Attacks against Hazaras have become a regular occurrence throughout Afghanistan’s forty-year war—and particularly since the rise of the Islamic State-Khorasan Province (ISIS-K), the local affiliate branch of the Islamic State terror group, which considers Shi’a Muslims apostates. In the previous year, another attack on a girls’ school in the Dashte Barchi neighborhood of Kabul killed more than 100 children, mostly girls, and injured 300 others. An earlier attack against a Hazara educational center in October 2020 killed an additional twenty-four civilians, injuring fifty-seven. ISIS-K is thought to have been responsible for both attacks.