America Should Capitalize on Europe’s Unlikely Comeback from the Coronavirus 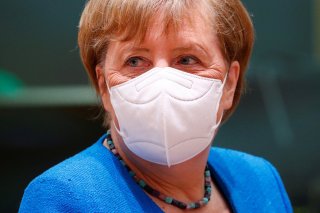 A few months ago, Americans were praying for Europe. As the coronavirus ravaged the continent, they watched the lockdowns in Italy, worried about infection rates in Spain, and sympathized with Brits when Prime Minister Boris Johnson became ill. European countries took health security into their own hands, leaving a coherent, continent-wide approach in the dust. Following several years of fractious discord, the Europe of 2020 appeared more distracted and divided than ever.

But then, as the United States descended into the abyss of the coronavirus pandemic, a strange thing happened across the Atlantic: Europe staged an unlikely, tentative comeback. This comeback was not only based on the health of its citizens but on a newfound political and economic unity, which could prove to be beneficial for America. If the momentum of this comeback is sustained, then it points to new opportunities in transatlantic relations. The winner of November’s presidential election would be wise to seize those opportunities.

Many Americans were worried about European disunity prior to the pandemic. Brexit removed the closest U.S. ally from the EU and sent both into seemingly never-ending negotiations. Talk of a potential Grexit or even Frexit filled foreign policy discussions. Back in 2018, when French president Emmanuel Macron began calling for a stronger and more unified Europe, EU members like Germany and the Netherlands appeared cool to the possibility of a French-led bloc. As recently as February, the EU could not agree to close a $60 billion budget gap opened by Britain’s departure.

Then came the coronavirus. As the pandemic surged, Germany, France, Italy and others closed borders to their neighbors, Schengen Area be damned. They banned the export of medical supplies even to countries in their common market. As Italy got hit particularly hard, Rome’s calls for financial help met with silence elsewhere in Europe. Most economic projections forecast a European recession deeper and longer than the downturns in North America and Asia. Discord, rather than cohesion, appeared the watchword.

To be sure, the appearance of European weakness no doubt stirred the hearts of a few in Washington. President Donald Trump has called the EU a “foe,” a group formed merely to take advantage of the United States. And yet even members of his administration routinely express support for a strong and unified Europe—the better, they rightly believe, to work with the United States in a world of multiplying challenges. The transatlantic partnership is one of America’s chief geopolitical assets, and it will be critical in an era of intensified competition with Russia and China.

And so Europe’s comeback, though perhaps little noticed by today’s inwardly-focused Americans, augurs good things to come. The continent’s coronavirus infection rates are far lower than those in the United States, though surges continue, and its economy is reopening in a way not yet possible in America. Europe’s unemployment figures are far lower than America’s current double-digit rate, and the EU’s announcement last month of a $880 billion recovery package represented an unprecedented step toward European cooperation. Announcing it along with a $1.3 billion EU budget for 2021-2027, European Council President Charles Michel observed that “Europe is strong. Europe is united.”

Having shown that it can pull together amid crisis, the trick is now for European leaders to sustain their cooperation as the pandemic ebbs. That will be no easy task, and it remains to be seen whether an EU lacking the United Kingdom and, soon, Angela Merkel’s leadership, will fall prey to centrifugal tendencies. But for all the doubts, Europe’s 2020 comeback remains striking.

It also points to a better way for the United States to approach transatlantic ties. Slamming the EU and picking on countries like Germany does little for unity either in Europe or across the Atlantic. Rather than haranguing Europe to buy more cars, export less steel, and spend two percent of GDP on defense, Washington could choose a different course. Both sides of the Atlantic will need to stimulate their economies; trade liberalization, rather than tariffs, can help. NATO burden-sharing remains an important issue, and the allies would do well to focus on defense modernization and niche capabilities instead of arbitrary budget figures. The United States and Europe could harmonize policies on Iran and Russia, support democracy in places like Belarus, build a common approach to China, and more.

A strong and unified Europe would make these tasks easier.

It has been a long year already, with ups and downs on both sides of the Atlantic. But the last few months have seen European countries come together in unprecedented ways. If recent accomplishments are prologue, then transatlantic partners will see new opportunities for cooperation as the pandemic wanes. In a world of heightened competition, and with adversaries that would like to see America fail, both Europe and the United States should not let these opportunities pass by.

Richard Fontaine is chief executive officer of the Center for a New American Security in Washington, DC and served as former foreign policy advisor to Senator John McCain.