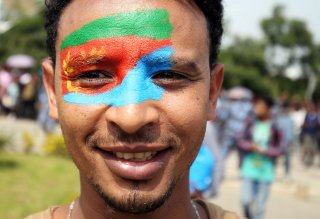 In January 2018, against the backdrop of the immigration debate, President Donald Trump seemed to dismiss all African nations as “shithole countries.” His attitude has not evolved much during the course of his presidency. Speaking at his first post-pandemic rally in Tulsa, Oklahoma on June 20, President Donald Trump disparaged Somalia. “No government, no safety, no police, no nothing, just anarchy,” he quipped, the ultimate irony considering he has gifted Somalia almost $3 billion over the course of his presidency. Trump appears to wallow in a reality which happily is long since gone. Whereas Africa was once a continent embroiled in wars, most countries are now at peace. Many UN peacekeeping missions have gone home. Dictators are increasingly rare as state after state has held democratic elections and witnessed peaceful transitions. As Black Lives Matter promotes socialism if not Marxism in America, Africa itself has largely abandoned socialism and embraced capitalism. The result? More than a billion lifted out of poverty in just the last few decades. To all of Africa’s advances, Eritrea remains an unhappy exception.

Eritrea formally gained independence from Ethiopia and international recognition in 1993 after a three-decade struggle. Initially, there was great hope for the former Italian colony. It could have leveraged its historical links to Europe to kickstart its industry and manufacturing base. It possesses great mineral wealth, and its position astride the Red Sea gave it great economic potential both for trade and transshipment to neighboring and landlocked Ethiopia, Africa’s second-largest country by population. At the time, observers expected warm relations. Isaias Afwerki, president from independence until the present day, was a comrade-in-arms with Meles Zenawi, the president of Ethiopia when they both had fought against Ethiopia’s Marxist regime. Meles was supportive of Eritrean secession.

As Eritrea moved toward independence, there was some hope that Isaias would evolve toward democracy. Certainly, there was reason to be concerned. He was trained in China in the late 1960s, and, according to a New York Times profile, he “became the virtual commissar of a tightly disciplined Leninist organization” in the 1970s. They dropped Marxism in 1986 but did not necessarily embrace democracy as a goal. A 1991 AllAfrica report explained, “The Addis Ababa government argues that political success in Ethiopia requires the immediate granting of full political rights and freedoms throughout the country. The Provisional Government in Eritrea, on the other hand, operates from a belief that in a country without any experience of freedom, democracy must be guided in order to prevent its abuses.” American diplomats at the time reportedly said “they find Mr. Isaias shrewd, tough, but usually reasonable.” Speaking in Tigrigna on Voice of the Broad Masses of Eritrea on June 16, 1993, Isaias promised a multi-party democracy but said his goal would be first to build the institutions to support them. Dan Connell, an aid worker and activist, who chronicled the Eritrean struggle, advised in a 1993 article, “If the Clinton administration is genuinely interested in fostering democracy in Africa and elsewhere in the third world, Eritrea is the place to start.”

That was wishful thinking. Rather than promote democracy, Isaias turned Eritrea into North Korea on the Red Sea. Indeed, Eritrea today often manages to fall behind North Korea in press freedom rankings. Freedom House ranks it alongside North Korea and Syria. Just a year ago, over 100 African dignitaries signed an open letter to Isaias lamenting, “Eritrea has not kept pace with the changes seen elsewhere.  Over the past two decades, Eritrea has been described as the most closed society on our continent, an unfortunate situation for a country with such rich human capital and potential.”

Eritreans are also subject to indefinite conscription with little or no pay. In effect, Isaias enslaves his population. There is a perverse logic to this: By keeping males detained and controlled until well past middle age, he need not worry about opposition forming from civil society or a middle class. Of course, many Eritreans risk life and limb to flee. Isaias is happy to see them go because, if they do survive the journey, they often remit money to family who remained and therefore keep Eritrea above starvation without Isaias being held to account for his failures to develop Eritrea economically.

Isaias’ grip on power might be absolute, but he is not immortal. He is seventy-four-years-old, and both Eritreans and foreign diplomats are already beginning to speculate about the future of Eritrea in a post-Isaias era, especially after alleged health scares.

Paranoia has a price. There is no vice president nor are there any other clear successors as Isaias has systematically removed any rival. Additionally, the constitution does not serve as a guide as, in practice, it remains unimplemented. There is some indication that Isaias wants to pass the torch to his son Abraham, but few Eritreans let alone those outside the country believe Abraham wields a steady hand and so it is uncertain he will be able to maintain or consolidate power or win the army’s support after his father’s death.

In 2013, the International Crisis Group (ICG) reported on possible succession scenarios, but the report was short on details (through no fault of the ICG) and, at any rate, is now dated. During the most recent health scare, a number of names surfaced, but many are old and also in poor health.

By any metric, Eritrea under Isaias has been both a failure and a human tragedy. Eritreans deserve better, and Isaias’ death will allow them to close the door on a sad chapter in their nation’s existence. Every recent U.S. administration has talked about how Africa is a priority, but the United States remains absent without leave across the continent—its diplomats often locked in their compounds by overzealous security officers—as Morocco, Turkey, Qatar, Iran, India, China, and increasingly Russia all vie for influence. Both Democrats and Republicans may recognize that commercial outreach is more important than diplomatic niceties or military force but, in practice, they are unwilling to rethink a U.S. strategy which has not served American interests well.

A democratic state in Eritrea would be of broad benefit for Eritreans and within the region and, indeed, for everyone except for countries like China that seek to co-opt dictatorships and entrap countries with debt. Rather than simply react, the time is now for U.S. officials to reach out to Eritreans, both inside the country and out, and put plans in place to help build the institutions Isaias has left weakened or destroyed. These officials must ensure Eritrea’s continued independence against the backdrop of Ethiopian ambitions, ready the resources to help Eritrea recover and thrive to take its place in the world, and help advance its stability and moderation in an increasingly strategic corner of Africa.