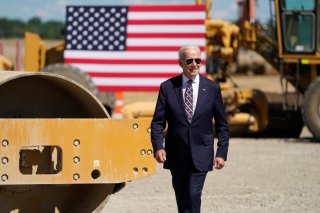 China’s Belt and Road Initiative (BRI) was launched in 2013 as a trillion-dollar mega strategy to build infrastructure and influence across Africa, Asia, the Middle East, Europe, and Latin America. The BRI is a central aspect of President Xi Jinping’s vision for an ascendant China. It is meant to strengthen economic, political, and military linkages to Beijing through development, especially across the Global South.

However, less than ten years since its launch, the veneer has peeled off the BRI facade. It’s time for a reset. The United States can offer a better citizen-centric model for infrastructure development by leveraging American innovation and know-how.

Reports of large-scale corruption, waste, and opacity in BRI infrastructure deals are no longer surprising. As more examples come to light—from roads to nowhere to empty ports, stadiums, and large-scale digital surveillance—Beijing reveals something very important about the BRI. It seems to advantage China and the few officials who make the deals rather than the people who badly need economic security, health, and connectivity.

Governments that do business with China might survive the reputational fallout from overpriced projects and soaring debt. But citizens lose out every time. As one of the authors wrote in 2020, “a close examination of China’s BRI suggests that Beijing’s partners may become saddled with expensive but under-utilized infrastructure, massive debt, and political instability.” For example, Kenya’s over-budget and unfinished $4.7 billion BRI-financed railway ends abruptly in the middle of an empty field in the Rift Valley, a constant physical reminder of the country’s massive debt to China and the lost opportunity for Kenyan citizens.

For the United States, this represents an opportunity to adopt a strategy that provides a more effective alternative to BRI—a model that reinforces sustainable projects, emphasizes anti-corruption and local employment, and allows countries to preserve their independence from China.

Some of the elements are already in place. Initiatives such as the G7 Build Back Better World combine the efforts of the United States and its partners. The United States, Japan, and Australia launched the Blue Dot Network to offer global standards for quality infrastructure development. U.S. equity investments through the newly launched U.S. International Development Finance Corporation (DFC) provide more capital and financing options for global infrastructure projects while encouraging greater private sector investment and partnerships. All of these efforts should be put on steroids.

But equally important is the inclusion of U.S. innovation. As many countries grapple with the economic fallout of Covid-19, food and energy insecurity, and slowing global growth, the immediate needs are pressing. U.S. innovation in key sectors such as health, digital, energy, water, and sanitation, offers an asymmetric advantage over China’s bloated “export” model. While BRI tethers countries to Chinese labor, materials, and extractive loan deals, U.S. innovation can meet local needs quickly and help build economic security for the long term. While the BRI puts assets at undue risk and dependency when bad deals go south, U.S.-led technology, combined with financing and partnerships across business, philanthropy, and government, is meant to build economic strength. And isn’t that the point?

How can we apply innovation for immediate impact while reframing the global infrastructure agenda? By scaling U.S. innovation where it’s needed most. Even small-scale applications can have a big impact, and some companies are already proving it. One example is the American company Zipline, which manufactures and operates fully automated drones to deliver blood, essential medicines, and vaccines instantly and at scale. Zipline’s applications in Ghana, Nigeria, and Rwanda have delivered millions of Covid-19 vaccines together with partners at Pfizer, Gavi, and UPS. Zipline drone deliveries cut missed vaccination appointments by forty-two percent and improve the delivery of essential blood supplies and life-saving care for more than 25 million people across 3,300 healthcare facilities in Africa.

Likewise, the American company Parsyl is making a massive difference in cold-chain vaccine delivery across Africa. Parsyl’s end-to-end data-powered monitoring solution protects health commodities throughout their delivery up to the last mile. In Senegal, Parsyl has already collected over 32.5 million data points and found that replacing or fixing faulty refrigeration could reduce the number of vaccines spoiled due to freezing temperatures by 24 percent.

SINAK, a U.S.-based corporation, is yet another example. Their carbon capture concrete additive and curing solutions reduce the impact of carbon, nitrogen, and sulfur dioxide emissions by more than two-thirds, absorbing vehicle emissions directly into the new or existing pavement and reducing the amount of water required for concrete production. While most economies will continue to be tethered to gas and oil for the foreseeable future, improving air quality and health, and reducing industrial water consumption are still possible.

Although Zipline, Parsyl, SINAK, and many other innovators are working hard to create sustainable businesses in Africa, Asia, and other international markets, more targeted support would allow innovation to scale and spread through new global infrastructure initiatives. The U.S. government spends over $40 billion per year on foreign aid. If it aligned even a fraction of that amount with scaling proven citizen-centric innovations in Africa alone, the results would be game-changing.

The United States should start by creating an innovation fund through which it brings more high-impact technologies into global infrastructure and development investments. The fund should align with DFC and the U.S. Export-Import Bank to support the necessary front-end financing, partnering, and implementation support for U.S. manufacturers.

It is not necessary to compete with China for poorly conceived and managed projects. In contrast to the BRI’s “railroads to nowhere,” the United States can reframe global infrastructure development around the citizens who need it the most. Let’s unleash U.S. innovation now.

Elaine Dezenski is the Senior Director and Head of the Center on Economic and Financial Power at the Foundation for Defense of Democracies.

Allie Dichiara is a senior associate at Total Impact Capital.