Is AOC the Real Leader of the Democratic Party? 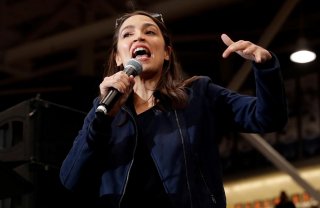 The infrastructure of the Democratic Party is amid a moment of rebuilding.

President Joe Biden took the White House in the middle of political turmoil, in addition to a trio of seething crises jabbing at the stability of the United States, where both major political parties are entirely divided after the age of former President Donald Trump.

While the GOP and its following anticipate a crowded presidential primary in 2024, the Democrats will likely be at an inevitable crossroads that the Biden administration steered the party toward, where they must decide what ideology would successfully carve unity into their roots.

That points to “this new generation,” that Biden identified during a CNN town hall event back in February, one that the president said is “not like us.”

“They’re thinking differently. They’re more open. And we got to take advantage of it,” he added.

Now, who exactly is a part of this “new generation?” And who’s its ringleader?

First, it’s important to consider how Democrats are governing under the Biden administration. Before the president took office, Democratic lawmakers on the left feared the party would take a sharp turn and emerge into a period of moderate politics, where lawmakers like Sen. Joe Manchin (D-W.Va.), a centrist, would be happy. But Biden’s slew of executive actions, $1.9 trillion coronavirus relief package and impending multi-trillion-dollar infrastructure, jobs and climate change bill speaks for itself.

The party is crawling toward its progressive wing. And at the center of it is Rep. Alexandria Ocasio-Cortez (D-N.Y.).

Ocasio-Cortez has become one of the loudest and most-powerful advocates of the Democratic Party’s progressive wing, leading a movement of activists that “rage at the ‘big-money donors’ and ‘establishment players’ . . . who allegedly have stood in the way of measures to decrease economic inequality and reverse climate change,” according to the New York Times.

And the New York congresswoman hasn’t gone unnoticed since Biden seized control of the White House, as she’s made noise at the administration’s legislative actions and inactions and as some of her progressive priorities have seen more-than-expected success since January.

“Given the attention that’s dropped on her when she won her 2018 primary out of nowhere, the poise with which she dealt with a level of celebrity a few in politics ever achieve, with no background, was exceedingly impressive,” said Walter Shapiro, a political science lecturer at Yale University who covered his eleventh presidential campaign for The New Republic.

Most recently, the Biden administration took a major blow from Ocasio-Cortez when she first criticized the president’s infrastructure package, tweeting, “This is not nearly enough. The important context here is that it’s $2.25T spread out over 10 years. For context, the COVID package was $1.9T this year *alone,* with some provisions lasting 2 years. Needs to be way bigger.” The next day, Ocasio-Cortez said to “realistically” handle America’s infrastructure, jobs and climate change issues, the country needs $10 trillion over ten years. And she wasn’t the only lawmaker to support such a big-spending measure.

Ocasio-Cortez was also a prominent supporter of the $15 minimum wage, a measure that largely slowed down the speedy passage of Biden’s relief bill, as Democrats stood polarized on the issue. While progressives, as well as other members of the party pushed for a wage hike, other lawmakers like Manchin and Sen. Kyrsten Sinema (D-Ariz.) rejected the increase.

Biden would have signed the bill if it featured the wage boost, signaling the White House’s apparent split from more moderate Democrats.

The progressive firebrand also backs universal student loan forgiveness, an issue that Biden’s Education Department has been wielding in recent weeks, as Education Secretary Miguel Cardona cut student debt for nearly 72,000 borrowers who were defrauded by their colleges and wiped out the burden for more than 41,000 borrowers with total and permanent disabilities. The department has also extended the pause on federal student loan debt repayments through September.

“Ocasio-Cortez has tapped into young, progressive energy that was not well represented among the most senior members of her party. She is a post-Obama politician who was elected in the 2018 midterm as both a rebuke of Trump and what were perceived to be out-of-touch elements in her party. Her policy prescriptions are built around the Bernie Sanders wing of the party that became especially frustrated after giving way to Hillary Clinton in 2016. And she has been a creative user of media to attract an ardent national following,” Barry Burden, a political science professor and the director of the Elections Research Center at the University of Wisconsin-Madison, said.

While the Education Department’s recent actions don’t mirror Ocasio-Cortez’s priority to universally cut student loans, the president is looking into his “legal authority” to forgive student loans and cancel up to $50,000 per borrower, perhaps some of the most progressive student-loan related moves for a president in history.

Ocasio-Cortez’s political, economic and social goals haven’t just been heard by progressive groups and young voters in the Democratic coalition. White House chief of staff Ron Klain recently met with the New York lawmaker “precisely because he realizes how powerful she’s become and that her political potential is not only unlimited but accelerating at warp-speed,” political and communications consultant Douglas MacKinnon wrote for The Hill.

“No individual matches her support among the progressive Democratic base. Her support for Bernie Sanders no doubt helped him on the campaign trail in 2016 and 2020,” Dr. Ken Mitchell, a professor and chair of the political science and sociology department at Monmouth University, said.

“Ocasio-Cortez certainly challenges the leadership in her party in terms of both substance and strategy, but the movement she represents has been integrated into the party's operations more smoothly than the disruptive appearance of the Tea Party on the Republican side of the aisle almost a decade earlier,” Burden said.

Ocasio-Cortez has positioned herself in the national spotlight ever since unexpectedly kicking 10-term incumbent, Joe Crowley, from his seat in the 2018 midterm elections, becoming the youngest congresswoman in U.S. history. The now thirty-one-year-old former bartender propelled conversations among 2020 presidential candidates about her Green New Deal, lobbied colleagues about lining up behind Medicare For All and tried to offer reforms for campaign finance. Also, she has built a massive social media presence with more than 12.6 million Twitter followers and has developed a unique intimacy with voters, using Instagram Live to cover questions ranging from the Jan. 6 attack on the Capitol to her cooking black-bean soup.

Given her soaring national profile, there’s been heavy speculation that she’ll compete against Schumer for his Senate seat and even take a crack at running for president in the future.

“She has a lot of choices. Does she want to stay in the House? She will have a safe seat and increasing clout,” Shapiro said. “Does she want to gamble on a Senate seat, such as running against [Sen. Kirsten] Gillibrand in [2024], which seems to me a much infinitely, more logical primary route than challenging Chuck Schumer in 2022.”

Although Ocasio-Cortez has coined celebrity-like status across the country, the question that still looms is how the progressive generation of voters “might actually ‘seize’ power and ‘rewrite the rules,’” Kazin wrote.

“For sure, [Representative] Ocasio-Cortez is very good at drawing media and public attention, and she does give the appearance of having moved the Democratic Party' brand further left,” Kevin R. Kosar, a resident scholar at the American Enterprise Institute, said. “How effective she has been at governing is less clear to me. Her salience has enabled the GOP to hammer the Democrats as the party of socialism, a message that is effective.”

Kosar added, “To date, she also has not managed to get the minimum wage raised to $15, a signature issue for her.”

While Ocasio-Cortez’s priorities like the $10 trillion infrastructure and jobs package, a $15 federal minimum wage, universal student loan forgiveness, the Green New Deal and Medicare For All have been crucial Democratic talking points, nearly all of her legislative initiatives have not seen success on Capitol Hill.

“Somebody who had never run in a bigger election than a low turnout primary in New York City is not exactly the voice of the Democratic Party,” Shapiro said.

The progressive faction of the Democratic Party has continued to flourish in recent years, but its ideas may not strongly represent the scope of the party’s ideology. But far-Left lawmakers and voters, however, do have one advantage among other intraparty divisions: they are confident that Democrats will evolve toward a more progressive edge.

“She’s a compelling person… for those that don’t know her. The story is impressive. She’s handled herself well,” Shapiro said. “But . . . I could think of 100 people who better emblemize the Democratic Party than the only person in public life right now who’s known by her initials.”