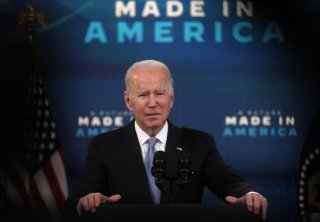 At next week’s State of the Union Address, President Joe Biden is almost certain to cite last year’s strong economic recovery as evidence that the U.S. economy has prospered under his stewardship. A more objective look at the data would reveal a more troubling economic picture. Not only has inflation soared to a forty-year high under Biden’s watch. The budget deficit and the trade deficit have both ballooned to levels that must raise serious questions about the country’s long-term economic growth prospects.

Biden’s signature economic legislative achievement to date has been the March 2021 passage of the $1.9 trillion American Rescue Plan. That budget stimulus came on top of the previous year’s $3 trillion bipartisan budget support packages in response to the Covid-induced economic recession. This meant that, over the past two years, the economy received a combined budget stimulus amounting to a staggering 20 percent of the size of the economy.

There can be no gainsaying Biden’s claim that last year his massive budget stimulus contributed to the fastest rate of economic growth since 1984. Nor can one dispute the fact that his stimulus helped boost employment by more than a record 6.5 million jobs, which allowed unemployment to return close to its pre-pandemic low.

The troubling yet very pertinent question, however, which Biden is unlikely to raise at next week’s State of the Union Address, is at what price to future economic prosperity was last year’s strong economic performance achieved?

As former Treasury Secretary Larry Summers correctly warned last March, the excessive Biden budget stimulus has contributed to a surge in consumer price inflation to 7.5 percent, or to its highest level in the past forty years. It did so by adding excessively to aggregate demand at a time when monetary policy was extraordinarily accommodative and when disruptions to the global supply chain were causing an array of supply shortages.

This surge in inflation has already led to a decline in wages in inflation-adjusted terms. It is also all too likely setting us up for a hard economic landing in the run-up to this November’s midterm elections that could tip the economy into another recession. With inflation now running at a rate well above its 2 percent inflation target, the Federal Reserve will have little alternative but to slam on the monetary policy brakes by raising interest rates to return the inflation genie to its bottle. That, in turn, could very well be the trigger that bursts today’s equity and housing market bubbles which have been caused by the Fed’s earlier monetary policy largesse and which have been premised on the assumption that today’s ultra-low interest rates will last forever.

The Biden budget stimulus has also contributed to the widening in the budget deficit to levels seldom experienced before in peacetime. That is likely to have compromised the country’s long-term economic growth prospects by having put the country on an unsustainable debt path. In that context, the non-partisan Congressional Budget Office estimates that the public debt already exceeds 100 percent of GDP, which is higher than it was at the end of the second world war. It also has warned that on present policies, over the next thirty years the public debt level could double to 200 percent of GDP.

Another way in which the Biden budget stimulus is likely to have compromised the country’s future economic growth prospects is by having contributed to a widening in the trade deficit to a record $850 billion in 2021. In time, that widening together with the country’s unsustainable public debt path could raise serious questions about the dollar’s current favorable status as the world’s dominant international reserve currency and precipitate a flight from the dollar.

One has to hope that the Biden administration does not believe the economic rhetoric that Biden will all too likely pedal in next week’s State of the Union Address. Rather, one must hope that it recognizes the country’s serious economic challenges and that at a minimum it refrains from further contributing to those challenges by engaging in additional unfunded public spending.