In 2022, Inflation Won’t Be Our Main Economic Problem 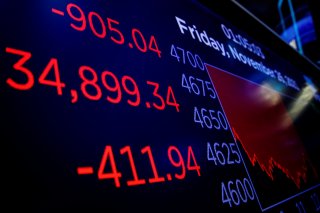 My years of working as an economist on Wall Street taught me that all too often the consensus economic view turns out to be very wrong. A striking instance of such an error was the spectacular failure of the economic profession to anticipate the 2008-2009 Great Economic Recession. A principal reason for that forecasting error was the failure of most economists to take into account financial market considerations.

Next year is shaping up to be another year when the consensus economic forecast will prove to be way off the mark for a similar reason. Whereas the consensus view now seems to be that inflation will be 2022’s main economic problem, it seems more probable that once central banks start tightening monetary policy to control inflation, the bursting of today’s global “everything” asset price and credit market bubble will be our principal economic headache. When those bubbles burst, inflation will be the least of our economic problems as was the case during the 2008-2009 economic recession.

If before the Omicron variant appeared on the scene inflation was not generally regarded as next year’s main economic challenge, it has now become so. In Congressional testimony this week, Federal Reserve Chair Jerome Powell, the erstwhile main proponent of the “inflation will be transitory” school of thought, is now counseling that transitory be removed from the inflation lexicon. In a similar vein, the Organization for Economic Cooperation and Development (OECD) is now warning that Omicron will keep the global supply chain disrupted and that in turn will keep inflation high.

Anyone doubting the pervasiveness of today’s global “everything” asset price and credit market bubble need only take a look at the financial stability reports put out by the Federal Reserve, the European Central Bank, and the International Monetary Fund.

Those reports reveal that global equity valuations are at extremely stretched levels while housing price bubbles characterize all too many economies including that of the United States. They also show that record amounts of money have been loaned at very low interest rates to highly risky borrowers in both the advanced and the emerging market economies. At the same time, exotic asset markets like those for the cryptocurrencies have gone through the stratosphere.

One reason to think that inflation will not be our main economic problem in 2022 is that the Fed is already giving signals that it will soon start shifting to a tighter monetary policy stance with a view to bringing inflation under control. In particular, Powell has now announced that at its next meeting the Fed will be discussing the case for accelerating its present pace of bond-buying tapering. That presumably would pave the way for interest rate hikes before the middle of the year.

Another factor that could cool inflation next year might be the Omicron variant. If this variant turns out to be very much more transmissible and vaccine-resistant than was the Delta variant, it could have the effect of stopping the global economic recovery in its tracks, thereby reducing inflationary pressures.

However, the primary reason to think that inflation will not be our main economic problem next year is today’s global everything bubble. That bubble, which is very much more pervasive than was the 2006 U.S. housing and credit market bubble, has been premised on the assumption that low interest rates will last forever, and that world economic growth will continue indefinitely at a satisfactory clip. If the Fed does start hiking interest rates or if the Omicron variant proves to be a major headwind to world economic growth, there is every prospect that those premises would have been belied and today’s global everything bubble would burst.

To be sure, today’s U.S. and world banking systems are in a very much better position to cope with bursting asset prices and credit market bubbles than they were in 2008. However, the world today is very much more indebted than it was in 2008 and the all-important and unregulated non-bank sector of the economy is over-leveraged. This makes it all too likely that if today’s everything bubble was indeed to burst, both the United States and the world economies will have a hard landing.

In planning for the year ahead, economic policymakers should pay less attention to the consensus economic forecast and more attention to today’s everything asset and credit market bubble. Maybe then when those bubbles burst, they will not be caught out as flatfooted as they were in 2008.