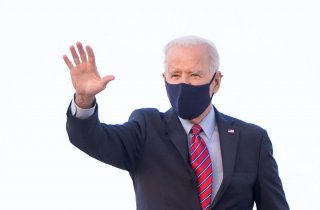 “Anyway, all kidding aside,” President Joe Biden remarked, after starting his first speech on foreign affairs with a modest joke. Perhaps the humor would have been more welcome if it had been followed by a serious talk that showed the administration is ready to meet the challenges of a world troubled by great-power competition. Unfortunately, it wasn’t.

Strategic leadership is a blend of rhetoric and action. For sure, soaring words matter. Who can forget Ronald Reagan telling Moscow to “tear down that wall”? The speech was unforgettable. Reagan’s oratory still rings because the wall came down. In contrast, former President Barack Obama gave a very well-received speech in Cairo to the Muslim world. Yet few remember a single word of it. That’s because there was no action to match the rhetoric. In fact, the region got worse in the aftermath of the speech. The Islamic State caliphate ran wild, building a terrorist enterprise the size of a country.

In the age of great-power competition, where the world doesn’t simply do what the United States asks, action must match rhetoric. Arguably, action matters even more than words, because America’s competitors don’t care what it has to say. They care about its actions. Donald Trump’s foreign policy is a case in point. His rhetoric was often out-of-tune to many in the world, but his actions safeguarded U.S. interests and were often spot on.

Biden’s maiden foreign policy speech at the State Department got some “atta-boys” for delivering a “major shift in foreign policy,” mostly for sounding nothing like Trump. There was a lot missing, however, that would offer any confidence that the administration’s actions will be up to the president’s verbiage.

Biden says he will be tough on authoritarian regimes. All his first steps, however, did the opposite. In his speech, Biden crowed about extending the New START agreement. That’s as far from being tough on Russia as pot roast is from taking center stage at a vegan feast. The agreement makes Vladimir Putin’s life easier. On the other hand, allowing Russia to continue to build-out its arsenal, the weak verification provisions in the treaty, and not tying the agreement to arms control negotiations with China, do absolutely nothing for us. The extension certainly doesn’t show a brave face to Putin. He couldn’t sign the extension fast enough, happy to escape the tough negotiating Moscow was getting from the Trump team.

The president also waved a finger at China. He lectured the Burmese military for overthrowing their civilian government, and has already declared it a “coup,” which has legal implications for U.S. assistance programs. Everyone is watching closely to see what other sanctions are in the offing for the junta. The response has to be tough if Biden wants his rhetoric to mean anything. Pulling punches after such a lead-up will damage the country’s focus on human rights, which Biden claims to have an interest in improving.

In the Middle East, Biden’s first steps seem to be more focused on empowering and enabling Iran and distancing the United States from the Arab nations than trying to constrain Tehran.

At the same time, while Biden said virtually nothing to make America’s competitors nervous, he undermined the serious nature of the speech by prioritizing his leftist, progressive wish-list as over great-power competition and keeping America safe, free and prosperous. Issues like climate change ought to be addressed in foreign policy, but the policies ought to be credible. And they should put the vital interests of the American people first, and pay attention to the nefarious forces in the world that are out to get us.

Making foreign policy just another occasion to tick off the items on the liberal punch-sheet is not the world-class foreign policy that the Biden team promised to Americans. Indeed, rather than be cowed by the president’s determination to dedicate all of America’s foreign policy might to addressing gender issues, those nefarious forces are probably smirking.

Perhaps there is some real steel in the administration’s spine and a serious foreign policy waiting to emerge after the empty, and actually unhelpful, leftist rhetorical flourishes of the first one hundred days. Time will only tell.