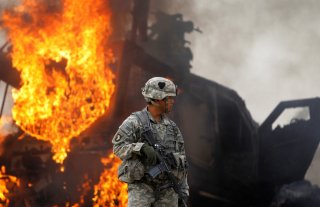 The nearly two-decade-long war in Afghanistan has become a Rorschach Test for many Americans, so it is unsurprising that President Joe Biden’s troop withdrawal announcement was met with mixed reactions. For years, people of good faith have debated the efficacy of continuing military operations in Afghanistan. On one side are those who lament the painful sacrifice and loss of national treasure fighting the so-called ‘forever wars’ where winning is simply not possible. For them, Biden’s withdrawal decision is welcome but long overdue. Former President Barrack Obama captured this sentiment in his public statement, “It’s time to recognize that we have accomplished all that we can militarily, and bring our remaining troops home.” Alternatively, there are those who believe Biden’s decision to “abandon” Afghanistan is strategically “reckless” and a “moral travesty.” They argue that the administration should garner the political will to ‘stay the course’ and maintain a modest, enduring military footprint at a sustainable cost similar to the arrangement in South Korea, where the United States has stationed troops for seven decades in a theater without a formal peace treaty.

Exasperated by these longstanding but diametric viewpoints and a war-weary public, Biden said that Afghanistan “was never meant to be a multi-generational undertaking.” After seeking counsel from his national security advisors and without a consensus on the way ahead, Biden reportedly overruled senior military leaders who advocated for keeping a small military presence to “prevent Afghanistan from once again becoming a haven for terrorists.”

In framing his decision, Biden argued that the United States accomplished its objectives in Afghanistan by 2011 and the reasons for remaining in the country over the last decade “are becoming increasingly unclear.” He attributes this ambiguity to the perpetual “cycle of extending or expanding our military presence in Afghanistan, hoping to create ideal conditions for the withdrawal, and expecting a different result.” Moreover, this approach results in an open-ended commitment as there will always be reasons why now is not the right moment to leave. To break the cycle, Biden presented a calendar-driven withdrawal timeline that begins in May and concludes no later than Sept. 11, 2021. This is three months later than the original deadline established by former President Donald Trump in the bilateral peace agreement with the Taliban signed on Feb. 29, 2020.

While many have criticized Biden’s rationale in the days following the announcement, he should be credited with making a difficult decision (and one fraught with risk) based on a prioritization of Afghanistan against the myriad global challenges to U.S. national security interests articulated in the intelligence community’s Annual Threat Assessment. To be clear, Afghanistan will continue to present a terror threat but Biden reasons that “we’ll be much more formidable to our adversaries and competitors over the long term if we fight the battles for the next twenty years, not the last twenty.” Time will tell if this strategic calculation is correct.

The withdrawal declaration brings a disappointing conclusion to U.S. military operations in Afghanistan and raises questions about its role as a reliable security partner. Afghanistan president Ashraf Ghani offered a somewhat lukewarm response that the country “respects” Biden’s decision” and will continue to work with the United States and NATO “as we move into the next phase of our partnership.” Meanwhile, Fatima Gailani, one of four women negotiating with the Taliban worries that a “withdrawal without having a peace settled in Afghanistan is . . . irresponsible.” To address concerns about continued U.S. commitment, Secretary of State Antony Blinken made a trip to the country the day after Biden’s address to deliver the message that “the partnership is changing, but the partnership is enduring.”

Despite hopes that the Taliban would be in a weakened position because of U.S. and coalition counterinsurgency operations (recall the ‘surge’ of more than one hundred thousand troops during the Obama administration), it is instead poised to emerge as a powerful force in any future Afghan government once the withdrawal is complete. Moreover, with Biden’s commitment to withdraw U.S. forces assured, an emboldened Taliban believes that it has already “won” the war against the superpower and, therefore, has no incentive to reconcile with the “puppet regime” in Kabul. This complicates the goal of securing a political solution that maintains human rights, individual liberties, and the advancement of women in the country.

While Biden’s announcement brings an end to U.S. military involvement in Afghanistan, both the brutal conflict and its associated violence will continue. With the Taliban already controlling much of the country, the Afghanistan National Defense and Security Forces (ANDSF) will be hard-pressed to maintain security once U.S. and coalition military advisors depart and critical enablers such as logistics and air support are significantly reduced or discontinued.

The situation presents an eerie sense of déjà vu reminiscent of the 1988 Soviet withdrawal from Afghanistan that resulted in the collapse of the Najibullah government and subsequent civil war which brought the Taliban to power. While such bleak images may be overstated as the times have changed and many Afghans and other stakeholders will fight to defend the progress achieved over the last twenty years, the risk of instability remains a threat to U.S. national interests. This is why Biden pledged to “hold the Taliban accountable” for its commitments under the aforementioned peace agreement.

To provide options for the president, the military will reposition capabilities and posture to conduct counterterrorism operations from “over the horizon” if required. The combatant commands will also plan more robust contingency operations to address the potential resurgence of Al Qaeda or other terror groups in Afghanistan, similar to the rise of the Islamic State in 2014 that necessitated the return of U.S. troops to Iraq. Such missions are resource-intensive, logistically challenging, and more expensive than operating from within the country.

The withdrawal of U.S. troops also presents a number of unknowns that extend beyond Afghanistan’s internal security situation and include the role and ambitions of regional actors including Pakistan, India and Iran, in addition to external powers such as China and Russia. This increased uncertainty underscores the importance of intelligence that will “diminish” after the withdrawal deadline, according to CIA Director William Burns.

The Biden administration’s continued political, economic, and humanitarian engagement will help offset the military deficit and provide awareness of the security situation in Afghanistan. Additionally, the U.S. embassy includes attaches and security cooperation officials who will continue to assist the ANDSF.

While the future of Afghanistan is yet to be written, there a couple of possibilities worth considering. The pessimistic version views the U.S. experience as the latest example of why Afghanistan is often referred to as the “graveyard of empires” and a morass of never-ending violence and corruption that cannot be “solved.” A more optimistic scenario considers the case of Vietnam, where the chaotic fall of Saigon in 1975 following the U.S. withdrawal did not produce the geopolitical debacle that some predicted at the time. In fact, Vietnam currently enjoys a strong economy and a comprehensive partnership with the United States based on common interests.

A lot can happen between now and September, but it appears America’s ‘longest war’ in Afghanistan is finally coming to an end—at least for now.