The Call for New Climate Policy Amid a Political Transition 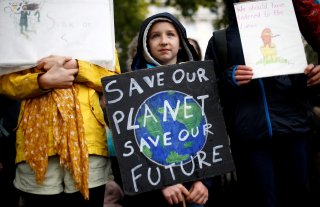 On the eve of the first debate between President Donald Trump and former Vice President Joe Biden, energy and climate policy is one among many topics on which the two candidates have sharply disagreed. Such differences are appropriate in America’s democracy but regrettable in that the dispute largely remains an argument about reality and climate science rather than about how best to address a looming global challenge from which the United States has not been and will not become immune. A true policy debate is the necessary path to a bipartisan federal climate policy, which is the only mechanism through which the United States will be able to implement a sustained approach to a danger that will extend beyond the good fortunes of one political party or another.

From this perspective, Trump’s recent claim that the world will start getting cooler and Biden’s characterization of the president as a “climate arsonist” following West Coast wildfires are not helpful. A true policy debate that illustrated the similarities and differences between the two candidates and, for that matter, between the candidates and their own parties, would be far more valuable.

Among broad similarities between the candidates, consider that like Trump’s energy policy, former Vice President Biden’s climate plan does not exclude nuclear power or fossil fuels with carbon capture despite considerable pressure on Biden from progressive Democrats. Indeed, as Rep. Alexandra Ocasio-Cortez (D-NY) and Sen. Edward Markey (D-MA) prepared the Green New Deal Resolution, over six hundred climate organizations signed a joint letter demanding that nuclear and fossil fuel power be excluded from America’s future power system. Neither Biden’s climate plan, the Biden-Sanders Unity Task Force, nor the Democratic Party Platform have taken that position. It is reasonable to assume that Biden and his campaign team are responsible for these outcomes.

Like Trump, Biden stresses energy’s role in economic growth, creating jobs, and competing with China. While few may remember, then-Senator Biden was among the 95-0 Senate majority behind the 1997 Byrd-Hagel Resolution, a powerful statement to the Clinton administration that senators would reject any international climate agreement that “would result in serious harm to the economy” or that required developed countries to limit or reduce greenhouse gas emissions if developing countries did not make commitments too. Adopted months before United Nations climate negotiations in Kyoto, Japan, the overwhelmingly bipartisan Byrd-Hagel vote preemptively foreclosed America’s participation in the key agreement to emerge from the talks, the Kyoto Protocol. China’s soaring greenhouse gas emissions—which overtook America’s in 2005 and have now reached roughly double U.S. levels—had already become a key concern at that time.

Looking within the two parties, there are gaps between Trump and some Republicans, especially in the Senate, over the reality of climate change and around energy innovation. Notwithstanding Trump’s position, a long list of Republican Senators now acknowledge that climate change is occurring in their states. Similarly, while the Trump administration has repeatedly sought deep cuts in the Department of Energy’s research budget, bipartisan majorities have sustained and increased funding. In early 2020, the administration publicly unveiled another such attempt during the same week that House Republicans planned to put forward their climate innovation proposals.

Where Trump has distanced himself from policy and political climate pragmatists in his own party, Biden has aligned with Democrats arguing for more practical approaches, including on nuclear power and carbon capture, as noted above. Not every Biden proposal is realistic, of course—some elements of his $2 trillion plan are probably too ambitious financially, socially, and politically. Biden’s stated goal “to achieve a carbon pollution-free power sector by 2035,” a symbolic but likely unattainable concession to Democrats who want a more aggressive climate policy, establishes a deadline comfortably beyond the end of a hypothetical second Biden term as president.

Should Biden prevail in November, then the differences between pragmatic and progressive Democrats are likely to become increasingly evident, especially surrounding nuclear energy, carbon capture, and coal, reflecting policy differences between the Democratic Party’s labor and environmental constituencies. Those differences will also reflect the gap between the people who would be satisfied with a good climate policy and the people who prefer to hold out for what they view as the “best” climate policy, even if it means doing nothing. Biden, who had already been in the U.S. Senate for eight years when Ronald Reagan became president, may remember Reagan’s success in accepting compromises that advanced his goals; as Reagan told then-New York Times correspondent Leslie Gelb in 1985, “if I can get 70 or 80 percent of what it is I’m trying to get, yes, I’ll take that and then continue to try to get the rest in the future.”

The good news for those who favor some federal climate policy over none is that the differences between and among Congressional Democrats and Republicans may create space for bipartisan solutions that satisfy pragmatic centrists in both parties. A new energy and climate proposal by Reps. David McKinley (R-WV) and Kurt Schrader (D-OR) may present one such opportunity. When the 117th Congress convenes next year, this and other ideas may prompt the policy conversations necessary to produce effective and enduring policies to modernize America’s energy sector, boost U.S. competitiveness, and combat climate change.

Meanwhile, the Trump-Biden debates will probably do little to illuminate the real similarities and contrasts between the two candidates or their parties on energy and climate policy. And with Beijing taking diplomatic credit for a clean energy transition as much (or more) about energy independence and reducing vulnerable energy imports than about climate even as it wins stronger positions in global energy technology markets, America’s failure to talk seriously about energy and climate policy could have geopolitical as well as environmental consequences.

Paul J. Saunders is president of the Energy Innovation Reform Project. He was previously Executive Director of the Center for the National Interest (CFTNI). He remains a member of the center’s Board of Directors and remains a senior fellow in U.S. Foreign Policy at CFTNI.