Can Netanyahu Deter Iran and Make Peace With Saudi Arabia? 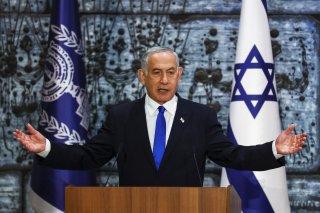 The next Israeli government will not have a grace period. Before its ministers settle into their new offices, the government must deal with urgent security matters.

The Islamic month of fasting, Ramadan, is quickly approaching and will commence in late March 2023. The Ramadan period is notorious for a surge in religious extremism, clashes between Israeli security forces and Palestinians, Israeli-Arab domestic terrorism, and other incidents.

On day one, the clock will start ticking for the new government to make quick policy decisions to deal with such scenarios.

A key priority for the new government will be to formulate a policy on how to deal with the ongoing wave of terrorism in the West Bank, which has been carried out both by organized cells and lone-wolf assailants. It will also need to chart its course on Hamas in Gaza.

Within Israel itself, the government will need to deal with the out-of-control availability of firearms in the Arab-Israeli community.

It will also have to decide immediately how to handle the fractured Palestinian Authority (PA) in the West Bank, which has seen a systematic loss of sovereignty and control.

The power vacuum has been filled by local terror groups that have banded together based on their geographical location, rather than organizational affiliation. This has occurred in Jenin and Nablus, and Hebron could be next.

This is occurring against the backdrop of a developing economic crisis within the PA stemming from an inability to cover a growing deficit, sustain its administrative machinery, or initiate future development projects.

At the same time, the United States, which heads the international system, is signaling to the incoming Israeli government that it intends to be more involved in the Palestinian arena, especially in the West Bank. This in turn has led to growing European involvement, as neighboring Arab states, primarily Jordan and Egypt, are closely observing what will be done in response to the PA’s situation.

Countries that are part of the Abraham Accords and are internally affected by events in the West Bank are closely watching too.

Likud Chairman and incoming prime minister Benjamin Netanyahu views establishing ties with Saudi Arabia as a major goal for expanding the Abraham Accords and seeks to achieve swift diplomatic success with Riyadh in his first year in power.

Yet this goal is overshadowed by the objectives of Netanyahu’s right-wing political partners, who want to transform the status of the West Bank, known in Israel as Judea and Samaria. They wish to see these territories become a de facto part of Israel and their strategy includes removing the Israel Defense Force’s (IDF) Civil Administration from the Defense Ministry, legalizing illegal outposts, and changing laws governing the Jewish population of Area C of the West Bank.

It is also worth asking what kind of policy Netanyahu and his government could adopt regarding Gaza and Hamas, the terror entity that rules the Strip. For its part, Hamas is attempting to ignite the West Bank, undermine the PA, weaken President Mahmoud Abbas, encourage terrorism within Israel, and pursue its strategic goal of taking over the Palestine Liberation Organization (PLO) and increasing its power in the West Bank.

Israel, under both outgoing Prime Minister Yair Lapid and during previous Netanyahu governments, sought to create a truce in Gaza and reinforce it by offering humanitarian-economic steps for the Strip. Currently, that means enabling some 17,000 Gazans to enter Israel for work daily even as Hamas builds up its military-terrorist capabilities and calls for Israel’s destruction while enhancing cooperation with Hezbollah, Iran, Palestinian Islamic Jihad, and Syria. Meanwhile, there has been no breakthrough in efforts to secure the release of two Israeli civilians and the remains of two IDF personnel held by Hamas.

Judging from his past record as prime minister, Netanyahu supports the current Israeli policies in place in the West Bank and Gaza. There is no reason to believe that Netanyahu would have chosen a different course of action than the one recommended and implemented by the defense establishment (the IDF, Shin Bet, and Israel Police) over the past two years.

Had he presided over a balanced centrist government, Netanyahu could well have chosen to maintain the status quo in the coming six months: Fighting terrorism in the West Bank, working to avoid the economic collapse of the PA—but not considerably strengthening it politically—and sustaining the status quo in Gaza, which has seen Israel grant de facto recognition of Hamas’s rule there. Yet Netanyahu will face challenges from some of his new coalition members if he does this.

In an era in which the world is experiencing an energy crisis and heightened superpower tensions, the challenges of preserving Israel’s global standing and freedom of maneuver will be another issue knocking on Netanyahu’s door. It is a challenge that will be exacerbated by the fact that Israel’s policies toward Palestine will be the first significant discussion between Netanyahu and the Biden administration.

The divisions and historical baggage between the Democrats and Netanyahu are well documented and go back to the Obama administration. While Netanyahu and Joe Biden appear to have a good personal relationship, the Democratic Party’s internal dynamics oblige Biden, a supporter of Israel, to strike a certain balance on the Palestinian issue.

Israel, for its part, has a vested interest in safeguarding the critical strategic military and political alliance with the United States and working with Washington to deal with Iran’s nuclear ambitions, as well as its military-terrorist activities throughout the Middle East. It is not possible to truly disconnect Israel’s ability to work with the United States against Iran from the Palestinian issue.

These factors can help Netanyahu explain the need to prevent maneuvers by his new government that would isolate Israel and harm its supreme strategic interests.

Major General Eitan Dangot is a publishing Expert at The MirYam Institute. He concluded his extensive career as the Coordinator of Government Activities in the Territories (C.O.G.A.T.) in 2014.