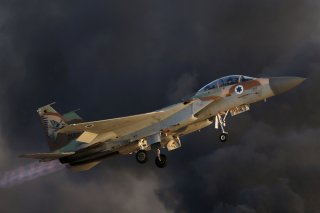 The Syrian military announced in a statement on Sunday that two of its soldiers had been killed during an Israeli airstrike on an air base near Syria’s southern city of Homs—marking Israel’s latest intervention to degrade the influence of Iran, Israel’s foremost regional adversary and a close ally of Syrian dictator Bashar al-Assad.

The statement, released by Syria’s state-run SANA news agency, indicated that Israeli warplanes had launched missiles at the base while flying over neighboring Lebanon. The statement claimed that Syria’s air defenses had successfully shot down some of the numerous missiles fired by Israel, although it did not provide further detail.

The Syrian Observatory for Human Rights, a London-based NGO tracking the Syrian conflict, also indicated on Sunday that four Israeli missiles had struck the Shayrat air base near Homs, suggesting that they had been aimed at an Iran-backed militia on the base rather than the Syrian armed forces.

The airstrike in Homs is the second strike to target Syria in less than a week. On Tuesday, another airstrike targeted a group of Iran-backed militiamen in eastern Syria, killing at least two Iranian citizens. Responsibility for the attack has not been confirmed, and Syrian officials variously blamed Israel and the United States, although the United States formally denied its involvement.

The Israel Defense Forces (IDF) did not comment on the incident, and it rarely discusses the details of its operations inside Syria. Tel Aviv has publicly admitted on previous occasions, however, that it has conducted hundreds of strikes targeting Iranian and Iran-linked forces inside Syria. Notable strike targets include the Quds Force, the shadowy external operations division of Iran’s Islamic Revolutionary Guard Corps (IRGC), as well as Hezbollah, the Lebanese militia-turned-political party closely tied to Iran’s foreign policy. While Hezbollah’s leaders have claimed a strength of 100,000 fighters and the group is known to have stockpiled tens of thousands of missiles for use in a future war against Israel, it has also participated extensively in the Syrian Civil War, supporting Assad during the country’s decade-long popular uprising and the emergence of the Islamic State (ISIS) terror group.

An earlier strike in mid-September targeted the Damascus International Airport, killing five Syrian soldiers. Israel was widely assumed to be responsible, but it did not comment.