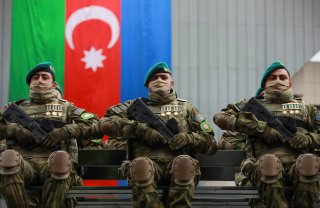 Turkish president Recep Tayyip Erdoğan joined his Azerbaijani counterpart Ilham Aliyev on  a podium in Baku on Dec. 10 to watch a parade celebrating “Victory in the Patriotic War.” The procession marked Aliyev’s latest celebration as he cements his legacy as the man who returned territories Azerbaijan lost to Armenia in the 1988–1994 Nagorno-Karabakh War.

Aliyev is a short-term thinker. He does not yet understand the tremendous price of his victory: Azerbaijan’s sovereignty. Russia and Turkey have stationed forces inside Azerbaijani territory. Turkey also reportedly controls several thousand mercenaries transported into Azerbaijan from Syria, Libya, and other Arab countries. None of these forces are under Aliyev’s control and both Moscow and Ankara can easily leverage them against Aliyev and his family should he stray too far from Erdoğan or Russian president Vladimir Putin’s dictates.

Aliyev may focus on Nagorno-Karabakh but for Putin, the game is much bigger and extends across the Caucasus, if not beyond. It involves not territory, but rather than nature of government. Alas, in the latest Caucasus war, Putin won again as he signals to the region that Russian authoritarianism offers security while liberal democracy brings only chaos and territorial loss.

Neither the Trump administration nor the Obama administration before it particularly cared about the Caucasus. Their strategic neglect was unfortunate, not only because of the region’s strategic value but also because of its cultural weight. In 301 AD, the Kingdom of Armenia declared Christianity to be its official religion and so became the oldest Christian country on earth. More importantly, the peoples of the South Caucasus have both early and repeatedly embraced democracy, a cultural attitude that Putin resents. Iranian democrats operating largely from Tabriz, the capital of Iranian Azerbaijan, modeled their 1905 Constitutional Revolution after the successful Russian effort to subordinate the Tsar to a legislative body earlier that year. In subsequent years, Armenia, Azerbaijan, and Georgia each achieved independence against the backdrop of the Russian Empire’s dissolution, before subsequently losing it to Soviet aggression.

Each of the three independent countries in the Caucasus have now had experiences with popular revolution and democracy. When Azerbaijan seceded from the Soviet Union, Ayaz Mutallibov, the first secretary of the regional communist party, simply took over as president but he was ousted following a series of disastrous military and economic events. On June 7, 1992, Azeris went to the polls in their first democratic election. Abulfaz Elchibey won 60 percent of the vote in a field of five, and formerly assumed power nine days later as Azerbaijan’s first non-communist leader. Elchibey sought to pivot Azerbaijan’s foreign policy away from Russia, but his efforts at setting Azerbaijan down a democratic path floundered in the face of both Russian opposition and a disastrous military campaign in Nagorno-Karabakh. Elchibey fell within a year, fleeing into exile as former KGB operative and communist functionary Heydar Aliyev assumed power, consolidating a dictatorship and eventually handing power over to his son and current leader.

Georgia, too, followed a similar path. Former dissident Zviad Gamsakhurdia led protests and demonstrations which, against the backdrop of the Soviet Union’s collapse, culminated in the restoration of Georgian independence. Gamsakhurdia did not last long, however. Opposition grew to his dictatorial tendencies. He sought to repress South Ossetian nationalism which he accused the Kremlin of encouraging. Ultimately, a Russian-backed coup unseated Gamsakhurdia after less than a year in office, and he died under mysterious circumstances in exile less than two years later. Former Soviet foreign minister Eduard Shevardnadze became president. He understood the need to balance relations between Russia and the United States, although he encouraged NATO’s eastward expansion and sought to orient Georgia more in the Western camp. Ultimately, in 2003, after parliamentary elections which international observers deemed fraudulent, protestors in the so-called “Rose Revolution” forced Shevardnadze’s resignation. Mikheil Saakashvili, a leader of the revolution, dominated subsequent polls winning 96 percent in an election with more than 82 percent turnout. Saakashvili interpreted his landslide as a mandate to more firmly tie Georgia to the West. Putin despised Saakashvili and, in 2008, intervened directly in support of both Abkazian and South Ossetian secession efforts. The Russian occupation kneecapped Saakashvili’s ambitions and his popularity plummeted. In 2013, after losing a parliamentary election, Saakashvili fled Georgia and subsequently moved to Ukraine where he renounced his Georgian citizenship in order to avoid extradition on corruption and abuse-of-power charges. In the post-Saakashvili-era, Georgia returned to a more balanced foreign policy deferential to Kremlin sensitivities and red lines.

Armenia, perhaps culturally the closest country in the Caucasus to Russia, has followed the same pattern. Former journalist turned politician Nikol Pashinyan shot to power against the backdrop in 2018 of mass protests against attempts by Serzh Sargsyan, Armenia’s long-time leader, to extend his term. Pashinyan sought greater foreign policy neutrality. While he did nothing either to challenge Russia’s influence in Armenia or the presence of the Russian base in Gyumri, both his willingness to cultivate the West and his rise in a people power revolution were deeply offensive to Putin for whom such uprisings are a nightmare scenario.

Armenians may be disappointed that Russia did little to protect them against the Azerbaijani and Turkish onslaught in the most recent Nagorno-Karabakh War but, in hindsight, protecting Armenia—and especially the self-declared Artsakh Republic in Nagorno-Karabakh—was secondary to reinforcing a lesson the Kremlin had previously applied to Azerbaijan and Georgia: Democratic revolutions may bring short-term political freedom, but they also lead to territorial loss and an erosion of sovereignty.

In contrast, Putin has shown that dictatorships and counter-revolutionary regimes succeed where their democratic predecessors fail. Elchibey in Azerbaijan, Saakashvili in Georgia, and now Pashinyan in Armenia all assumed office amidst popular acclaim. All presided over significant territorial loss—Elchibey to Armenia, Saakashvili to Russian-backed forced, and Pashinyan to Azerbaijan. Both Elchibey and Saakashvili ended their political careers in exile and disgrace and, if opposition parties in Armenia have their way, Pashinyan may not be far behind.

Such Russian success need not have been foreordained. The United States essentially forfeited its influence long before the first shots were fired in the most recent conflict, and neither the White House nor the State Department has done anything to regain leverage. Too often it seems that U.S. officials fail to see the forest through the trees and recognize the long game that Putin is playing.