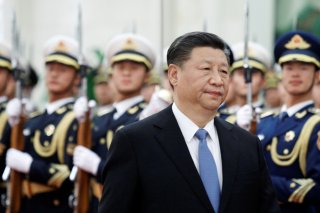 Why does China seem to be on the warpath? In the first half of the 2020, Chinese soldiers killed dozens of Indian troops over disputed borders, sank a Vietnamese fishing vessel, and launched a record number of incursions into Taiwanese airspace. Beyond military coercion, China’s belligerence included selling arms to Serbia despite concerns expressed by NATO about military dependence, pressuring the WHO to censor anti-China content, and sentencing a Canadian national to death.  and placing crushing tariffs on Australia for criticizing Beijing’s handling of the coronavirus.

The prevailing wisdom is that Beijing is more aggressive now because it is ascendant and the United States is distracted and declining. This “Chinese ascendancy school” argues that President Xi Jinping has successfully consolidated domestic power and built China’s military and economic might to enable his vision of an aggressive, revisionist foreign policy.

But this account is overly-simplistic: Chinese aggression is not merely a result of China’s strength, but also of its weakness. Xi Jinping’s overwhelming concern with domestic stability, the Chinese Communist Party’s (CCP) legitimacy and party unity are crucial drivers of China’s bellicosity. China has faced two disasters in 2020—the coronavirus and historic floods—which exposed its fragilities and created internal unrest. Its response to both was the same: escalating aggression against its neighbors. China’s economic and military power made these provocations possible, but its need to suppress internal divisions made them necessary.

The question is not why China has disputes with neighbors, but why now. If China’s aggression were only a result of its economic and military strength, then it could have paused its aggressive foreign policy as the political leadership back in Beijing refocused on dealing with the destructive wages of the coronavirus. Typically, governments in chaos have little time for adventurism abroad and must focus on remedies at home. In fact, many experts predicted that China would face inward during 2020, to focus on restarting economic growth and preventing new coronavirus cases.

Yet for the CCP, external aggression is a necessary tool to combat internal weakness. The CCP is obsessed with its fragilities, such as the threat of losing popular support and legitimacy and demands for more justice and freedoms. When Chinese people criticize their government, China must act more aggressively abroad. Beijing uses external aggression to fan Chinese nationalism and cast the CCP as the protector of the people and champion of a new era of Chinese glory.

Coronavirus was a true moment of weakness for the CCP, as it exposed fissures in China’s overcentralized authoritarian political system to light. A now-infamous example of Chinese paranoia over potentially out-of-control domestic crises was the case of Dr. Li Wenliang.  On February 7, Li,  a doctor who warned of the coronavirus but was quickly censored by the Wuhan police, died from the virus himself. Li’s death quickly became the top trending topic on Chinese social media with hashtags such as “We want freedom of speech.” The CCP censored all mentions of Li or any coronavirus failings, fearing more organized protests. Simultaneously, the coronavirus battered China’s economic growth, which underpins the CCP’s claim to legitimacy, with an unprecedented 6.8 percent Q1 contraction.

Far from the unified front which Beijing seeks to project, the coronavirus revealed the CCP’s dysfunction.  For example, Dali, a midsize city, intercepted and distributed a shipment of surgical masks headed to the hard-hit municipality of Chongqing. Similarly, the City of Qingdao instructed customs officials to hold on to a shipment of masks and medical products headed to Shenyang. At the same time, Hong Kong dealt the CCP a major political embarrassment when it halted traffic coming in from the mainland. These reports demonstrate the government’s inability to enforce basic order among competing cities and provinces.

In response to the tumult caused by the coronavirus crisis, the CCP mobilized popular support by reigniting conflicts with its neighbors. On April 2, during the peak of the coronavirus, a Chinese maritime security vessel sank a Vietnamese fishing boat near the Parcel islands. Just two weeks later on April 16, China escalated a month’s long standoff with Malaysia by deploying the coast guard to a disputed oil shelf. China also stepped up its military activities targeting Taiwan—who’s coronavirus response was strong and effective—with as many as three incursions in a single week in June. These episodes were widely condemned by the international community, but greeted with nationalist revelry at home.

The need to project strength and unity domestically explains the timing of China’s border dispute with India. In May, violent brawls broke out between Chinese and Indian soldiers near Sikkim. On June 15, the Indian government reported that twenty Indian soldiers were killed by Chinese soldiers in the Galwan River Valley, a disputed border region controlled by India but claimed by China.

The CCP has made full use of the crisis to rally nationalism. China’s foreign ministry issued statements blaming India for the clashes and state-propaganda popularized the slogan “China is not afraid.” The Global Times, a propaganda outlet, cast the clashes as an Indian invasion, saying “India has illegally constructed defense facilities across the border into Chinese territory in the Galwan Valley region.” Importantly, Chinese state-owned news outlets were also running news about India’s poor coronavirus response at the time, in contrast to its own “successes.”

The recent border clashes mirror China’s 2017 standoff with India at Doklam, a strategic point near Bhutan. During the conflict, Foreign Minister Wang Yi made statements that cast the conflict as an Indian attack upon China, and state media circulated images from the 1962 Sino-Indian War, to remind the China populace that Beijing had defeated Delhi before. The India clashes coincided with another threat to CCP legitimacy: a fight to remove pro-democracy advocates from the Hong Kong Legislative Council. China ended up harshly cracking down on the supposedly autonomous city as well.

Understanding China’s weaknesses is essential for policymakers attempting to make sense of its aggression.  This dynamic is not only a Xi Jinping phenomenon: China’s modern history shows that domestic crises are often followed by belligerence. A study that pre-dated Xi’s rule, with a dataset of over three thousand interactions between the United States and China, found that the CCP was twice as likely to initiate disputes when the Shanghai Stock Exchange (SSE) experienced a substantial drop. The SSE is a barometer of elite sentiment in China because the government pledges to protect elite investments and uses SSE listings to reward party insiders.

Insight into the CCP’s domestic political objectives helps determine the magnitude of the conflict and appropriate response. The editor of the Global Times wrote that a belligerent foreign policy was “necessary to satisfy the Chinese people.” Policymakers can use history to deduce what levels of aggression are “necessary” for the CCP’s goals. In India, it is unlikely that clashes will escalate into invasion because the current skirmishes satisfy the CCP’s purpose of bolstering legitimacy.

However, Taiwan may be in particular danger from China’s reactionary aggression. This is because the ways in which conflict with Taiwan would bolster the CCP’s legitimacy align more closely with more violent coercion—reunification is a core element of the CCP’s platform and Taiwan’s clear success fighting the coronavirus is a major blow to Beijing’s legitimacy. Because Taiwan’s “threat” to the CCP stems from its mere existence, it is particularly vulnerable to reactionary aggression.  Xi is a self-proclaimed follower of Mao.  So, the 1958 Taiwan Strait Crisis is a powerful example; Mao needed to generate support for the great leap forward and deflect criticism from poor economic growth. To stir the nation, Mao seized islands controlled by Taiwan and threatened an invasion of the country until restrained by American nuclear brinksmanship.

Over the last three months, China has faced another crisis in the form of historic floods. The Yangtze river basin has been inundated, affecting sixty-three million Chinese and inflicting over twenty-five billion dollars in direct damages. Many Chinese have raised concerns that the government’s massive infrastructure projects have worsened the crisis by draining wetlands and promoting development in flood-prone areas. Poor transparency has stirred more backlash as the CCP has been accused of hiding the extent of damages and censoring criticism. One political commentator in Beijing even predicted that the “Chinese public will question Beijing from this year’s continuous natural and man-made disasters, and even question China’s governance model and its effectiveness.”

Instead of hoping that the crisis created by the current floods will give China’s neighbors breathing space, the United States should brace itself for the possibility of renewed aggression. The CCP must prove its worthiness to the tens of millions of displaced people across China, making it prone to lashing out. Taiwan may be an appealing target; it has been spared from flooding and has been visible in assisting neighboring countries like Japan with post-flood reconstruction. Already, China has begun live-fire sea-crossing drills near Taiwan.

Recognizing the nature of the problem is the first step to successfully confronting China’s threats. China’s aggression is enabled by its power but motivated by its fragility. The coronavirus crisis makes it clear that the CCP views external aggression as a key tool to shore up its domestic support and legitimacy. Instead of viewing China’s aggressions merely as a “natural” function of its supposedly inevitable ascendency, neighbors, policymakers should start examining China’s weaknesses for signs of looming threats.  The United States and its allies can both better prepare for onslaughts of aggression and devise better deterrent policies.