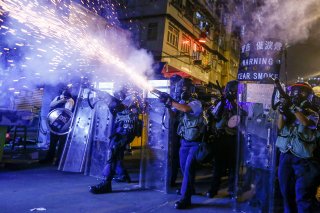 What Beijing is doing in Hong Kong is horrific and tragic. On June 30, it promulgated a new “national security” law that criminalizes secession, subversion, and terrorism—all presumably subject to Beijing’s arbitrary definition—and collaboration with foreigners in pursuit of any such activities. And the law applies to anyone anywhere in the world. Since then, Hong Kong authorities working on Beijing’s behalf—and with mainland officials deployed to Hong Kong—have arrested many dissidents, tightened surveillance and control mechanisms, and issued a “wanted list” of alleged Hong Kong subversive fugitives abroad. Meanwhile, Beijing has postponed for a year the Hong Kong legislative elections that were scheduled for September 6—ostensibly because of the threat from the coronavirus—after having disqualified several pro-democracy activists from running as candidates or for reelection.

Yet it would be both misleading and premature to declare this the end of a simple morality play. Hong Kong has not yet become “just another Chinese city,” as the prevailing narrative suggests. Even Beijing probably hopes to retain many of the things that make Hong Kong unique—especially as a financial center and trade entrepôt. The United States can still play a role in this regard, and might even be able to influence the revival of democratic reforms in Hong Kong. But this would require Washington to recognize and acknowledge the complex drivers that brought Hong Kong to its current state of affairs, and to avoid actions that would be counterproductive to the interests of the Hong Kong people.

What has come to pass in Hong Kong was not the inevitable outcome of a clash between a Chinese Communist Party (CCP) leadership that never intended to preserve “one country, two systems,” and a Hong Kong constituency that had been promised “democracy.” Instead, there were misplaced expectations and miscalculations on both sides. Beijing was not always wholly inflexible, while the democracy movement was not always willing or able to compromise when doing so was its only viable option. Scholar Richard Bush has expertly chronicled how the two sides fueled the hardening of each other’s positions, and why it didn’t have to end this way.

Beijing’s primary goal from the outset has simply been to maintain effective control over Hong Kong. Chinese leaders probably were prepared to “do no harm” to Hong Kong, and especially to the economic and diplomatic benefits to Beijing of stability and prosperity there, as long as there were no challenges to China’s sovereignty or to the legitimacy of CCP rule. This is hardly surprising, given the nature and history of the CCP regime.

What happened instead in Hong Kong flowed in many respects from two key elements of the “Basic Law” under which Hong Kong has ostensibly been governed since it transitioned from British to Chinese sovereignty in 1997. Article 45 of the Basic Law states:

It is important to note that no time frame was given for these processes, nor was any definition given of “universal suffrage” or “democratic procedures.” Needless to say, Beijing and democracy advocates in Hong Kong have over time made diverging assumptions on these issues, as well as on what constitutes “the actual situation in Hong Kong” and “gradual and orderly progress.”

The second key section of the Basic Law, Article 23, states:

The important thing to note here is that the HKSAR Government failed for more than twenty years to enact such national security legislation because of public opposition and protests organized by the pro-democracy movement.

The escalating crisis in Hong Kong that led to Beijing’s imposition of the new national security law was in many ways the culmination of a dynamic generated by the interaction between these two issues—“universal suffrage” and national security—over the past several years. The HKSAR government’s repeated failure to secure passage of national security legislation (under Article 23) reinforced the opposition’s confidence in its ability to also resist Beijing’s proposals (under Article 45) on how to select candidates for the chief executive position, which reflected a much more incremental approach to realizing “universal suffrage” than the democratic camp preferred.

In Bush’s telling, a crucial opportunity for compromise may have been lost during 2013–2015, when the HKSAR government tabled proposals (on Beijing’s behalf) that arguably would have allowed for the possibility—however narrow—of a chief executive candidate nominated by democracy advocates. Beijing may have calculated that its ability to exercise its influence over Hong Kong elites was worth taking such a risk. The democratic or “anti-establishment” camp, however, could not collectively agree to accept the proposal. Instead, its more ambitious elements chose instead to push for faster and more comprehensive steps toward fully democratic elections based on their interpretation of (and schedule for) universal suffrage. This produced the 2014 “Umbrella Movement”—characterized by increasingly large-scale and disruptive street protests—which ultimately succeeded in defeating Beijing’s election reform proposal in the Legislative Council.

But one side effect of this episode was the erosion of unity and leadership within the democratic movement, and especially the radicalization of elements of the movement that seized the opportunity to press what they saw as their momentum and advantage against Beijing. This was the backdrop for the HKSAR government’s renewed attempts to enact national security legislation, especially the 2019 extradition bill, which would have allowed for the extradition to the mainland of “fugitives” in Hong Kong. The proposed legislation sparked an even more intense and prolonged period of street protests, during which radical and some apparently leaderless activists reached unprecedented levels of illegal violence against the police, government facilities, and counter-demonstrators. Although the HKSAR government ultimately shelved the extradition bill, by then the protestors had issued an expanded list of apparently non-negotiable demands.

This appears to have been the last straw for Beijing, whose overriding priority—as noted earlier—is to ensure stability and its control in Hong Kong. CCP leaders had lost confidence in the HKSAR government’s ability to maintain that stability, prevent the return of violent demonstrations, and enact national security legislation on its own. So they brought the hammer down and, in typically draconian fashion, unilaterally imposed the law that took effect on June 30.

So where can we go from here? In deliberating how to address the situation going forward, Washington needs to reexamine its perceptions and assumptions about both the democratic movement in Hong Kong and Beijing’s intentions.

Notwithstanding the values the United States shares with democracy advocates in Hong Kong, it must be acknowledged that at least some of them had unrealistic goals and overplayed their hand. They were never going to be able to set the terms of their relationship with an authoritarian regime that holds most of the cards and has sovereignty over them. And because “universal suffrage” was not defined in the Basic Law, and no deadline was given for its establishment, Beijing was in a position to determine when “the actual situation” in Hong Kong and “gradual and orderly progress” were ready for it. From the CCP leadership’s perspective, last year's protests—and the potential for more this year—constituted an ultimatum, and an anarchic one, demanding that the regime grant elections based on the Democrats’ preferred interpretation of those phrases. Beijing, backed up with all the levers of power, rejected what it saw as an effort to move the goalposts. When two parties refuse to compromise, the one without leverage loses. This was only reinforced by the radical protesters’ resort to violence that was in clear violation of preexisting Hong Kong laws on peaceful protest activity—and against the advice of most of the Democrats’ foreign sympathizers.

In that regard, the Hong Kong protest movement also appears to have miscalculated what foreign sympathy and support could do for them. Unfortunately, such support was not going to be able to oblige Beijing to endorse the Democrats’ preferences for electoral reform or “universal suffrage,” or to overcome what CCP leaders would deem necessary to maintain political stability and social order in Hong Kong. The protestors were mistaken if they believed that Washington would be prepared and able to intervene in some way that would force Beijing to surrender to their demands or accept their version of what had been promised to them. Finally, they (and some observers in Washington) probably miscalculated the diplomatic and economic costs that Beijing would be willing to bear to maintain its control in and sovereignty over Hong Kong. (Hong Kong remains highly valuable to Beijing, but relatively less so than in 1997, given the development since then of other Chinese financial and trade centers. Moreover, CCP leaders know that the Hong Kong business community generally shares their concerns about political and social stability.)