China Is Touting Its Totalitarianism Taming of the Coronavirus Over U.S. Democratic Failure 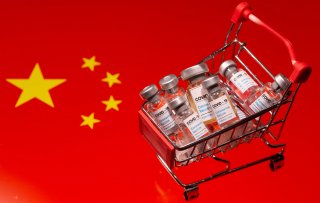 For months, President Donald Trump and his White House advisor Larry Kudlow continually touted that the United States was on a V-shaped economic recovery, suggesting a swift upward turn to pre-pandemic levels in the midst of his administration’s failure to manage the economy and the coronavirus pandemic. In June 2020, Trump said that “this is better than a V. This is a rocket ship. This is far better than a V.” In late September, Kudlow again argued that a V-shaped recovery does not depend on another round of federal financial relief. Yet, even as Congress passed the second stimulus package in late December, the Trump administration’s claims that the United States was on its way to a V-shaped recovery have thus far proven to be illusory. In fact, what is “really occurring” is a K-shaped recovery in the American economy.

Meanwhile, China has managed a “V-shaped recovery” from the coronavirus, which illustrates the enduring power of the Communist Party of China (CPC) and its ability to conquer a pandemic that brought worldwide activity to a virtual standstill. As evidence indicates that China has successfully managed the Wuhan-borne virus and its economy, the Economist magazine reported the gross domestic growth of 4.9 percent in the third quarter of 2020 and the International Monetary Fund projected China’s GDP growth to be 8.2 percent in 2021.

The American Midwest, in the meantime, is trapped in the throes of the coronavirus as Trump continues to claim that “it’s a hoax. There’s no pandemic.” His followers were encouraged to hold super-spreader events such as the ten-day Sturgis Motorcycle Rally in South Dakota. It became worse when his gullible acolytes began to self-medicate by drinking household cleaners after Trump inquired at a White House briefing in April whether “disinfectants could treat the coronavirus.” Others around the world attributed the coronavirus to “5G and microchip” conspiracies that “5G mobile phone signals either transmit the virus or reduce our defenses to it.”

In contrast to the meaningless rhetoric of the Trump administration, China’s “socialism with Chinese characteristics,” a model which adopted “the guidance of Marxism-Leninism” to Chinese conditions, has demonstrated the superiority of its system to bring into submission anything that may challenge its authority and infallibility regardless of whether it is natural, such as the coronavirus, or supernatural, such as its ability to convince the Vatican to formally renew its 2018 bilateral agreement over the appointment of Catholic bishops. The Vatican accord with Beijing came after the pope’s unprecedented refusal to meet with US Secretary of State Mike Pompeo, who had tried to stop the renewal.

Given the events of late, it begs the question: Has the CPC clearly demonstrated a superior and lasting form of governance over the evolving American model?

Much of China’s history throughout the nineteenth and early twentieth century was beset with turmoil. Too weak politically and too fragile economically, it was under constant threat of being carved up by its neighbors and Western powers. It was not until the latter part of the 1970s that Deng Xiaoping would successfully lead China to embark on the four modernizations: modern agriculture, modern industry, modern defense, and modern science and technology. Combining economic reforms with political reforms, China’s opening-up under Deng is the foundation of China’s explosive growth that averaged nearly ten percent over the course of three decades since its opening.

In recent years, however, President Xi Jinping appears to have taken the CPC on a hard right turn toward totalitarianism.

In 2017, China’s military was ordered to pledge “absolute loyalty” to Xi. The world’s largest armed forces under the Central Military Commission (CMC) is technically the armed force of the ruling Communist Party. Unlike the United States, China’s military serves the Party, not the state. Xi is also the chairman of the commission. The consolidation of such power as the president, the general secretary, and the chairman has not been seen in China since Chairman Mao Zedong. Like Mao, Xi also has his own political philosophy, “Xi Jinping Thought on Socialism with Chinese Characteristics for a New Era,” written into the CPC constitution.

In 2018, the National People’s Congress, which was largely considered a “rubber-stamping exercise,” allowed Xi to consolidate his power by removing the term limits and by granting him to remain “president for life.” Also in 2018, Xi again called on China’s military to demonstrate “absolute loyalty” to the ruling Communist Party, declaring that “we must . . . cast the ideological foundation of the [People’s Liberation Army, PLA] army’s absolute loyalty to the party.”

In 2020, the CPC demanded a show of “greater loyalty” from the growing private sector by citing the need to manage mounting “external risks” emanating from the open American hostility to the coronavirus pandemic. Xi then installed CPC officials inside corporate boardrooms to demand “executives tailor their businesses to achieve State goals.” In what was clearly a shot across the bow of China’s private sector, Xi personally intervened to cancel the initial public offering of Jack Ma’s Ant Group—a deal in which investors around the world had already committed to “paying more than $34 billion” for its shares.

Effective on January 1, 2021, the new National Defense Law removed the “war powers” policy and decisionmaking power from the State Council—i.e., China’s cabinet—to the CMC, headed by Xi, who now has the unparalleled authority to mobilize the PLA forces in defense of national interests at home and abroad. The new legislation, which comprised one hundred stipulations in fourteen chapters, empowers Xi to build a nationwide coordination mechanism by mobilizing state-owned and private enterprises to participate in applied research for defense technology in the conventional and nontraditional domains of electromagnetics, cybersecurity, and space exploration.

In his book, “The Party: The Secret World of China’s Communist Rulers, Richard McGregor wrote that “China retains many of the formal institutional trappings that give it a superficial resemblance to a pluralist system, with executive government, a parliament and courts.” However, the ubiquity of the party’s presence in the government means that in any deliberations, the party’s interests come first. According to McGregor, this includes “key think-tanks, the courts, the media, all approved religions, and universities and other educational institutions, and maintain direct influence over NGOs and some private companies.”

Quoting the then Peking University Law Prof. He Weifang, McGregor further confirmed that “as an organization, the Party sits outside, and above the law” adding that “the Party exists outside the legal system altogether.” In the Brookings Institution’s report on Party Leadership and Rule of Law in the Xi Jinping Era, Professor Jamie Horsley wrote that the CPC “has largely observed a technical, de jure separation between itself and the state, including the legal system;” in practice, however, the party controls every aspect of the state. This dualist system is hardly new, and while a number of countries such as the former Soviet Union come immediately to mind, one, in particular, would set the world ablaze.

In his opening statement at the Nuremberg Military Tribunal on Nov. 21, 1945, Justice Robert Jackson described “the consolidation of Nazi power” and the political structure of Nazi Germany as follows: “we find at this period two governments in Germany—the real and the ostensible. The forms of the German Republic were maintained for a time, and it was the outward and visible government. But the real authority in the State was outside and above the law and rested in the Leadership Corps of the Nazi Party.”

In her book, The Origins of Totalitarianism, Hannah Arendt wrote that a dualist political structure and authority between state and party “is one of ostensible and real authority, so that the government machine is usually pictured as the powerless façade which hides and protects the real power of the party.” Referring to the Third Reich, Arendt quoted the then Czechoslovak statesman and philosopher Thomas Masaryk, who opined that “even an expert would be driven mad if he tried to unravel the relationships between Party and State.”

Similarly, PLA fealty to Xi also has a precursor in Nazi Germany. After the death of President Paul von Hindenburg in 1934, a law amalgamating the offices of president and chancellor enabled Hitler to assume the title of “Leader and Chancellor of the Reich.” Hitler also became the “commander-in-chief of the Wehrmacht,” whose members were required to swear “an oath of allegiance to him personally and no longer to the Weimar Constitution.”

Xi’s notion that the army must swear an oath of loyalty to him personally no doubt also has some Maoist roots. Zedong is known today to have uttered the quip that “political power grows out of the barrel of a gun” but it is actually incomplete. In his book, The Search for Modern China, Professor Jonathan Spence wrote that what Mao had actually said was: “political power grows out of the barrel of the gun. Our principle is that the Party commands the gun, and the gun shall never be allowed to command the party.” No doubt, CPC cadres today would remember that at the time, there were tensions between the party and the army, and as the army was gaining new capabilities, it was not clear whether the party was going to control the army, or the army was going to control the party.