China's Xi Jinping Isn’t Adolf Hitler, But He Might Be Kaiser Wilhelm 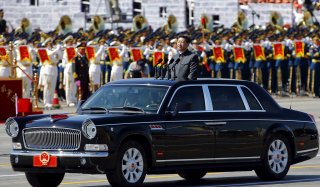 Historical analogies only ever go so far. No two periods or people are really that alike. But although history can’t tell us anything much about what might happen next, it will always serve as a reservoir of comparative inferences with which to say something about the present. Nevertheless, where once sophisticated strategic discourse would be peppered with references to Schleswig-Holstein, the Eastern Question, Kronstadt and the many distinct episodes in the long-running Peloponnesian War, now it always seems to come down to Hitler and what part we ought to have played in his downfall.

Inevitably, therefore, with the deterioration in China-US relations, Beijing has joined the Hitler identity parade as the gimlet eyes of Western scholarship accumulate the damning evidence. There is no question that post-engagement China presents an enormous, almost indigestible, strategic and ideological challenge to a hesitant and doubtful West, unsure any longer of its own hegemonic perquisites. And although China’s own behavior invites the comparison, I think a better analogy exists in the form of Wilhelmine Germany in the few decades before the Austrian Corporal set Germany’s course towards his own private Ragnarök.

The Wilhelmine comparison has been made before, but usually by those speaking of Thucydides’s trap and the conventional wisdom that the cause of the First World War lay in Germany disrupting the ‘balance of power’ which England had established after the Napoleonic and Revolutionary Wars. A closer look, however, shows many more valid similarities can be discovered besides those accompanying Germany’s and China’s twin roles as rising powers.

The German Empire was proclaimed in January 1871 in the Hall of Mirrors at Versailles following the swift defeat of Louis Napoleon’s Second French Empire in the Franco-Prussian War. The symbolism of reclaiming the Imperial throne from the nephew of Napoleon Bonaparte–who had in effect usurped it in 1804–could not have been starker. The new Empire marked the endpoint of a decades-long process of unification from many small principalities and finally asserted the primacy of German statehood within a Germany now free from centuries of foreign interference.

While German nationalism was a relatively new and vigorous political movement, the cultural space into which it expanded dated from the year 843 when the territories of Charlemagne were divided up between his three grandsons. This sense of historical restitution also contributed to an almost millenarian sense of national destiny, as if Germany could now take up its rightful place at the head of nations; culturally, technologically and economically dominant. A feeling which would lead inevitably to further resentment as other states did not simply make room for Germany’s newfound, and as far as they were concerned self-evident greatness.

In the case of China, reunification with Hong Kong in 1997 was of huge symbolic importance too. Having been divided and manipulated by ‘foreign powers’ for so long, China’s chief tormentor finally relinquished its sovereign claim to Hong Kong. The constant references in Chinese diplomacy to the ‘unequal treaties’ and the ‘century of humiliation’ make it very plain that the Chinese leadership believe they are recovering stolen greatness which is further reflected in their claims to be the inheritors of ‘5,000 years of history,’ despite only being a unified state for just over 2,000, and only periodically and piecemeal between now and then.

‘The empire long divided must unite,’ is the opening line in the Chinese classic story ‘The Romance of the Three Kingdoms’ and is a familiar sentiment to most Chinese people today. Looking at the actual history of China’s repeated conquest by Mongols, Manchurians and eventually Europeans reveals it as more romantic than reasonable, but there is no doubt that the unity of China has always carried a powerful political latency that portended a sense of greatness when achieved.

Newly reunified, both countries sought a more expansive role in the world. Germany wanted it’s ‘place in the sun’ in the form of new imperial conquests in Africa and Asia, but found its way largely blocked by the more longstanding powers and contested by a new rival in the United States. China, on the other hand, has asserted its sovereign claims locally, most notably in the South China Sea and in the Himalayas. Both, however, sought regional alliances that could extend their influence through commerce. China has formalized the Belt and Road Initiative as a principal conduit for the kind of infrastructure investment that comes with conditions, and has connected up railway lines all the way to Europe to facilitate trade. Germany flattered the troubled Ottoman empire and gained a concession to build the Berlin to Baghdad Railway, whose principal objective was really Basra and the Indian Ocean.

China’s Belt and Road initiative has always been fairly baggy, incorporating all kinds of different investments with a sometimes shaky economic rationale, but one key part has been the China Pakistan Economic Corridor, which cements an ‘all-weather friendship’ with Pakistan and secures an overland route to the Indian Ocean. Many projects beyond this remain of uncertain value and for many reasons the BRI itself captures more the scale of China’s ambition than a genuine strategic vision. It certainly meets China’s idea of a grand strategy befitting their renewed status as a great power in the world, though the reality doesn’t yet live up to the dream.

Germany’s imperial ambitions were most extensively expressed in their eventual war aims which according to Franz Fischer’s ‘Germany’s Aims in the First World War’ sought dominance of three spheres; Mitteleuropa, Mittelafrika and Mittelasien. Though Germany never made much progress with these aims, China is today deeply invested in all three of these areas, and clearly shares something of the Wilhelmine spatial imagination. The fact that China sees itself as the Middle Kingdom merely reinforces the spectral association of their shared strategic visions. Most importantly of all, however, both Wilhelmine Germany and modern China evince the shared idea that serious world powers need to impose themselves on the map.

The House that Wilhelm Pulled Down

The appeal of the Nazi Germany comparison is invariably the pejorative value it contains, with Hitler’s junta having a reputation blacker than their shirts. This has somehow obscured the antics of earlier powers. Napoleon, for example, is often spoken of with reverence, despite the hugely destructive wars of conquest that bear his name. Wilhelm the II is likewise often treated as a fairly normal 19th Century despot, perhaps a little more militaristic than his cousins in England and Russia but cut from the same cloth. Consequently, to compare a modern power to Wilhelmine Germany might seem almost like a compliment when compared to his Nazi successors.

This, however, is to entirely ignore the nature of the threat he posed to the existing order, and the magnitude of the conflict he engineered. While I argue, therefore, that modern China compares better with Wilhelmine than Nazi Germany, in no sense do I mean this as a compliment. Germany in the late 19th Century was a highly authoritarian administrative state that saw military power as an instrument of strategic advantage. A powerful strain of nationalism mutated into a narrative of being held down by foreign powers, kept from their rightful place at the head of nations, and they deliberately engineered an enormous war of conquest to secure continental dominance in Europe, Africa and ultimately Asia.

The comparison between China and Nazi Germany falls down primarily because China can’t yet justifiably carry the stain the Nazis truly earned, but it ought to be borne in mind that the Nazis were what came after the Wilhelmine order was swept away by the reality of Germany’s own strategic and industrial shortcomings. In that sense, the Nazis were merely the intensification of Wilhelmine failure and collapse, with added paranoia and savagery thrown in. If we are going to make historical comparisons, therefore, China’s sense of nursed grievance, historical destiny, rapid militarisation and the sheer scale of its strategic vision map very closely onto Wilhelmine Germany, where Nazi Germany is better left as a warning of what they might become, should their plans fail.

Douglas Bulloch holds a PhD from the London School of Economics and is an international relations scholar based in Hong Kong.