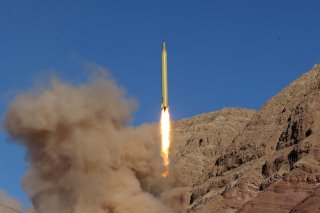 As Vladimir Putin invades Ukraine, it is worth recounting how shortsighted Western policymaking can at times pave the way for diplomatic and trade relations that are highly favorable to China and Russia and undermine global non-proliferation efforts.

We now have, for the first time, “unambiguous evidence” that China is helping Saudi Arabia build a ballistic missile program. And although Riyadh is known to have purchased ballistic missiles from China before, the latest development marks a turning point, since it will allow the kingdom to produce its own missiles. An indigenized ballistic missile program capable of reaching Iran will not radically boost the kingdom’s aerial defenses. Thanks to Western arms exports to Saudi Arabia, the country already possesses an immense edge over Iran in terms of aerial firepower. Even pro-Saudi hawks concur with this view.

It is still unclear how far the kingdom has progressed in developing its missile program. Indeed, it is not even clear if the Saudis were ever able to successfully launch the missiles they purchased from China in the past. What is clear, however, is that China is now laying the groundwork for a Saudi ballistic missile program that can potentially overpower Iran’s air defenses in the future, something it presently cannot reliably achieve. Should this ever come to pass, it is likely to alter the balance of deterrence between Iran and Saudi Arabia in the latter’s favor.

Iran’s vulnerabilities in the air were repeatedly exposed during its eight-year war with Iraq (1980-1988). As its urban centers and troops were pummeled mercilessly and with relative ease by Saddam Hussein’s Scud missiles and aerial bombardments, Iran had very few means to retaliate and deter the Iraqi dictator from continuing his onslaughts, which were often charged with chemical and biological agents.

In the war’s aftermath, the Iranians were determined never to repeat such despondency in the event of a future military showdown. Thus, they gravitated towards ballistic missiles, a cheaper and less advanced alternative to a modern air force to make up for their inferior airpower and air defenses.­­­­

Today, Iran possesses an advanced ballistic missiles program that it has shown itself ready to utilize in the event of a military conflagration. Indeed, Iran retaliated for the 2020 U.S. assassination of its top general by pounding American forces in Iraq with ballistic missiles. The unsettling specter of these powerful projectiles striking fear and terror in enemy combatants in the event of a military conflagration affords Iran a limited measure of deterrence against its adversaries. The more potent this specter, the more potent Iran’s deterrence. And precisely here lies the significance of a fully operational and indigenized Saudi missile program capable of overwhelming Iranian air defenses. Should such a program ever materialize, it will likely diminish Saudi fear of Iran’s missiles and alter Iran’s risk calculus should the two countries decide to lock horns militarily. Riyadh will proceed with the knowledge that Iran and its allies will be more reluctant to strike assets belonging to Saudi Arabia and its allies. It is hard to imagine these factors not dulling the blades of Iranian deterrence.

That Beijing would lend itself to a project that, upon completion, may strike at the heart of Iran’s military deterrence does not reflect Chinese hostility towards Iran. Nor does it reveal a deep-seated Chinese commitment to Saudi security. It does, however, indicate that Beijing’s calculus has given more weight to its financial interests than Tehran’s strategic concerns, despite the latter’s reliance on the former for skirting U.S. sanctions after Donald Trump’s withdrawal from the 2015 nuclear deal and a twenty-five-year strategic partnership between the two countries.

It is not only Beijing that can afford to overlook Tehran’s strategic needs and concerns.

Consider Russia’s readiness to export its state-of-the-art S-400 anti-aircraft missile system to U.S. allies Saudi Arabia and Turkey. Significantly, the latter also happens to be a NATO member, which does not appear to have been a deal-breaker for Russia. Contrast this readiness—nay willingness—with Moscow’s long delay in transferring the less advanced S-300 system to Iran, supposedly Russia’s military ally in Syria and Iraq against ISIS. The first reports of Russia’s agreement to supply Iran with the S-300 system emerged in 2006. But following U.S. and Israeli pressure, the Russians simply suspended the deal to comply with a stricter 2010 United Nations arms embargo. It was not until the finalization of the 2015 nuclear deal, the Joint Comprehensive Plan of Action, between Iran and world powers that the Russians lifted the self-imposed ban on selling the S-300 to Iran. It was finally delivered to Iran in 2016, more than ten years after initial reports of the deal first surfaced.

Iran’s participation in such unfavorable arrangements is not a matter of preference but driven largely by compulsion. It is owing to Western—particularly U.S.—sanctions and arms embargoes that the Iranians continue to enter into arrangements that, although not always favorable to them, are highly favorable to countries like Russia and China. The Iranians had hoped that the 2015 nuclear accord would allow them to break free from such arrangements. Their hopes were shattered when Trump withdrew from the 2015 nuclear agreement and imposed ravaging economic sanctions on Iran, despite the country’s full compliance with the agreement. Europe’s subsequent failure, despite its promises, to serve as a bulwark against those sanctions and President Joe Biden’s failure thus far to fulfill his promise of reviving the deal have further dampened Iran’s hopes of diversifying its foreign policy portfolio, which is a boon to countries like China and Russia, supposed adversaries of the West. It is an open question whether the Raisi administration would today be trumpeting its questionable “Look to the East” rhetoric were it not for U.S. failure to uphold its end of the 2015 nuclear deal and European failure to mitigate the impact of U.S. sanctions on the Iranian economy. None of this is to deny Iran’s agency in facilitating its isolation. Events such as the 1979 seizure of the U.S. Embassy in Tehran and holding U.S. diplomats hostage did not exactly strengthen the position of those in the West in favor of a more balanced approach to arms exports.

But China’s role in building an entire ballistic missile program for Saudi Arabia is a reminder that in the long run, the West’s uneven and shortsighted security arrangements do not just undermine Iran’s defense posture. They also undermine non-proliferation efforts, while fueling arms deals highly favorable to countries like China and Russia.

Sajjad Safaei is a Postdoctoral Researcher at Germany's Max Planck Institute for Social Anthropology. Follow him on Twitter @SajjadSafaei0