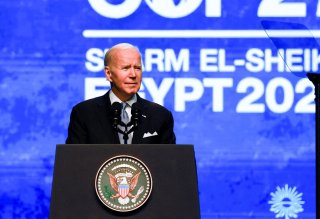 Just before he left for the United Nations COP27 climate conference in Egypt, President Joe Biden tweeted: “The global leaders of the COP27 must reach out and take the future in our hands to make the world we wish to see and that we know we need.” This reminded me of one of my favorite spy movies, Our Man Flint. In the movie, the enemy is not a rival power like the Soviets or Red China or an evil criminal organization like Specter or THRUSH. It is an idealistic group of scientists who can control the weather. Derek Flint is sent to eliminate this threat. When confronted, the scientists explain they intend to coerce the nations of the world to disarm and pursue peaceful endeavors under their benevolent direction. They invite Flint to join them, with their leader declaring that “ours would be a perfect world!” Flint refuses, “because it’s your idea of perfection, gentlemen—not mine!”

It is because there is no universally shared vision of the world that Biden’s words fell on deaf ears. COP27 failed, as have the previous twenty-six conferences to place imagined climate control above tangible national interests.

Emerging nations pushed back against continually citing the goal of preventing global warming from rising 1.5 degrees Celsius, or 2.7 degrees Fahrenheit, above pre-industrial levels. “1.5 is a substantive issue,” Wael Aboulmagd, a senior Egyptian negotiator, said, adding that China was not the only country that had raised questions about the target. This pushback challenged the very foundation of the UN climate effort, which claims “that only a fraction of proven fossil fuel reserves can be burned if we are to keep temperature rise to 1.5°C.” Most of the world finds this goal unacceptable. A compromise adopted in 2015 raised the formal target to 2 degrees Celsius while keeping 1.5 degrees Celsius as the ideal. Many governments want this reference to an ideal of 1.5 degrees Celsius ended.

The target for net zero—the cutting of greenhouse gas emissions to as close to zero as possible, with any continued emissions being reabsorbed by carbon “offsets”—is now 2050. However, each country is to pursue this goal in its own way. For instance, India says it will not reach net zero until 2070. Policy goals set generations into the future lack credibility.

If the UN’s statement that “fossil fuels, such as coal, oil and gas, are by far the largest contributor to global climate change” is true, then replacing fossil fuels with renewable energy should be the top priority. But it wasn’t made COP27’s top priority, for the obvious reason that it is impossible to accomplish this at a bearable cost. And the green activist demand that fossil fuels simply be eliminated regardless of what replacements are available would impose a dramatic drop in the standard of living of billions of people. Indeed, Europeans will discover the discomfort of an energy shortage this winter. National leaders know this is not an approach their people will tolerate.

Last year, the U.S. Energy Information Administration (EIA) projected that while renewable energy sources will grow rapidly, they will be used primarily to increase total global energy output, not to replace existing sources. “By 2050, global energy use in the Reference case increases nearly 50% compared with 2020—mostly a result of non-OECD economic growth and population, particularly in Asia. In the Reference case, global emissions rise throughout the projection period, although slowed by regional policies, renewable growth, and increasing energy efficiency.” This means the hope that emissions would peak in 2025 (or 2030) has been dashed.

The driving ambition of the developing world is to develop, which means generating more energy by all available means, including oil, the use of which is expected to continue to grow through 2050. In October of this year, the EIA issued a new projection for nuclear power, a relatively clean energy source the greens are loath to talk about. The agency predicted a doubling of nuclear power generation worldwide by 2050, with the rethinking of security concerns in the wake of the Russo-Ukrainian War being one of the drivers.

Coal, which generates one-third of the world’s electricity, has been the main target for cuts. At COP26, 200 countries signed a pledge to “phase down” (but not eliminate) coal use. Yet a global record for the use of coal was set last year. New coal-fired power plants are under construction around the world because they meet the practical requirements of being reliable, affordable, and secure. Half of the world’s new coal plants are being built in China, even though Beijing’s fourteenth five-year plan claims coal will be “demoted” as a power source in coming decades. China claims that by 2025, 20 percent of its energy will come from renewables. Beijing is rapidly expanding its use of solar power and electric vehicles, but the driving force seems to be security rather than fear of climate change, which it has never taken seriously. As tensions rise in the Indo-Pacific, China is well aware of its vulnerability to sanctions or a blockade of oil and gas imports during a conflict. Coal also provides a security blanket, as China has the world’s fourth-largest proven coal reserves. But other Asian countries, notably India, Indonesia, and South Korea, are still building substantial coal plants as well.

Attempts at COP27 and previous UN meetings to add other fossil fuels to the coal “phase down” failed. Indeed, for the first time, oil and gas companies were invited to participate in the conference. In his speech at COP27, Biden never uttered the words “fossil fuels,” “coal,” or “oil,” though he calls for ending their use when addressing American audiences. Biden knew his international audience, so he repeatedly used the term “diversified energy” in recognition that countries will continue to make policy choices based on practical matters of reliability, affordability, and security, not fear of climate change, and will thus continue to use coal and oil along with natural gas, nuclear, solar, and wind.

The discussion has evolved from stopping climate change to adapting to it. Adaptation—targeting specific incidents of climate-related distress, if and when they appear—is a much more practical approach than trying to radically transform entire societies in ways contrary to popular desires. Since 2016, there has been a push to incorporate climate “resilience” into the estimated $90 trillion in infrastructure investments needed worldwide, particularly in developing countries, over the next fifteen years. As the UN puts it, “if all of this sounds expensive, it is—but the important thing to remember is that we already know a lot about how to adapt. More is being learned every day.” The argument for including climate as a design element in infrastructure projects is based on the same logic as any investment and will be evaluated on its merits. A call for climate features to be required in major projects was rejected at COP.

The 2015 Paris Agreement, signed at COP21, called for $100 billion a year to be raised to aid developing countries, half of which would be used for adaptation. These funds have not materialized, so the attempt to double this commitment lacks credibility, as does the call for another $300 billion to be raised annually for adaptation. Yet the real battle at COP27 was over how to get more money flowing from developed economies to developing economies to cover “loss and damage” from fires, floods, and other natural disasters allegedly spawned by climate change. The logic is that if human action is aggravating climate change, those countries that have been most active in building the modern world are liable for any damage suffered by the rest. This is just the old principle of “common but differentiated responsibilities,” which means all burdens, restrictions, and costs are to fall on the developed countries, while the rest remain free in their “right to develop.”

The original offer from the European Union to provide some aid to “the most vulnerable” countries set off a clamor for everybody to be able to make claims. The United States had opposed such a fund precisely for this reason, but it shifted in favor of it as the issue took the conference into overtime on November 19. However, it was not determined who would provide the money, who would administer it, and which countries and kinds of damage would be eligible. Instead, these questions would be topics for COP28. Still, this empty gesture was hailed as the greatest accomplishment of COP27, perhaps the greatest since the Paris Agreement! No wonder the meeting was quickly called a failure for advancing “climate ambitions,” with national ambitions holding sway instead.

If a room full of government climate specialists did not act as if a crisis was looming, higher authorities back home, whose plates are filled with pressing problems, will not divert scarce resources to address tired rumors of threats lurking beyond the horizon. Human nature was on display at COP27.