The Coronavirus Comeback Plan: How Italy Will Rise Again 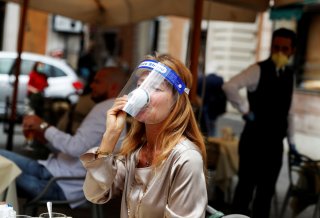 Italy has suffered worse than any other European country from the effects of the coronavirus pandemic. The health and economic catastrophe was only made worse by a weak response from European Union institutions. This created an opportunity that invited a massive Chinese campaign to over-promote its assistance to undermine trust in the EU. The results, as expected, created a favorable view of the Italian public towards Beijing.

A year later, many things seem to have changed. One of the main consequences of the paralyzing pandemic was a political crisis that led to the creation of a new government led by Mario Draghi, a world-renowned economist, and supported by more than 60 percent of Italians. If the massive Recovery Plan is well implemented, then this could be a turn-around moment for Italy, but also a Litmus test for the future of the EU.

It’s All about the Economy

Last year, the Italian economy contracted twice as much as most other Eurozone countries at almost 11 percent, delivering Italy the deepest recession in its history. The spillover effects have had devastating consequences for Italy’s overall economy and as expected caused chaos across its political spectrum. Almost 55 percent of the Italians think that the economic crisis is the biggest threat for the country, compared to 22 percent who see the pandemic as the biggest threat.

In 2020, the income per capita in purchasing power parity in Italy was $37,900 compared to $43,000 in twenty years ago. It simply means that the living standards of Italians are lower now than twenty years ago. It would be a mistake to claim Italy’s woes are simply the result of the pandemic. What we see today is the long-term impact of several previous challenges that were poorly addressed. Italy has suffered three recessions in less than a decade and a half (2008–2009, 2012–2013, and 2020–2021). The current crisis is bringing to light the deep-rooted structural problems of the Italian economy.

Italy was the first country in Europe to receive Chinese aid in the form of masks, ventilators, and specialized medical personnel. This assistance was over-magnified in a public diplomacy and social media campaign, focused on celebrating the “special relationship” between China and Italy, as a member of the Belt and Road Initiative. A combination of tools was cleverly used for this purpose, including the “manipulation” of economic cooperation to dominate the narrative, and the instrumentalization of the Chinese diaspora. Throughout the diplomatic and social media campaign, China was portrayed as a friend and savior, while using messages to create animosity toward Italy’s traditional western allies.

Opinion polls on how China is perceived show mixed results. At the initial phases, a favorable view of the Italian public opinion was noticed, seeing Beijing as the main actor in the fight against the virus alongside Italy, with 52 percent seeing it as a “friend.” It was an impressive increase in public support compared to a year earlier, when the United States held the spot as the privileged partner. About 58 percent of the Italians viewed China as an actor with increased influence in the world.

Fast forward, at the end of 2020 things seem to have changed. More than half of the Italians considered Chinese aid during the pandemic interested in creating political influence in the country, while 62 percent of Italians have a negative opinion and only 38 percent a positive one. On the other side, 75 percent of the public has lost faith in President Xi Jinping, compared to 54 percent in 2019.

The former Italian government (Five Star Movement and the far-right League) created as a result of the political elections of March 2018, welcomed China as a third actor, between the EU and the United States. The positive views on China, coming mainly from the Five Star Movement, was formalized when the Italian government signed a comprehensive memorandum of understanding with China in March 2019, becoming an official member of Beijing’s Belt and Road Initiative. Bilateral relations had never been closer.

The narrative was mainly focused on the importance of the Chinese market for “Made in Italy” exports. This resonated with the public, 57 percent of which considered China as the world’s top economy. Indeed, bilateral trade relations between Italy and China have increased in the last two decades, but very slowly. Italian exports to China increased less than 12 percent in one decade, from $11 billion in 2010 to $14.5 billion in 2019. Moreover, Italian exports to China have seen a decrease since 2018. The trade deficit with China is growing, reaching $21 billion in 2019, as Chinese imports to Italy amounted more than $35 billion. Italian exports in China make up only 2.7 percent, compared to European partners such as Germany (12 percent) and France (10 percent), or the United States with 10 percent of the total exports.

Chinese investment in Italy increased in the aftermath of the 2008–2009 financial crisis, when Chinese acquisitions targeted big companies and small and medium enterprises, in search for technologies, innovation, and brands. Italy became the second most attractive economy, after Germany, attracting Chinese investment for a stock of almost EUR 16 billion ($19 billion).

Beijing is also highly interested in the Italian financial and insurance sector. During Xi Jinping’s visit to Italy in March 2019, UniCredit-SACE Group and Exim-Import Bank of China signed several memorandums of understanding, such as the concession to Cassa Depositi e Prestiti (CDP), Italy’s State lender whose investment vehicle CDP Reti is owned 35 percent by the Chinese State Grid Europe, to launch the “Panda” bond program together with the People’s Bank of China, intended for institutional branches investing in China and for Italian companies operating in the corporate finance and infrastructure sectors.

Since 2019, Italy has signed a long list of agreements with Beijing to create partnerships in infrastructure, industry, media, education and the financial sector. Beijing has been trying for months to become an important player in the Italian infrastructure development for the Belt and Road Initiative Maritime Silk Road, eying the vulnerable hubs of Trieste and Genoa, whose development, envisaged for the Trans-European Connectivity Plan. Other projects of the memorandum of understanding signed in 2019 included railways and airports, but also space and telecommunications, to complete the picture. Last September, the Italian government froze some ongoing deals with Chinese big enterprises in infrastructure and space, such as the participation of the China Communications Construction Company in the renovation and connectivity plan of the Port of Trieste, as the German company HHLA became the main stakeholder. Similarly in space cooperation, Italy left the Chinese space program (the Celestial Palace), by canceling the supply of a high-tech pressurized model of the Tiangong-3.

Since 2018, as a result of increased scrutiny following the adoption of EU screening mechanisms, there has been a decline of Chinese FDI in Italy. But recently, Faw, the largest Chinese car manufacturer announced an investment of more than 1 billion euros for an electric car design center in Emilia Romagna.

It seems that China’s misinformation campaign in Italy during the coronavirus outbreak smashed the Italian government’s enthusiasm toward Beijing. Also, as a result, its efforts raised the level of criticism in the media on the Chinese tools to gain influence. On the diplomatic front, the fiftieth anniversary of the opening of diplomatic relations with the People's Republic, which took place in November 2020, was subdued in the media.

Concerns about human-right violations from Beijing, especially concerning Hong Kong, have become more openly criticized in the media, raising awareness of the Italian public. Also in a dramatic change of the government language, the new prime minister of Italy, Prime Minister Draghi, addressed these issues in his inauguration speech raising awareness about human rights, carefully observing “what is happening around China,” but also reaffirming the Italian adherence to the pillars of the international relations, in line with the historical anchors of Italy: the European Union, the Atlantic Alliance, and the United Nations.

While the main focus of the new Italian government will be to manage the pandemic and restore the economy, formulating strategies that redesign Italy’s role in the complex geopolitical chessboard is a recognized imperative. Strengthening European and Transatlantic alliances is very high on the priority list of Draghi. Front and center is reaffirming Italy’s historical partnership anchors: the European Union, the Transatlantic Alliance, and the United Nations.

The National Recovery and Resilience Plan will allow Italy to use more than 209 billion euros of the EU’s Recovery Plan, focused on a low-carbon and sustainable economic model in line with the European Green Deal Investment Plan. If it is well implemented, then it will be a lever to modernize the country, but it is also a Litmus test for the stability of the common currency and the European project. “The pandemic has revealed the need to pursue a more intense exchange with the partners with whom our economy is more integrated” commented Draghi. He has brought into the political conversation concerns about the Chinese expansion strategy in Europe, but also in Africa, with investment in the new maritime and land routes of the Belt and Road Initiative.