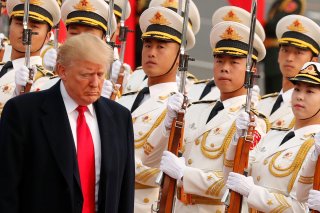 The day after Juneteenth, President Donald Trump and his campaign staff launched a “masks optional” campaign rally in the traditionally conservative state of Oklahoma. Hours ahead of the Oklahoma rally in Tulsa on June 20, the communications director divulged that six campaign staffers working on the rally tested positive for the coronavirus. Drawing large crowds (though smaller than expected) and ignoring social-distancing precautions, the rally put at least one hundred thousand American lives at risk and insulted the Black community that has been protesting police brutality under the banner of Black Lives Matter (BLM) across the country consistently for over twenty days.

The location and timing of this rally made Trump’s string of self-comparisons to President Abraham Lincoln even more offensive. Although Trump believes his leadership parallels Lincoln, who triumphantly led the nation through one of its greatest political and social upheavals, former President Barack Obama recently insinuated that the Trump White House is “not even pretending to be in charge.”

The United States has absconded its longstanding role as a global leader, leaving behind a power vacuum that China is all too eager to fill. While Trump has utilized the coronavirus to further his personal and political agenda of bashing former Vice President Joe Biden and Obama in the hopes of swinging the November election in his favor, China has used it as strategic leverage to rebrand its Belt and Road Initiative (BRI) into the “Health Silk Road” to vie for international leadership.

In March 2020, President Xi Jinping emphasized China’s desire to work with Italy to build a “Health Silk Road 健康丝周之路” in his phone conversation with Italian prime minister Giuseppe Conte. In the limelight of the media frenzy that became Italy after it was deemed the first European epicenter of the coronavirus, China provided Italy with thirty-one tons of essential supplies as well as three rounds of intensive care doctors.

Italy was an obvious choice for President Xi to establish a European partnership on his new Health Silk Road given that it was the first G7 country to embrace the BRI. For China, Italy is a hub of European connections and strategic ports, particularly in Trieste near Venice. Additionally, there are over three hundred thousand Chinese nationals living in Lombardy to which Wuhan connects via daily flights, giving China an obvious propensity for Italian partnership.

Days after the first planeload of supplies to Italy, China extended its Health Silk Road further into Europe through donations to Spain. Instead of airlifting supplies, China sent a train full of medical equipment on a seventeen-day, thirteen-thousand-kilometer journey from Yiwu to Madrid, to inaugurate the northern route of the BRI. Disguised as a charitable response, this journey was a symbolic statement of modern political aspirations. The train journey revitalized a previously dilapidated route connecting Yiwu in Zhejiang province of eastern China (south of Shanghai) to the ancient capital of Xian and the northern high-speed train routes to Xinjiang province.

The connection to Xian is particularly significant because it was the capital city during the Tang Dynasty (618–907), the most cosmopolitan dynasty in Chinese history. President Xi’s decision to send a train marked the physical emergence of a “Health Silk Road,” and signifies that he expects the same prosperity for modern China as seen during China’s most prosperous dynasty.

China’s “donation diplomacy” has gone on to provide well over four billion masks, sixteen thousand ventilators, thirty-eight million pieces of protective clothing, and three million testing kits, not to mention over $2 billion in relief aid from Europe to Africa.

It is too early to determine the full range of China’s donation diplomacy as it is still ongoing; however, it is clear that the Communist Party of China (CPC) has emerged as the perceptive leader in humanitarian response to the coronavirus, regardless of its potential ulterior motives and somewhat negative opinions, especially from the United States.

While President Xi has capitalized on the pandemic to rebrand his Belt and Road Initiative and promote health resources abroad, President Trump has used the coronavirus to promote his own road to reelection at the expense of the people in the US where the coronavirus deaths already exceed 120,000.

Trump continues to agitate political division by calling Black Americans and other peaceful activists “thugs,” quoting white supremacists in stating “when the looting starts, the shooting starts.” His subtle goal in doing so is to redirect political attention to his reelection campaign.

For instance, capitalizing on the media attention given to covering BLM protests, Trump strategically diverted focus to his campaign rally, tweeting “Any protesters, anarchists, agitators, looters or lowlifes who are going to Oklahoma please understand, you will not be treated like you have been in New York, Seattle, or Minneapolis. It will be a much different scene!”

Furthermore, Trump’s decision to hold his first campaign rally in Tulsa seems particularly motivated to instigate further political divides. Tulsa was the location of a 1921 Race Massacre in which the previously affluent Greenwood District of Oklahoma, known as Black Wall Street, was destroyed by white rioters and over six thousand Black people were placed in temporary internment camps as a result.

Instead of creating effective epidemic control policies, the Trump White House continues shifting blame about the coronavirus, or the “kung flu” as Trump called it. Recently, the White House issued a scathing report on the CPC for hiding the outbreak of the coronavirus.

In January and many times thereafter, however, Trump purposefully downplayed concerns about the virus, stating the United States had the situation “totally under control.” He shied away from naming the coronavirus a pandemic altogether, preferring to preserve the economy and Wall Street for political gain and self-preservation, instead of American lives. At his June 20 rally, he even suggested that the government “slow the testing down.”

China is pushing back against U.S. allegations, warning that the United States is forcing the two countries into a “new Cold War.” Unlike the former Soviet Union, the still-thriving civilizational-state has the comparative economic advantage and diplomatic influence that the United States used to enjoy during its Cold War with Russia. Trump, championing world dictators from Turkey to South Arabia, has undermined American values and the Jeffersonian vision of the Republic.

To reassert its trademark strength in global leadership, the White House must immediately cease releasing statements and promoting policies intended to amplify divisions across political party lines that disturb domestic unity and American tranquility. The Trump administration must attempt to reconcile internal political differences before it can hope to effectively curb China’s influence abroad because, as former presidential great Abraham Lincoln once said, “a house divided against itself cannot stand.”

The next American president, whether it be Biden or Trump, must create a strategic and consistent policy reflecting the founding vision of the Republic in dealing with China abroad as well to counter China’s gaining favor across Central Asia, Europe, and Africa in the wake of its Health Silk Road.

Patrick Mendis, a former American diplomat and a military professor, is a Taiwan fellow of the Ministry of Foreign Affairs of the Republic of China and a distinguished visiting professor of global affairs at the National Chengchi University (NCCU) as well as a senior fellow of the Taiwan Center for Security Studies in Taipei.

Dominique Reichenbach, an American David Boren scholar, served as a research intern and teaching assistant at NCCU. Their views expressed in this analysis do not represent the official positions of the current or past affiliation of their institutions nor the respective governments.