Could a Korean-Style Armistice End the Russia-Ukraine War? 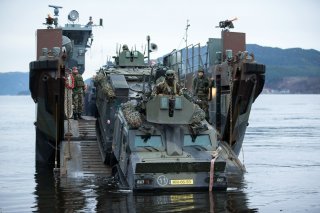 During the Korean War, North Korea launched a military invasion to “reunify” with South Korea. Despite North Korea’s expectations for a quick victory, the war eventually turned into a stalemate. With quick intervention from a U.S.-led multinational military command and South Koreans’ resistance to “liberators,” communist forces were mostly repelled back to the prewar border. However, the United States and South Korea were neither able to completely destroy the northern communist forces nor retake North Korea’s territory claimed by the South, as Communist China’s intervention made further advance north too costly. Anxious to prevent an escalation of the Korean War into a global war, the United States eventually agreed to an armistice.

Several analysts have predicted that the Russo-Ukrainian War could end with a similar armistice. Early this year, Russia launched an invasion to “de-Nazify” Ukraine’s government and “liberate” the Russian-speaking population within Ukraine. So far, however, the war has turned into a stalemate, with Russian forces succeeding in only occupying relatively small parts of Ukraine. Though the United States did not send its own military forces as it did during the Korean War, international sanctions against Russia and aid to Ukraine were important factors in bolstering Ukrainians’ resistance. Nonetheless, the risks of escalating war with Russia have prompted calls for an armistice. In fact, Ukraine’s intelligence chief has warned Russia could impose an armistice similar to that of the Korean War. Such an armistice would partition Ukraine’s territory, with southern, eastern regions currently occupied by Russia and pro-Russia separatist governments remaining under de facto Russian control.

Even if the United States and the international community conclude that an armistice is the “least bad outcome,” could they convince Ukraine to accept a ceasefire as South Korea did? To answer this question, it is important to note that South Korea initially opposed the armistice and attempted to obstruct the armistice talks. The United States eventually achieved South Korea’s qualified compliance only after providing two sets of reassurances to the latter. Similarly, Ukraine’s government is currently opposed to an armistice, which maintains a ceasefire line over its territory. Even if Ukraine were to accept an armistice eventually, it will likely demand similar reassurances as South Korea did during the Korean War.

With U.S. forces largely responsible for holding back communist forces, the United States held leverage in pressuring South Korea to accept an armistice. U.S. policymakers, however, feared relying on coercive pressure alone, as that could motivate Rhee’s defiant, desperate resistance, destabilizing South Korea even after the signing of an armistice. As a result, the Eisenhower administration partially accommodated Rhee’s conditions. The United States pledged to sign a mutual defense treaty. If post-armistice talks failed to achieve substantial progress within ninety days, the United States pledged to withdraw from the talks with South Korea and discuss alternative strategies to achieve Korea’s political reunification. In return, South Korea had to pledge not to start a military operation without prior U.S. consent. Ultimately, Rhee’s government agreed to observe the armistice “for a limited time” after securing a U.S. security commitment and political (though not military) support for future reunification.

Based on proposals by Ukrainian negotiators, Ukraine’s conditions for an armistice are similar: long-term security reassurance and a political solution to recovering its sovereign territory. In exchange for withdrawing their request for a NATO membership and accepting an official “neutral status,” Ukraine’s negotiators have requested a multilateral security guarantee from countries like the United States, Turkey, and Israel to provide military assistance if Ukraine is attacked in the future. Ukraine has also proposed a fifteen-year negotiation timeframe over its territories currently occupied by Russia, such as Crimea, pledging to rule out the use of force to retake these territories within this time frame.

Without reassurances on these security and political conditions, it is difficult to expect Ukraine’s President Volodymyr Zelenskyy to agree to an armistice. In multiple interviews, Zelenskyy has rejected a ceasefire that sacrifices Ukraine’s territorial sovereignty. Though open to compromise on Russia’s demand for Ukraine’s neutral status, Zelenskyy has stated such compromise should be complemented by the Western and international guarantees for Ukraine’s future security. Domestic political considerations also appear to be an important factor, with Zelenskyy’s warning that ratifying an armistice agreement would require a popular referendum.

Accommodating Ukraine’s armistice conditions will be challenging. A formal international security guarantee for Ukraine (particularly by the West) could clash with Russia’s demand for Ukraine’s nonaligned status. Russian negotiators have demanded Ukraine’s recognition of Russia’s annexation of Crimea and the independence of pro-Russia separatist governments in Donbas and Luhansk. For Russia to portray the armistice as victory, international (and Ukraine’s) recognition of Russia’s control over these territories could be necessary.

However, the United States has less leverage than it did with Rhee in persuading Zelenskyy to agree to an armistice without accommodating Ukraine’s political and security conditions. Though the United States provides aid to Ukraine and leads international sanctions against Russia, neither U.S. nor NATO forces are fighting within Ukraine. While Rhee’s threat to continue the Korean War unilaterally was constrained by the weakness of the South Korean military, Zelenskyy has stronger bargaining leverage from Ukraine’s military successes so far in mostly containing Russia’s military advance. If Russia rejects international security guarantees for Ukraine and demands formal recognition of its control over Crimea and Donbas, Ukraine’s government is likely to request continued U.S. and Western aid so that its military could unilaterally combat and eventually repel the Russian military completely from these territories.

Some in the West might favor Ukraine’s continued war with Russia rather than an armistice that fails to hold Russia accountable for its aggression and leaves Ukraine’s political and security future uncertain. However, the proponents of an armistice do have legitimate concerns in seeking suspension of the military conflict. As the war prolonged, the risks of the West’s direct military confrontation with Russia could grow, expanding the conflict to the rest of Europe. While military attrition would escalate the world’s economic and food crisis, even Ukraine’s victory on the battlefield could create new security risks, as a desperate Russia might resort to destructive measures, such as chemical and even nuclear weapons.

However, the challenge for advocates of an armistice is that providing an “off-ramp” for Russia alone is not enough to achieve a ceasefire. Ukraine’s government also requires an “off-ramp” to accept an armistice. Will the United States or other countries with sufficient security capacity provide a formal pledge to defend Ukraine from future Russian aggression? Even if Russian forces continue to occupy some parts of Ukraine’s territory after an armistice, will the United States and the international community recognize Ukraine’s political claim over its lost territory and diplomatic efforts to regain them? These are the types of reassurance Zelenskyy’s government might need to justify entering an armistice with an adversarial Russia.

The Korean War lasted for three years before the signing of an armistice. After over seventy years, the armistice is still in effect over a divided Korea. Nearly three months into a war, could Ukraine be convinced that a similar armistice is preferable to continued war? The burden is on the United States and the world to convince Ukrainians not just risks of attrition but reassurances of an armistice, that their security threats would not worsen in the future, and that their territorial losses could be restored in the future.

Jong Eun Lee is a Ph.D. Candidate and is also an adjunct faculty at the American University School of International Service. Prior to this, he has served as a South Korean Airforce intelligence officer. His research specialty includes U.S. foreign policy, South Korean politics and foreign policy, alliance management, East Asian regional security. He has published articles in The Diplomat, National Interest, East Asia Forum, Eurasia Review, and The Korea Times.