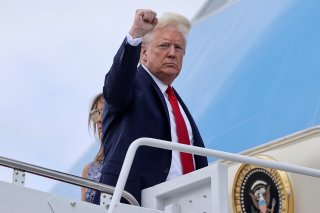 Lenin famously observed that there are decades when nothing happens and then there are weeks when decades happen.

Since the coronavirus pandemic struck early this year, we now seem to be living in such tumultuous weeks. In this new world of rapid change, and with five months still left to go before the U.S. November elections, one would do well to display humility in trying to predict the economic and international political backdrop against which that election will take place.

Never before in living memory have we seen such rapid economic change both at home and abroad as we have seen in the wake of the coronavirus pandemic.  From the sunny days of a strong U.S. economy and the lowest unemployment rate in the past fifty years, we have swiftly moved to an economic collapse and to Great Depression-like unemployment levels. While it took more than three years from the onset of the Great Depression for U.S. unemployment to reach 25 percent in 1932, today unemployment has managed to rise to such levels in less than three months.

Never before too have we seen such a rapid withdrawal of capital from the emerging market economies as we are seeing today. Nor have we seen such a rapid and sharp decline in their currencies. This makes it difficult to exclude the possibility that later this year we could have a full-blown crisis in the emerging market economies, which now account for more than 40 percent of the world’s overall output.

It is not only in the economic and health areas that matters seem now to be moving at warp speed. So too it seems to be occurring in the area of international relations. From a truce declared in the U.S.-China trade war at the end of last year, the coronavirus epidemic seems to be moving us swiftly to a U.S.-China cold war. China’s current heavy-handed response to the Hong-Kong protests and the approaching US November elections do not bode well for economic relations between the world’s two economic superpowers in the months immediately ahead.

The optimists in Mr. Trump’s camp are hoping for a very sharp bounce back in the U.S. economy as the coronavirus lockdown is lifted that would pave the way for a return in unemployment to a single-digit level come November. It is possible that such a rosy scenario could occur. However for it to do so, it would be necessary for us to avoid a second wave of the pandemic that could stop U.S. consumers from resuming their normal spending patterns. It would also be necessary for us to find some way of mitigating the fallout on consumer and investor confidence from the wave of household and corporate bankruptcies that is bound to come in the coronavirus lockdown’s wake.

For a goldilocks U.S. economy scenario to occur, it would also be necessary that the U.S. economy not be hit later this year by an external economic and financial market shock. Unfortunately for Mr. Trump, it is not difficult to identify potential triggers for such an external shock. These include the possibility that a further souring in U.S.-China trade relations could lead to a renewed U.S.-China trade war. They also include the possibility that a substantially weakened European economy will soon experience another round of the European debt crisis or that a deepening of Brazil’s present political turmoil could trigger a full-blown emerging market crisis.

Mr. Trump could very well be lucky and have the stars realign for him come November 3. However, it is at least equally possible that he could have to go the polls with a very unfavorable economic and coronavirus backdrop. As Mr. Trump is so fond of saying, “We’ll see what happens”.