A Crisis of Credibility: Why Non-Governmental Organizations are Struggling 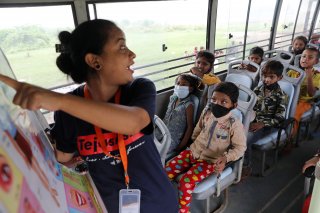 The Biden administration has returned human rights to the forefront of U.S. foreign policy. Secretary of State Antony Blinken recently announced that the United States would be rejoining the United Nations Human Rights Council. “The United States is committed to a world in which human rights are protected, their defenders are celebrated, and those who commit human-rights abuses are held accountable,” he said.

Non-governmental organizations (NGOs) focusing on human rights play a vital role in the deliberations of decisionmakers in national governments and international organizations. Approximately three hundred NGOs contribute to the work of the UN Human Rights Council, for example.

Unfortunately, too many human-rights NGOs—both large and small—suffer from a crisis of credibility. Persistent questions about their sources of funding, political bias, and lack of due diligence undermine the reliability of the information they espouse.

Take, for example, two of the world’s best-known human-rights watchdogs, Amnesty International and Human Rights Watch. Too often, their accounts of abuse are based not on reporting by their own employees on the ground but rather on information supplied by third parties—often with less than stellar reputations. In the case of Gaza, many of the accounts of Palestinian civilian casualties have come from organizations run by Hamas, a foreign terrorist organization with a demonstrated track record of distortion.

Funding scandals further compromise the objectivity of purportedly nonpartisan organizations. In 2009, senior officers of Human Rights Watch (HRW) solicited funds from Saudi officials by highlighting HRW’s “battles” with “pro-Israel pressure groups.” Undeterred by the outcry that this incident provoked, HRW was at it again in 2012 when it accepted a secret donation of $470,000 from a Saudi billionaire reportedly involved in human-rights abuses, and who in making his donations stipulated that the organization was to refrain from “criticizing Muslim majority countries for violating LGBTQ rights.”

A plethora of smaller, more opaque and country-specific organizations dot the Middle Eastern landscape. Their backers and funders are often clouded in secrecy. In the case of the Arab Gulf states, for example, multiple UK and U.S.-based NGOs focus on Bahrain, the United Arab Emirates, or Saudi Arabia, especially in the wake of 2011’s Arab Spring. Prominent international NGOs and certain media outlets have increasingly relied on reports produced by such organizations in their assessments of human-rights situations in Arab Gulf countries.

The problem here is that their work is deeply flawed. Most of the Middle East human-rights NGOs more closely resemble advocacy organizations. Their interests lie in pursuing highly partisan political agendas, as opposed to engaging in good faith interactions with concerned governments. They routinely contend that citizens are unjustly imprisoned and mistreated while in custody.

Unfortunately, the facts often do not substantiate such claims. In many cases, governments produce compelling evidence linking prisoners to designated terrorist organizations. On other occasions, credible assessments of a government’s adherence to international human-rights standards are blithely dismissed in favor of more alarmist yet fictional narratives.

In 2018, The Washington Post interviewed a number of Bahraini detainees suspected of militant activity, without the presence of government personnel, and found that the detainees’ accounts of Iranian-backed conspiracies were consistent with the charges brought by the authorities. But when Bahraini officials opened their detention facilities to foreign inspection by neutral observers who gave them a clean bill of health, they were accused of a whitewash.

The sad fact of the matter is that not all dissidents are peace-loving Jeffersonians. And not all Arab governments are run by legions of knee-jerk torturers. Committed insurrectionists willfully distort the truth to undermine stable and popular regimes. Well-intentioned government officials struggle to protect the rights of their citizens in the face of very real threats. Regrettably, too many human-rights advocates reflexively validate the former, while minimizing the significance of the latter.

The State Department’s 2020 human-rights report noted that government officials in the Arab Gulf were generally “not responsive to NGOs they believed were politicized or unfairly critical.” The report added that their attitudes towards NGOs reflected declining trust and engagement over the past few years. Their skepticism is not without foundation. A large portion of these organizations’ funds comes from anonymous donors whose provenance is open to question. Their persistent distortion of the facts, absence of due diligence, and failure to credit host governments for positive actions taken offers little incentive for cooperation.

The international human-rights community can and should take meaningful action to restore confidence in their methods and management. More robust oversight, financial transparency, and due diligence on political bias and accuracy are long overdue. Absent such sweeping measures, journalists and policymakers should be more circumspect regarding the community’s reporting of abuses. The more powerful these organizations become, the greater the need for independent judgment.

Prof. Ivan Sascha Sheehan is the executive director of the School of Public and International Affairs at the University of Baltimore. Opinions expressed are his own.