The Palestinians Aren’t Going Away 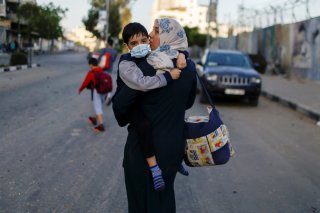 The latest round of Israeli-Palestinian violence demonstrates anew the falsity of a decades-old notion used to support Israeli policies in the occupied territories. That notion is that Palestinian Arabs could somehow be made a non-factor—sufficiently marginalized that Israel could do what it pleases throughout Palestine without making compromises necessary for peace and without paying an unacceptably high price for the absence of peace. The notion has been advanced at different times in different ways that are not mutually exclusive.

Early Zionists recognized that their settlement project would inevitably entail conflict with the indigenous residents. Ze’ev Jabotinsky, the right-wing Jewish nationalist who founded the Irgun terrorist group, incorporated this recognition in his concept of an “iron wall.” Jabotinsky wrote, “Any indigenous people will fight the settlers as long as there is a spark of hope to be rid of the foreign settlement.” Unrelenting force was the way to try to extinguish that spark.  Jabotinsky argued that no agreement was possible with Palestinian Arabs, who “would accept Zionism only when they found themselves up against ‘an iron wall,’ when armed force gave them no alternative but to accept Jewish settlement.”

The idea of an iron wall to demoralize Palestinians into submission has lived on, well after Palestinian leadership accepted the existence of the State of Israel and issues became ones of how far Israel would go to extinguish any possibility of a state for Palestinians. The ideology has been carried on by prime ministers such as Menachem Begin, who succeeded Jabotinsky as head of Irgun, and Benjamin Netanyahu, whose father worked for Jabotinsky.

The strategic idea of applying overwhelming, demoralizing force continues with the Israeli practice of mowing the grass—periodically attacking Palestinians with force that causes death and destruction well out of proportion to whatever it supposedly is a response to.  The Israeli assault this month on the Gaza Strip is but the latest of multiple rounds of mowing.

Besides trying to devastate morale among Palestinians, making the Palestinians a non-factor has entailed walling off from Jewish Israelis the daily reality of Palestinian life in the occupied territories. An objective is for Israelis to go about their own daily lives in a comfortable, worry-free, and guilt-free manner. The walling has been literal, in the form of concrete more than iron, with a barrier that snakes through the West Bank. Until this month, the wall had mostly succeeded in keeping the sordid reality on one side of the wall out of the line of sight and thinking of those enjoying carefree life on the other side. Issues involving the Palestinians played almost no role in the Israeli election two months ago.

Beyond trying to crush morale of the Palestinians and sustain the morale of Jewish Israelis, propaganda (or hasbara, to use the Israeli term) aimed at audiences abroad has been another part of the effort to make Palestinians a non-factor. A central phrase here has been “for a people without a land, a land without a people.” This mischaracterization of the Zionist settlement project in Palestine was a particular favorite of former Prime Minister Golda Meir. And what’s to worry about Palestinians if such people don’t exist, and if the desert that Israel made bloom was previously empty?

Some American politicians have bought into this idea. Sen. James Inhofe (R-Okla.) has said, quite erroneously, that at the time of the Balfour Declaration, “Palestinians were not there. Palestine was a region named by the Romans, but at that time it was under the control of Turkey, and there was no large mass of people there because the land would not support them.” Former Speaker of the House Newt Gingrich declared during his 2012 presidential campaign that Palestinians are an “invented people.”

It’s hard to know how much such statements are merely a toeing of the Israeli line and how much reflects persuasion by the hasbara. That at least some of it is the latter is suggested by a question a U.S. senator asked a Saudi official, in an exchange witnessed by a journalist, about where the Palestinians had come from “to begin with.”

A more recent approach to trying to make the Palestinians a non-factor has been the “outside-in” strategy, whereby the Israeli and U.S. governments would reach deals with Arab governments that, it was anticipated, would pressure or persuade the Palestinians to give up hope of having a home of their own and not living under someone else’s boot. A basis for this strategy has been the fatigue that has set in after decades of unresolved Israeli-Palestinian conflict, as well as the fact that each Arab government has other concerns to which it may give higher priority.

The Trump administration went farther along this line than any of its predecessors, first by producing a “peace plan” that was nothing of the sort but instead bypassed the Palestinians and would leave them with a less-than-a-state entity that is not recognizably different from the current Palestinian Authority. The administration then pressured some Arab governments into what were misleadingly described as “peace accords” but instead constituted an upgrading of existing relations and an anti-Iranian military alliance that sharpened lines of conflict in the Persian Gulf. The fact that the Trump administration had to bribe the Arab governments involved with expanded arms sales and other destabilizing favors should have been a clue that this development did not reflect any new spirit of kumbaya.

The People and the Spark Remain

Despite all this—despite the crushing military force, the walling-off, the diplomatic end-runs, and the denials that Palestinians even exist—the Palestinians are still around, and still have the spark of hope that Jabotinsky was determined to extinguish. This has been demonstrated vividly in this month’s explosion, touched off by one more Israeli move to oust Palestinians from their homes.

That the Palestinians and the spirit of resistance live on should not be surprising. Nationalism is one of the strongest impulses felt by people anywhere, and the Palestinians are no exception. Palestinian nationalism has been augmented by a sense of ethnic identity that has been sharpened by the ethnic- and religious-based discrimination that Israel has practiced and even enacted into law.

The sense of ethnic identity underlies the sentiments of Arabs elsewhere in the region, affecting governments as well as the Arab street. That street is seeing many pro-Palestinian demonstrations, offsetting or even outweighing the fatigue that the governments had been feeling with Palestinian issues. The same sense underlies the collateral conflicts that have most distinguished this round of Israeli-Palestinian fighting from earlier rounds: the outbreak of serious mob violence in Israeli cities.

For the majority of Arabs who are Muslim, religiously-based outrage has augmented the ethnic sentiment. This was especially true after Israeli forces fired injury-causing rounds at worshippers inside the Al-Aqsa mosque, which Muslims regard as the third holiest site in Islam.

Also, a sense of home—of wanting to return home, and to be safe in one’s home—is one of the strongest human sentiments, and again the Palestinians are no exception. This ought to be easily understood by Jews who base their understanding of ancient history on religious scriptures and speak of a millennia-long exile from the holy land. The Palestinians probably have as much claim to such an ancient tie to that land as anyone else. The DNA of the Canaanites—who, according to the same scriptures, were there even before the Israelites of the Pentateuch—can be found in the Arabs, as well as Jews, who live in Palestine today. But it is displacement that is measured not in a couple of millennia but rather a couple of generations—including that associated with the wars of 1948 and 1967. It is displacement that regularly occurs today in Jerusalem and the West Bank that is more meaningful to today’s Palestinians.

The Biden administration is learning fast that the Middle East is not going away as a set of pressing policy issues. That the Palestinians are not going away needs to be part of that lesson. Dispatching a deputy assistant secretary to try to tamp down the current violence does nothing to address the conditions that have given rise to this and other rounds of violence. Ritually invoking Israel’s right of self-defense while declining to recognize the same right for Palestinians suggests being stuck in an old and unproductive policy rut.

President Joe Biden has the means to get out of that rut. This includes the billions in currently unconditional subsidies to Israel that probably should not be called “aid” because Israel is a wealthy country that is quite capable of purchasing the arms and other things the subsidies go for. Even just enforcing existing law regarding the standards that are supposed to apply to such payments would be a useful start.

Biden has linked foreign and domestic policy objectives by arguing that competition with China is a reason to enact his proposal for spending on infrastructure in the United States. He ought to make links in the opposite direction as well by stating that conditioning payments to Israel on Israeli behavior that respects human rights and stops impeding a genuine peace settlement with the Palestinians would be consistent with the most important objectives of his domestic policy.