The Dark Days of Higher Education are Here 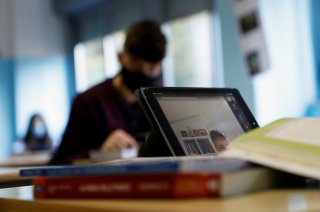 “You can care about certain scholars, students, material culture, and texts within a field and still want that field to be dismantled and burned so that those elements can be truly saved & white supremacy can be smothered,” thundered University of Iowa associate professor of history Sarah Bond on Twitter. The reason, she explained, is purely to destroy the “privileging” of Latin and Greek in classics. “I would just like to make it a global antiquity department and to rename it while abandoning Latin and Greek as its core basis. I am not proposing firing people in the least. Quite the opposite. Expanding, combining, and learning—and then abandoning Classics as a field.” This week, the University of Leicester, right in the middle of England, decided to scrap teaching Geoffrey Chaucer and foundational English classics such as The Canterbury Tales and Anglo-Saxon epic Beowulf, in favor of an inclusive “and exciting” course that focuses on race and gender. The Telegraph reported that the university bureaucrats have emailed the faculty that there will be new modules that are “excitingly innovative” and would cover “A chronological literary history, a selection of modules on race, ethnicity, sexuality and diversity, a decolonized curriculum, and new employability modules.”

By now this should all be depressingly familiar. For the practically impotent Anglo-American conservatives, it is easy to laugh at this relentless destructive nonsense. After all, this is what academia is all about. There are questions about the massification of academia that resulted in an overproduced but mediocre elite class, ignorant of patrimony and instinctively subservient to the subaltern. Bizarre spectacles of gender-radicalized taxpayer-funded public university archeology professors guiding protesters to tear down the war monuments and obelisks were observed during the highly emotionally charged and vaguely religious riots of last summer. There’s a relentless assault in the name of diversity and inclusion, whether they are “decolonizing,” or “disrupting texts,” which are all clever ploys to dilute what might be considered an objectively superior canon.

But what it does not mention are the structural causes of what we are observing. Why is it, that suddenly, faculty and academia seem so powerless in stopping the onslaught of “wokery,” to use the terminology of Member of Parliament Jacob Rees-Mogg? In my research for the Martin Center, I wrote about the pattern in which normal and high-functioning discipline gets hijacked from within by activist academics, who then proceed to control funding and committees and then channel all research and teaching potential towards activism. To use a feminist pedagogical tradition, these academics are like viruses, determined to kill what they consider hetero-patriarchal western canons from within.

But that is also a partial argument. Ultimately, this also demonstrated the logic and flaws of a purely market-based approach which is prevalent in modern conservatism. Consider the fact that in the last thirty years, there has been a 10 percent increase in faculty, in colleges, compared to a whopping 221 percent increase in administration and bureaucracy. That, more than anything, explains the emetic “self-help” jargon-filled direction of academia. Risk-averse bureaucracy, are designed for self-sustaining and expanding. Transforming academia to a market-oriented approach has made students consumers, and the university administrations are designed to enhance that consumer experience. On one hand, the massification of academia has destroyed quality and hierarchy, in favor of forced equality in outcome. On the other hand, a consumerist approach has absorbed all the market dictated dogma, where bureaucrats, with overwhelming power and limited intellect or appreciation about the historic tradition and purpose of higher-ed, are practically ignorant about what destruction they are bringing in.

Kevin Williamson, to his credit, pointed this out during the riots last year, arguing that all this petty radicalism, as well as push for inclusion and diversity are just that, mindless bureaucrats trying to create more jobs for themselves. It is, essentially, a racket. Williamson wrote, “Well-off white women from elite colleges run the diversity-and-sensitivity racket like the 17th-century Dutch ran the tulip racket, like the De Beers cartel used to run diamonds. Big Caitlyn is getting paid. Affluent white women are the main E-Class beneficiaries of the current headhunting project to clear a little room at the top, just as they have historically been the primary beneficiaries of affirmative-action programs, contracting set-asides, and other programs to help out the poor disenfranchised Georgetown alumni out there in the cold and dark.”

During the feudal ages, banned books and manuscripts, and forbidden knowledge were preserved in highly selective monasteries. Higher education is facing a similar trajectory. Unless there are rival academic institutions being set up which only operate on the basis of quality and merit, with a deliberate disdain towards any form of egalitarianism and activism, a new dark age is nearer than perceived.