Defining ‘Terrorism’ Is the First Step to Defeating It 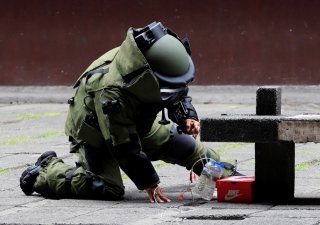 Growing evidence shows right-wing terrorism is on the rise across Western Europe and the United States. Right-wing groups are becoming increasingly transnational, fuelled by easy access to online technologies while drawing on global concerns and grievances, such as migration and climate change. This enables them to tap into a wider audience and to grow both in reach and influence.

In addition, the success of the Taliban in overthrowing the Western-backed government in Kabul has inspired and emboldened jihadist groups worldwide. This is a worrying picture for governments and the public. If acts of terrorism are likely to become more common, it is essential that domestic counterterrorism policies keep pace with the changing nature of the threat so that Western nations can respond effectively. However, Western policy- and decisionmakers still grapple with how to define acts of terrorism and when it is appropriate to bring terrorism charges.

A recent RAND Europe study found that there is continued disagreement among subject matter experts over how different acts of extremist violence, in particular terrorism, should be classified. This lack of consensus, at both the international and national levels, is concerning. It may reveal a gap in counter-extremism and counterterrorism policy.

There are long-standing issues with defining an act of terror. Those problems are exacerbated today by numerous factors, including mutations in “traditional” right-wing ideology which complicate the ability of governments to recognize right-wing acts of violence as terrorist acts. These mutations are aided by core characteristics of social media platforms, such as anonymity, the ease with which information is posted and shared, the wide audiences that can be reached, and the inherent difficulties with tracing the source of the information.

An example of this is the recent Plymouth incident in the United Kingdom. A gunman opened fire on August 13 and killed five people. Although evidence suggests that he was motivated by incel ideology, the act has not yet been classified as terrorism, despite numerous voices protesting that that should be the case.

Other countries are grappling with the same problem of how to categorize acts of extreme violence. In Canada, a shift can be observed in recent years towards attaching terrorism charges to all relevant cases, despite potential associated difficulties in prosecution. This underlines both the complexity and the importance of the issue.

For example, two incidents in February 2020—one in which a man stabbed a woman to death, allegedly because of incel ideology, and another in which a man killed a woman with a hammer and associated the act with a statement concerning the Islamic State—were both first charged as murder, then as terrorism. Furthermore, an incident on June 6 in which a man drove into a Muslim family and killed four was also charged as terrorism. It was the first time that Canada’s counterterrorism laws were used to prosecute an Islamophobic act.

Similarly, in the United States, a debate has been ongoing for several years over what can be classified as murder, hate crime, or terrorism. This is especially relevant to mass murders associated with gun violence, where many of the perpetrators are inspired by different aspects or variants of right-wing ideology, such as white supremacy, homophobia, or sexism.

A disagreement on classification has significant implications when it comes to prevention and protection against terrorist acts. Not charging suspected acts of terrorism as such could result in misleading statistics. This can mean policy- and decision-makers overlook key terrorist activity, and thus remain unaware of the scale of the problem until it manifests itself. Incorrect statistics can also affect the level of resources earmarked to deal with particular problems, which can impact the level of protection that societies have against terrorist threats. This is even more relevant due to the possibility of declining national security budgets as a result of Covid-19.

Failing to charge offenders with terrorism when relevant can also prevent offenders from having access to appropriate deradicalization resources. This, combined with inadequate risk assessments, can potentially result in offenders being pardoned or released from prison while still posing a threat to society.

In the current security context of revitalized jihadist groups and ever-growing variations of right-wing ideology, establishing a consensus on the definition of terrorism, and bringing to center stage the importance of adequately charging acts of terrorism could be more important than ever.

The way to achieve this consensus could be to continue to support and enhance communication and consultation between the relevant people involved in defining and charging acts of extremist violence, such as government policymakers, police, and prosecutors. This could ensure that the perceptions of these different stakeholders evolve in a manner that is consistent both with one another and with the changing nature of extremist and terrorist violence. Until this consistency is achieved, counter-extremism and counterterrorism policies may always lag behind the constantly morphing and evolving threat.

Diana Dascalu is a research assistant and Ben Wilkinson is a senior research leader in the defense, security, and infrastructure group at RAND Europe.