Deterrence Assurance: The True Value of the Nuclear Triad 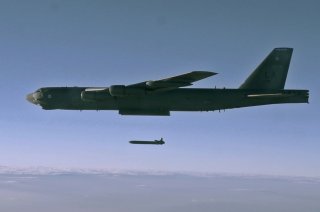 In a new analysis published by the Bulletin of the Atomic Scientists in June, Princeton’s Professor Frank von Hippel proposes to unilaterally eliminate America’s intercontinental ballistic missile (ICBM) force. The ICBM force consists of some 64 percent of all U.S. strategic nuclear delivery vehicles allowed under New START and roughly 60 percent of U.S. on-alert warheads. What is his rationale? He makes a bogus claim that the United States relies upon a destabilizing ICBM launch on warning policy to execute its deterrence strategy.

As numerous former heads of U.S. Strategic Command have explained, the United States would not launch any ballistic missiles until it—at a very minimum—has dual confirmations that the country is under attack. There is not and has not been a policy of “launch on warning.”

In reality, multiple stringent procedural and technical safeguards are in place to guard against accidental or unauthorized launches and to ensure the highest levels of nuclear weapon safety, security, reliability, and command-and-control leadership.

In peacetime, no U.S. strategic weapons are aligned to potential adversary targets. ICBM missiles are targeted on broad ocean areas. Ballistic missiles aboard America’s at-sea ballistic-missile submarines (SSBNs) are aligned to broad ocean-area targets similar to ICBMs. Since bombers have not been on peacetime alert since 1991, they do not have any nuclear targets assigned. Additionally, the policy of the United States is not to rely upon “launch on warning.”  Thus, describing America’s missiles as on a “hair trigger” is a gross mischaracterization; the United States’ so-called trigger is built so it can always wait.

In addition, to even consider launching a missile, U.S. satellites must confirm that an adversary attacking missile launch has been detected. Second, radars must confirm that a missile track has been established. Only then will various commanders and civilian leaders convene what is known as a launch and/or threat conference to determine what launch has been undertaken and what the threat is. No such conferences have ever been called in all of the seventy-five years of the nuclear era. And more importantly, no president has ever been formally consulted regarding the launch of a nuclear weapon.

But what about von Hippel’s claims of a false warning possibly triggering a mistaken retaliatory launch? It is true that in 1980, a Senate Armed Services Committee report examined two such false missile attack warning occurrences that did take place. The report, however, also concluded that there was no danger of the United States inadvertently or accidentally or mistakenly launching a missile. This was determined after officials examined the details of the two warnings of a Soviet sea-launched ballistic missile and land-based ballistic missile launches in 1979 and 1980.

Can America solve this problem by getting rid of ICBMs? Von Hippel notes that Dr. William Perry, a former secretary of defense, has called for the termination of all ICBM programs, including getting rid of the current Minuteman force.

However, ICBMs have real-world value. As President John Kennedy underscored, having the Minuteman ICBMs first on alert the very day the United States discovered the Soviet Union placed their own nuclear-armed missiles in Cuba, was his “ace in the hole” that ended the Cuban missile crisis without armed conflict and Armageddon.

What is at the core of von Hippel’s worry is not that the United States will launch its missile prematurely in a crisis. His concern appears to be two-fold. He believes the United States should not have a policy of holding at risk its enemy’s nuclear forces by targeting them, which is known as a counterforce strategy. He is also concerned that nuclear weapons cannot really be used to terminate or “win” a conflict.

The assumption von Hippel makes is that the U.S. nuclear weapons strategy need not hold at risk the other guy’s military capability, as America’s enemies are assumed to value their people more than they do their weapons. Irrespective of their goal of being the world’s hegemon or bully, by brandishing their nuclear capability to “rule the roost.”

What are the facts? The Russians and the Chinese see nuclear weapons as their ticket to get the United States to stand down in a crisis, and let aggression succeed. As top nuclear professionals Professor Stephen Blank and Dr. Mark Schneider together outlined in detail speaking at a Mitchell Institute seminar in September 2020, that is what the Russians and increasingly the Chinese, see as the prime value of the nuclear weapons they possess—a coercive power to win conflicts or crises without having to fire a shot at the United States.

And a corollary to von Hippel’s objection to holding at risk the weaponry of the “bad guys” is the further assumption as the late Bruce Blair called for in House Armed Services Committee testimony in 2019, that the U.S. response to a nuclear attack need not be nuclear but indeed conventional, even if the United States is attacked multiple times with nuclear weapons. In this view, a U.S. nuclear response that attacks the bad guys’ weaponry is not needed. As Blair asserted, he did not want to be the first country to break the moral taboo against using nuclear weapons.

Von Hippel’s analysis also suffers from other severe deficiencies. He assumes the likely attack by the Russians, for example, is an all-out nuclear attack on the United States, seeking to pre-emptively disarm America of its forces based in the continental United States. Under that scenario, a U.S. retaliatory launch if undertaken only after warning of an attack, might be hitting empty Russian silos and port facilities and airfields. In von Hippel’s view, holding at risk Russian military capability gives Russia an incentive to also launch quickly in a crisis, causing grave instabilities.

But how ironic that von Hippel himself rules out such an all-out Russian missile launch as the least likely Russian response in a crisis. And he repeatedly and accurately notes that no matter the extent of the Russian attack, U.S. survivable submarines can retaliate with a massive attack fully capable of taking down remaining Russian military assets.

But nevertheless, von Hippel’s fear is still based almost solely on the possible U.S. response to a highly irrational, unlikely, and suicidal all-out massive Russian attack.

That is why the Russians and the Chinese talk about using nuclear weapons “early but not often” and use limited strikes to get the United States to stand down and surrender, under a policy of “escalate to win”—to win the escalation dominance game in a serious game of high stakes nuclear poker.

Here is where a launch on warning posture for the United States does not even come into play. The U.S. ICBMs, in this case, would be fully survivable and a prime capability to hold at risk the Russian reserve second strike ICBM forces. Which deprives the Russians of a sanctuary from which to attack America.

Von Hippel displayed a map where hundreds of Russian targets were hit with over twelve hundred U.S. warheads as an initial strike on the Russian Federation. Von Hippel assumes U.S. missiles are postured only for first strikes against America’s enemies. But even if that were the case, which it is not, there is not anywhere near such a number of warheads on alert in the U.S. arsenal capable of hitting Russia with over twelve hundred warheads from a day-to-day normal alert posture.

In short, if Russia launches an all-out attack on the United States, then America has a secure retaliatory force that would eliminate what remains of Russian military power so as to render such power extinct. If a Russian attack is limited, then the U.S. ICBM response is credible after knowing with no doubt the United States or its allies have been attacked.

As former Secretary of Defense Frank Carlucci told Congress in January 1989, the “United States does not rely on its capability for launch on waring or launch under attack to ensure the credibility of our deterrent. The ability to carry out such options complicates Soviet assessments of war outcomes and enhances deterrence,” according to the fiscal year 1989 Annual Report to the Congress.

However, reducing nuclear warheads to the point where the president’s options are limited to counter population targets only weakens the credibility of our extended deterrent commitments to say nothing of the immoral nature (and long rejected) of such a strategy.

Von Hippel, to cover his intellectual bases, next tries to pretend killing four hundred Minuteman or ground-based strategic deterrent missiles will not harm the U.S. deterrent. He tries to be clever and proposes that the four hundred Minuteman warheads be transferred to the submarines by simply getting more submarine warheads out of the stockpile.