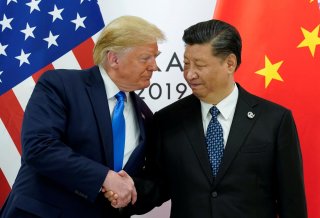 A few days ago, the White House released a declassified document from 2018 outlining the Trump administration’s “US Strategic Framework for the Indo-Pacific.” The document summarized the challenges the administration saw the United States facing in the region, the U.S. interests and “desired end states” it would pursue there, and the “lines of effort” it would follow toward those goals.  In an accompanying statement, National Security Adviser Robert O’Brien said the strategy document was released “to communicate to the American people and to our allies and partners America’s enduring commitment to this vital region.” It seems more likely that it was issued one week before the end of the administration in an effort to frame the discourse on Donald Trump’s legacy in policy toward East Asia, and probably also to box in the Biden administration’s approach to the region. Trump’s supporters have characterized his East Asia policy primarily as a strong and decisive pushback against the growing threat from China after what they characterize as decades of passive policies that allowed Beijing to extend its influence globally and resist pressure to democratize internally. They will probably characterize any divergence from the document by the Biden administration as a reversion to weakness and failure to fully recognize the China threat.

But what has the Trump administration actually accomplished in the Indo-Pacific region, pursuant to its agenda?  According to the strategy document, the key challenges were to:

It’s hard to see how any of these goals has been significantly advanced over the past four years. On the contrary, the United States is in a worse position in the Indo-Pacific region than it was four years ago.

Instead of maintaining U.S. strategic primacy there, the Trump administration has almost certainly confirmed that it is irretrievably lost. Through inattention, rhetoric largely devoid of strategy, and policies and behaviors that have eroded the confidence American allies and partners have in Washington’s credibility and reliability, Trump has profoundly undermined the historical leadership role that the United States has played in the Indo-Pacific region during and since the Cold War.  Two of the document’s operating assumptions were that “loss of US prestige in the Indo-Pacific would weaken our ability to achieve US interests globally” and that “Chinese economic, diplomatic, and military influence will continue to increase in the near-term and challenge the US ability to achieve its national interests in the Indo-Pacific region.”  Both of those assumptions have been amply validated: the United States has lost prestige relative to China, thereby weakening its ability to achieve its interests.

In terms of countering Chinese influence and promoting the alternative of a “liberal economic order” and “fair and reciprocal trade,” it is hard to give Trump high marks after his early withdrawal from the Trans-Pacific Partnership, which inevitably reinforced China’s economic role and clout in the region.  This was followed by Trump’s protectionist trade policies, which did not spare U.S. allies and partners in Asia, and his administration’s inadequate efforts to compete with China’s infrastructure and investment projects under the Belt and Road Initiative. Overall, Trump’s Free and Open Indo-Pacific initiative, implicitly targeted at building a coalition to counterbalance Chinese power and influence, never yielded a coherent strategy or much substance—or sustained attention from Washington.

Perhaps the biggest setback has been to the vitality of the U.S. alliance network. The strategy document included among the Trump administration’s “top interests” that of “enhanc[ing] the credibility and effectiveness of our alliances,” and O’Brien’s statement highlighted the goal of “strengthen[ing] our wide and diverse network of allies and partners.” Instead, Trump’s relative neglect of the allies, and especially his pressure on Tokyo and Seoul to increase their financial contributions to mutual defense or face a drawdown of the U.S. forward military presence, exasperated our closest friends in Northeast Asia.  Trump’s neglect extended to Southeast Asia, where he only intermittently showed interest in the multilateralism that is central to the identity of the Association of Southeast Asia Nations and its members’ collaboration with Washington on regional economic and security issues. Overall, the Trump administration was relatively inattentive to the particular interests, priorities, and perspectives of U.S. partners in the region—often taking them for granted and pressuring them to choose Washington’s side against Beijing while repeatedly denying that it was doing so. The strategy document characterized its “desired end state” as one in which “most nations in the Indo-Pacific view the United States as their preferred partner.” That preference remains, but regional confidence in and reliance on it has been severely diminished.

All this was reinforced by Trump’s general disregard for human-rights issues, best exemplified by his reported statement to Chinese president Xi Jinping that Beijing’s massive reeducation camps in Xinjiang—essentially aimed at brainwashing Muslims to abandon their faith—were “exactly the right thing to do.” And Trump’s increasingly blatant disregard for American democracy, which culminated in his claims of electoral fraud after his defeat in the November 2020 election and his instigation of the assault on the U.S. Capitol and U.S. Congress on Jan. 6, has deflated America’s stature across the Indo-Pacific region as an exemplar of democratic values and constitutionalism.

Regarding China, the Trump administration helped fuel the worst downward spiral in U.S.-China relations since diplomatic normalization more than forty years ago. Although Beijing bears ample responsibility, Trump’s approach to China has been based on an exaggerated characterization of its strategic ambitions as an existential ideological threat to the United States, a false narrative about the misguided failure of earlier U.S. engagement with China, and a serious miscalculation of the United States’ leverage in shaping Beijing’s choices and behavior. The strategy document includes among its objectives that of “cooperat[ing] with China when beneficial to U.S. interests”—but then identifies no specific areas or issues on which this has been pursued. All this has fueled an unnecessarily antagonistic and rhetorically hostile relationship, which has further reinforced concerns among U.S. allies and partners about the wisdom and risks of collaborating with Washington’s approach to Beijing.

Finally, on North Korea: the strategy document cites a “desired end state” in which “North Korea no longer poses a threat to the U.S. homeland or our allies.” But Trump’s flash-in-the-pan diplomacy with Kim Jong-un not only failed to extract concessions or reduce the threat from Pyongyang; it arguably made unilateral concessions (such as Trump’s suspension of U.S.-South Korean military exercises, and his granting of diplomatic stature to Kim) and reinforced Kim’s belief that he can manipulate Washington.  Kim’s belligerent statements about the North’s nuclear program at a ruling party congress earlier this month reflect his determination to forge ahead regardless of U.S. pressure.

In sum, Trump’s Indo-Pacific strategy has weakened the United States’ relative position in the regional balance of diplomatic, economic, and military power. It has escalated tensions and a security dilemma with Beijing for which Washington is increasingly ill-prepared. It has failed to make any progress with North Korea; and degraded perceptions among U.S. allies and partners about the United States’ credibility, commitment, reliability, attention span, and competence—and its effectiveness as an international role model.  This deterioration of the U.S. position makes the strategy document’s repeated emphasis on maintaining “U.S. strategic primacy” in the Indo-Pacific region all the more nostalgic and delusional.

The Biden administration thus faces a daunting challenge in repairing the damage wrought by its predecessor in the Indo-Pacific region and reviving U.S. power and influence there. Given the historical shifts in the balance of power and in the strategic calculations of the countries in the region, it may not be possible to recover all that has been lost.  But with time and effort, Washington can still play a key leadership role in the region and must endeavor to do so.