Dysfunction and Inequality Are Putting Democracy Under Threat 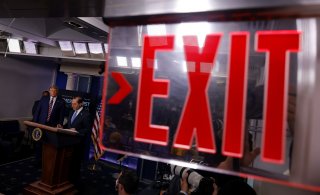 The Book of Daniel tells that the King of Babylon, Belshazzar, holds a great feast for his noblemen when suddenly a hand appears on the wall writing mene-mene-tekel-upharsin. As no one among his entourage can interpret the writing, the frightened king calls for Daniel who tells him that God had weighed Belshazzar and his kingdom, had found them wanting and will destroy them. The same night the king dies and his kingdom is divided.

The election in the United States, Brexit, the political and administrative mismanagement of the coronavirus, and cracks in the hitherto solid economic globalization are the writing on the wall for the political leaders and the establishment all over the world.

The cocktail of capitalism-globalization-technology worked wonders until a decade or two ago but has now turned toxic.

It is too soon to offer a thorough analysis of the impact over the long term. But it is not too early to point at a couple of seminal and decisive changes breaking up the political and economic architecture governing the world since the end of World War II.

The elite has pocketed the overwhelming part of economic wealth. The have-nots/social losers will not willingly go along with the model and such behavior anymore. They do not feel that the societies they live in are “theirs,” a feeling which is alienating them from political decision making and squeezing them economically. The establishment has had chance after chance, but new political leaders promising changes have—broadly speaking—followed the same policies as those the electorate threw out. Without fundamental changes, have-nots/social losers will take matters into their own hands. Riots in the United States and some European countries are omens of what we can expect to come.

The elite didn’t show any interest in a dialogue, didn’t speak a language social losers could understand and didn’t try to comprehend their daily life. One may wonder why Trump, an apparently rich man with a lavish lifestyle who likes playing golf, appeals to social losers. The reason is that he speaks their language and doesn’t look down on them. By instinct, they grasp what he means and they agree. His analysis and ideas are congruous with theirs. He understands how they feel because he is not a successful businessman. From the point of view of his supporters, he is “one of us,” who was rejected by the establishment—even ridiculed.

Donald Trump got 8.3 million more votes in 2020 than in 2016. Yes, eight million more Americans felt that policies offered by him were good for their daily life and better than what other candidates could offer. And this after four years of uninterrupted barrage from the establishment pointing out all his failings and shortcomings. A breakdown of votes cast is thought-provoking. According to BBC he lost support among white men but gained vote shares among white women, black men and women, Hispanic men and women, and Asian & other minorities. The largest increase came from Asian & other minorities with his share going up from 31 percent to 38 percent and black men with a jump from 13 percent to 19 percent. Maybe he lost in 2020 and won in 2016 because Hillary Clinton was unpopular among white men.

It is almost certain that any other incumbent president would have been blown out having mismanaged the coronavirus. Not Trump. Speaking the same language as millions of Americans, he shifted the responsibility to the establishment accusing them of bungling the matter and—in a mysterious way—almost got away with it. His credentials are so strong that despite statistics contradicting his statements, his base believed him. Without the coronavirus he might have won, taking credit for the performance of the economy, low unemployment and a booming stock market.

Social losers feel that the challenger, Senator Joseph Biden, is every inch a member of the establishment. From 1973 to 2009 he was in the senate and from 2009 to 2017 Vice-President. This is admirable: he is without doubt a seasoned politician, but from the point of view of the social losers, Biden is also a president-elect that can hardly offer something new and even less a break with the past. The current situation can be compared with the inauguration of Franklin D. Roosevelt in 1933 who sensed that the only way to take the United States out of the great depression was something new, offering the American people a new deal. Biden must respond to this challenge. And that will not be easy with the composition and attitude of the electorate.

According to Brookings, the 2,584 counties voting for Trump in 2016 account for 36 percent of national income. In 2020 the figures are 2497 counties accounting for 29 percent of national income. Except for the Houston and Dallas-Fort Worth metroplex, almost all constituencies and by far the most populous ones voting for Biden are found on the east coast or West coast with the Trump constituencies largely found west of Chicago and east of San Diego—areas with a smaller population. Trump finds his base in areas with a thinner population, generating less income, among the less well-educated people and those who are inward-looking and do not attach much importance to the U.S. role as upholder of economic globalization.

An analysis discloses congruity between voting patterns in the United States and the Brexit referendum 2016 in Britain. BBC reported a few days after the British EU-referendum June 2016 that of the thirty areas with the fewest graduates, twenty-eight voted for leave, while twenty-nine out of the thirty areas with the most graduates voted for remain.

One more omen of a coming confrontation is the large share of absentees at elections, who either acquiesce in a life without hope or start to contemplate non-parliamentarian actions—taking to the streets. Measure in the percentage of Americans above eighteen years of age, only 51 percent turned up to vote in 2016 with 57 percent in 2020. Compared to presidential elections in the 1960s the turnout was about 5-10 percentage points lower. More or less the same picture emerges in the British referendum with a turnout of 72.2 percent of the electorate. An instinctive interpretation of what may be labeled apathy tells that the absentees are more on the Trump line than among the establishment. In fact, it may not be far off the mark to suggest that only about one-third of the American adult population supports the establishment thinking, and only about one-third of the adult population in Britain supported the European Union membership preferred by the establishment.

Democracy depends on trust and the support of the electorate. The electorate is inclined to vote for those offering the best possible governance. As most matters are complicated and opaque, people vote according to whom they believe in. Studies show that a majority of young people both in the U.S and many European countries dismiss the hitherto sacrosanct truth, that democracy is indispensable. By implication, that means they also reject the notion of choosing political leaders via the ballot box and also the right to get rid of them in the same way. They do so, not because they prefer other systems of which they have little knowledge or experience, but because—as clearly seen in the United States—they do not think that democracy delivers.

A big cleavage separating social losers and the establishment is opening up in the United States, Britain and many (albeit not all) continental European countries. In the eyes of social losers, the large fluctuations in the business cycle—the lauded creative destruction due to technology and the outsourcing and offshoring—robs them of jobs and creates uncertainty and insecurity.

For those still enjoying the privilege of living in democracies respecting fundamental rights of freedom and cherishing this privilege, time is running out. The task is no longer, as was the case in the 1990s, to preach the indisputable virtue of the model around the world, but to get democracy to work at home.

Western democracies need a new social contract tackling inequality, unfairness, falling social mobility and collapse of social coherence. This is gradually turning into a life or death question for this political model, which only thirty years ago looked rock solid as by far the best system mankind had ever seen.

The first test comes when a vaccine to fight the coronavirus is ready. The coronavirus’s contagiousness is measured by a basic reproduction number, or R0 (how many people are likely to be infected by one sick person). Obviously, the more cramped and closer together people live, the higher will be the R0. And they are to be found in poorer areas, often slums or decrepit areas, populated by people who may find it difficult to pay for the vaccine.

An equitable distribution would point to a system where those most exposed to the coronavirus will get the vaccine first whether they can pay for it or not. This applies globally as well as nationally. The reaction of countries and political systems around the world will be a litmus test of what the future has in store.