The Echo of 1962: How the Sino-Indian War Shapes Asia 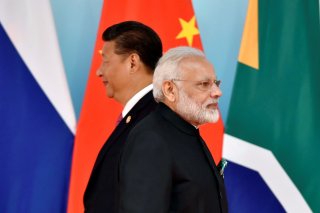 China and India are rivals whose competition will shape Asia in the twenty-first century. While there are many reasons behind the rivalry between Beijing and New Delhi, their 1962 war holds a place of honor. The short border war resulted in a Chinese victory and has acted as the catalyst for an enduring adversarial relationship. On the sixtieth anniversary of the war, and amid an ongoing crisis in Sino-Indian relations, it is crucial to examine how the war continues to influence the rivalry between Beijing and New Delhi today.

The Sino-Indian War was brief and decisive. In October 1962, amid escalating tensions over its territorial dispute with New Delhi, China launched a massive attack on India. While a territorial dispute was the main issue of contention, Mao Zedong’s decision to attack his southern neighbor also reflected China’s resentment of New Delhi’s support for the Dalai Lama and his Tibetan movement, and suspicions that Jawaharlal Nehru’s government had joined forces with the United States and the Soviet Union. The war lasted approximately one month and ended with a Chinese victory. For New Delhi, the conflict was a massive political and military disaster. As Chinese troops evacuated most of the areas occupied during their onslaught, the territorial dispute that precipitated the conflict remained unresolved politically. Accordingly, the war turned China and India’s restrained and mostly diplomatic competition into a permanent militarized geostrategic rivalry that has endured ever since.

How has the Sino-Indian War shaped the rivalry between Beijing and New Delhi? The 1962 conflict made the resolution of the territorial dispute more difficult given that it enmeshed the issue in Indian domestic politics and became a particularly sensitive nationalist issue. The war also led to the full-scale militarization of the de-facto border between the two sides, leading to regular tensions and the construction of military infrastructure in border areas, both of which feed the “security dilemma” between the two Asian neighbors. The impact of the war shaped the rivalry between China and India in five ways.

First, China’s decisive victory bred a strong sense in Beijing of military superiority over India. As a prominent Chinese expert on India once explained to me, the People’s Liberation Army (PLA) is not really concerned about the Indian military because “we beat them once and we can beat them again.” While India sees China as its most important national security threat, China only views India as a secondary challenge and is more concerned about its potential alignment with the United States. As a result of this thinking, Beijing has consistently underestimated New Delhi as an adversary and treated it as a lesser military power, which India deeply resents. China’s sense of superiority over India has also contributed to Beijing’s willingness to escalate border tensions. Border crises broke out in 1986, 2013, 2014, 2017, and 2020. From China’s perspective, such escalation makes sense since the risk that a border dispute would provoke a larger war is small given that India would not dare to start a conflict with China. Therefore, in Beijing’s view, the advantages of using escalation to pressure New Delhi are significant.

Second, the 1962 war led India to perceive China as a serious security threat. This has exacerbated the rivalry in two ways. Militarily, this threat perception has contributed to an arms race. India has focused on developing its military to prevent another surprise Chinese attack and blunt the PLA’s advantages. Following the war, India massively increased its defense spending and reformed its military, fueling its rise as a major military power in direct competition with China. India has developed capabilities exclusively designed to confront China, including aircraft carriers, long and medium-range ballistic missiles such as Agni-II and Agni-III, and nuclear weapons. In 1998, Indian prime minister Atal Bihari Vajpayee explicitly claimed in a secret letter to U.S. president Bill Clinton that these nuclear weapons were acquired, in part, to counter “a state which committed armed aggression against India in 1962.” Predictably, India’s response to the perceived threat posed by China has intensified the security dilemma between the two sides.

Domestically, the perception of many Indians that China is a security threat has increased pressure on the government to adopt a harder stance toward Beijing, further intensifying the Sino-Indian rivalry. Often embodied in the popular narrative that China “betrayed” India before and might do so again, Indian public discourse has linked China’s aggressive takeovers of disputed territory in 2017 and 2020 to the 1962 war. In both cases, the Indian government responded strongly to Beijing’s actions under substantial public pressure.

Third, the 1962 war and the resulting border standoff turned the Himalayan area between China and India into a contested periphery. After the war, Nepal, Bhutan, and Sikkim emerged as important factors affecting the military balance on the Sino-Indian border. Nepal has been the main focus of such competition and consistently worked to balance between China and India, producing occasional crises in the process. The most recent such crisis was the escalation of the India-Nepal territorial dispute in 2020, which many in New Delhi blamed on Beijing’s manipulation of Kathmandu at a time of great tensions on the Sino-Indian border. Bhutan, which under pressure from New Delhi has not established diplomatic relations with China, has also been affected by the China-India standoff in the Himalayas. Bhutan’s territorial dispute with China has been a function of the Sino-Indian one and Beijing has used it to pry away Thimphu from India and pressure New Delhi militarily in the very sensitive Doklam area, where a tense standoff between Chinese and Indian forces took place in 2017 and the former made new advances in 2022. A third and now defunct Himalayan state, Sikkim, has also been affected by the dynamics unleashed by the 1962 war. As China tried to lure the kingdom into its sphere, New Delhi pushed for Sikkim’s accession to India, which took place in 1975 without Beijing’s recognition. Sikkim has remained a trouble spot in China-India relations ever since, even after Beijing officially recognized it as part of India in 2005.

Fourth, the 1962 war played a key role in the formation of the China-Pakistan “all-weather” alliance. Accordingly, the often unpredictable rivalry between New Delhi and Islamabad on the Kashmir issue has affected China-India relations. This was abundantly clear in 2019 when India’s restructuring of Jammu and Kashmir, which Pakistan claims, produced substantial tensions with China. Even more important, New Delhi has consistently feared that China and Pakistan might coordinate their military activities on India’s northern and western borders and threaten it with the nightmare scenario of a two-front war. The alliance between Beijing and Islamabad has also exacerbated the China-India territorial dispute and made its resolution even more difficult. In 1963, Pakistan resolved a territorial dispute with China by giving it the Trans-Karakoram tract which India claims as part of Kashmir. This development produced a substantial obstacle to the resolution of the China-India territorial dispute and involved China even more in the Kashmir issue.

Finally, the 1962 war solidified the role of Tibet as a contentious issue between China and India. After the war, New Delhi massively increased its support for the Dalai Lama and his government in exile in Dharamsala, India, to play the “Tibet card” against China. There are even claims that in 1965 Indian prime minister L.B. Shastri was planning to recognize the government in Dharamsala before he passed away. More consequentially, after 1962 India and the United States began to support Tibet’s struggle against China by providing arms, training, and logistics. This support, which was discontinued long ago, confirmed Chinese suspicions that India promotes Tibetan independence and, together with the United States, wants to destabilize the region. Finally, in response to the 1962 war, India founded two predominantly Tibetan special paramilitary forces, the Indo-Tibetan border police (ITBP) and the Special Frontier Force (SFF). A major unofficial goal of both forces, especially the SFF, is to prepare for operations in Tibet and lead an uprising against Chinese rule during an armed conflict between China and India. The SFF reportedly conducted operations against China along the disputed border during the 2020 escalation of the China-India territorial dispute. The continued existence of both forces has increased Beijing’s sense of insecurity and exacerbated the China-India rivalry.

One can argue that the 1962 conflict did not matter much. Since China and India are two large Asian powers that share a lengthy contested periphery and strive for regional leadership, they were destined to become rivals anyway. Yet, this argument misunderstands that the 1962 conflict turned a restrained competition between two rising great powers into an enduring rivalry. The short border conflict produced a long echo that still reverberates in China-India relations.

Ivan Lidarev (Ph.D., King’s College London) is a foreign policy analyst and expert on Asian security, as well as a former advisor at Bulgaria’s National Assembly. He has previously served as visiting fellow at the Institute of International Relations Prague (IIR) and India’s Observer Research Foundation (ORF). All views expressed are his own.