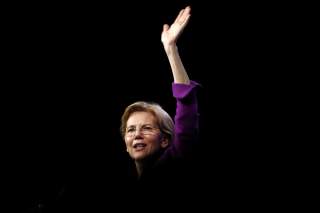 In what was perhaps a risky move for the first, announced and major Democratic presidential aspirant, Elizabeth Warren has backed her prospective opponent, President Donald Trump, on an issue on which he’s drawn widespread, establishment opprobrium in recent weeks: foreign policy.

Warren, a dyed-in-the-wool progressive, told liberal television powerhouse Rachel Maddow of MSNBC this week: “'It is right to get our troops out of Syria,” as the president has signaled he will do-- a move that has drawn the protest resignation of James Mattis and charges of an administration on the “deep descent” from Mitt Romney. Warren’s choice of venue to back Trump on the matter was particularly striking as MSNBC has given Romney almost universally positive coverage, as the network continues to cultivate a marriage of convenience with neoconservatives.

Warren’s comments this week crystalize her foreign policy position ahead of what promises to be a raucous Democratic primary. She’ll run as unabashedly progressive and reformist-- in alliance with sectors of her party willing to work with the other side of the aisle, such as Sens. Rand Paul and Mike Lee, who have teamed up with liberal Democrats on matters such as the Yemen war.

That had been an open question. Warren, a leading U.S. expert on bankruptcy law, cut her teeth as a major American politician with a singular focus on economic issues -- middle class angst and widespread anger at major financial institutions. Foreign policy has traditionally not been her focus. And she had not worked as closely with the likes of Lee and Paul as her major progressive ally -- and potential rival -- Sen. Bernie Sanders.

Sanders and his allies view foreign affairs as a leading area for improvement on his 2016 run for president as foreign policy. The thinking is that had he assailed Hillary Clinton on a problematic record on Syria, Libya, Iraq as well as the Obama administration war in Yemen, he might well have captured the Democratic nomination. Sanders’ early post-2016 hires included Matt Duss, a thoughtful and tough-minded policy expert. Duss has worked with Republicans when possible, but has castigated the Trump administration hawks and their allies in other arenas, particularly on Iran. Sanders, Lee, Paul and Sen. Chris Murphy (another potential candidate) have formed the quartet in the Senate that has most impactfully pushed the administration on foreign policy, even brokering a fruitful alliance on the issue with hardline, populist organ Breitbart News.  Warren has not been nearly as prominent in these backroom machinations.

But that’s changing. Warren’s comments this week follow up on more forthright steps in recent weeks, as she’s captured significant media buzz with her early launch. Maddow gave Warren around forty minutes of free, primetime media earlier this week: an extraordinary amount of time that’s logistically unlikely to be repeated for her future rivals. In a November essay for Foreign Affairs, Warren weaved her deeply-felt views on international economic inequality and trade deal failures into a tacit critique of the liberal international order, a now much bandied-about buzzword, which many of her liberal opponents will doubtlessly run on defending, insisting this president is dismantling it. “There’s a story Americans like to tell ourselves about how we built a liberal international order—one based on democratic principles, committed to civil and human rights, accountable to citizens, bound by the rule of law, and focused on economic prosperity for all. It’s a good story,” Warren wrote, dismissively. Daniel McCarthy in Chronicles says in this manifesto Warren has positioned herself “as a left-wing America Firster.”

At a parallel speech at American University late last year, Warren openly called for defense cuts, something members of both parties have long been loath to do for fear of appearing soft on national security. As McCarthy notes, “Foreign policy has been a stumbling block to Democrats for fully 50 years now. … As bad as the Democratic record has been, alas, the record of the Republican Party under the Bush dynasty was worse.”

And on some issues, Warren is now out ahead of Sanders. Sanders has been critiqued in recent days by many of his supporters on the activist left for his failure to swiftly announce his views on the planned Syria withdrawal. Warren now presents herself as far less ambiguous. As the primaries approach, her stand on foreign affairs is likely to continue to evolve against American intervention abroad.