Secretary of Defense James Mattis Will Depart In February 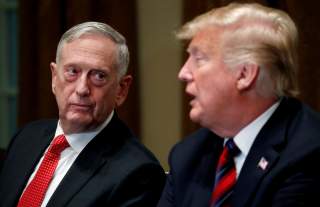 James N. Mattis, secretary of defense, announced his resignation Thursday evening, declaring that President Donald Trump has “the right to have a Secretary of Defense whose views are better aligned” with his.

Mattis will leave in February, the president confirmed.

“General Jim Mattis will be retiring, with distinction, at the end of February,” Trump tweeted Thursday. “After having served my Administration as Secretary of Defense for the past two years. During Jim’s tenure, tremendous progress has been made.”

Mattis’ announced departure follows a convulsive few weeks for the administration—the departure of his ally John F. Kelly, chief of staff, and a political reorientation in Washington in anticipation of a newly-Democratic House, armed with subpoena power.

But Mattis’ announced departure—which The National Interest reported as likely by year-end, in April—on Thursday night seemed principally motivated by President Trump’s renewed determination to fulfill campaign promises to extricate the United States from Syria and Afghanistan, and potentially militarize the U.S. border.

“President Trump’s brilliant decision to leave Syria reset the national security clock. Mattis was always ‘entrenched management’ determined to fight change and extend the Bush-Obama policies that President Trump promised to end,” retired Col. Douglas Macgregor told me Thursday night. Macgregor, a favorite of Fox host Tucker Carlson, has been considered for posts such as national security advisor in the past.

Macgregor says: “Mattis’s exit means the president can finally break with the past and build a new national security team in DOD and the WH staffed with new people whose loyalty and judgment the president can trust.”

In general, foreign policy restrainers, already buoyed by the appointment of an ally, Mick Mulvaney, as the new White House chief of staff, have cheered the recent developments.

“Staying in Syria offers grave risk for the United States with no justifying security payoff,” Kurt Couchman, vice president at Defense Priorities, said Thursday. Now that the Islamic State is reduced to remnants... it is in America’s interest to bring our troops home for the holidays.”

William Ruger, vice president at the Charles Koch Institute said: “We commend President Trump’s plan to withdraw U.S. troops from Syria. It’s time to bring all of those troops home ... U.S. security interests would be undermined by an enduring military presence in that country.”

Mattis’ fall from Trump’s inner circle transpired months ago. The president has been widely reported to have stopped referring to the retired Four-Star as “Mad Dog,” and instead joking that he is “Moderate Dog.” Tellingly, unlike Secretary of State Mike Pompeo and National Security Advisor John Bolton, Mattis did not accompany the president to the summit in Singapore this summer with North Korean strongman Kim Jong-un.

Trump said a replacement will be named “shortly.” Two leading candidates long thought to be in contention—Sens. Tom Cotton and Lindsey Graham—would be shocking choices now. Both are far more hawkish than Trump and importantly, Mattis—who just resigned over the matter. A third contender, Ret. Gen. Jack Keane, is also a hawk and has turned Trump down before.

But others in the White House orbit took a darker view of Thursday’s developments.

“Breakdown,” a former senior White House official told me. Asked who would replace Mattis, the official replied: “Question is who replaces Trump,” before noting, as another veteran operative close to the White House told me Wednesday, that Trump’s recent decisions are likely at least partially motivated by a need to assuage a political base upset by his recent, perceived caves on the immigration issue. Trump is hardly going into the new year quietly.