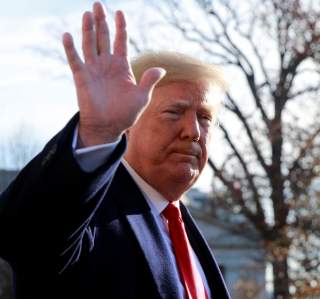 President Donald Trump has settled on Heather Nauert, the Fox & Friends alumnus and current State Department spokesman, as his appointment to the United Nations in New York. He confirmed the appointment to reporters in Washington on Friday; the choice will have to be approved by the Senate. It’s not clear as of this writing whether she would serve in the cabinet, as did her predecessor, Nikki R. Haley. Secretary of State Mike Pompeo and Ambassador John Bolton, national security advisor, are said to favor a return of the position to its pre-Haley form: reporting exclusively to Foggy Bottom.

But Nauert’s ascension means the president has passed on John James, the defeated Michigan Senate candidate, failed to court Dina Powell (the job is “Dina’s if she wants it,” a veteran Republican operative close to the White House told me) and decided to keep his point man on Europe, Ambassador Ric Grenell, in Berlin.

Added, however, to the brewing intrigue around 1600 Pennsylvania is word of a more comprehensive administration staff shakeup. Perhaps impacted by the national moment brought on by the death of President George H.W. Bush, Trump also nominated William Barr, who served the forty-first president, as his attorney general on Friday.

But the coup de grace could be the exodus of White House Chief of Staff John Kelly, as early as Friday, as both CNN and Bloomberg News have reported. A source close to the White House tells me the leading candidate to replace General Kelly remains Nicholas Ayers, the vice president’s ambitious chief of staff. Others favor Mick Mulvaney, the libertarian-leaning budget point man friendly to foreign policy restrainers.

Kelly’s departure, not confirmed, would be a watershed—and Rubicon crossed. Trump, a deep admirer of the military from his school days, has hesitated to part ways with the four-star generals in his midst—Defense Secretary James Mattis and Kelly. Internally, the two are seen as linked. Accordingly, Kelly’s exodus could be viewed as a green light for a Mattis departure. Another source close to the White House says Mattis plans to stick around at least through April.

If there is indeed a major shakeup, it would be the second major national security shuffle of the calendar year. Trump convulsed his administration earlier this year with the appointments of the hawkish duo of Michael R. Pompeo and John R. Bolton at State and the National Security Council. But the latest moves could potentially be broader than were the major shifts earlier this year at State and on the NSC. This administration views immigration concerns as a matter of national security. Barr will be expected by border hawks, upset by the ouster of Jeff Sessions, to keep the heat up on Trump’s signature issue. This contingent also seeks the dismissal of Kelly’s protege, Kirstjen Nielsen, the homeland security secretary. The immigration hardliners favor one of two vanquished political candidates as a replacement—Lou Barletta, the defeated Pennsylvania senate aspirant, or Kris Kobach, who was defeated in his bid for Kansas governor. The danger for the hawks, however, is that the president, first and foremost a fan of political winners, could pass on both.