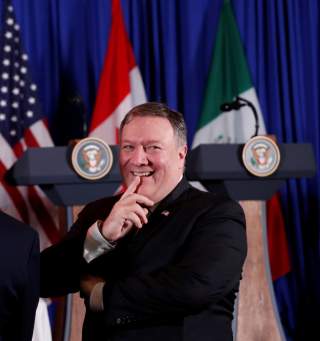 For many core supporters, and some foreign policy restrainers sympathetic to the president’s 2016 campaign rhetoric, the announcement by Mike Pompeo’s State Department this week of the hiring of Mary E. Kissel, a former Wall Street Journal editorial board member who had been deeply critical of President Trump, represents a policy nadir.

“We could not be more thrilled to have her on board,” Heather Nauert, State Department spokesman and a leading candidate to be the next U.N. ambassador, said this week.

Kissel, a journalist, never affixed her name to a “NeverTrump” letter signed by many establishment Republican policy grandees during the 2016 campaign. But her criticisms of Trump’s policies extended well into his administration. “Joke’s on Donald,” a Republican close to the White House told me. As late as this summer, Kissel depicted Trump’s Helsinki summit with Russian President Vladimir Putin as a “propaganda victory” for the Kremlin.

And during the campaign itself, Kissel made her views on the president’s heterodox foreign policy crystal clear. Trump displayed “frightening ignorance” and was “delusional on foreign policy,” she said.

Foggy Bottom is standing behind the appointment. “Mary’s social media posts reflected her role as a member of the Wall Street Journal editorial board. As she has said previously when asked similar questions, her job there was to analyze and write about policy,” the State Department told Breitbart News, which criticized the appointment, this week.

But Kissel’s criticisms were not over tactics, but over policy, which is what she will now advise the secretary of state on.

The bespoke nature of her role looks poised to vault her immediately into the Seventh Floor elite—close to Secretary Mike Pompeo. The State Department says: “she also conducts special assignments as directed by the Secretary.” The appointment, apparently personally directed by Pompeo, belies his past as a rather conventional Republican, before his recent shift to a more pragmatic, Trumpist politician whose career has rocketed under this president.

But it remains striking that Kissel now serves an administration which has framed immigration as a national security issue. She’s written that Jeb Bush, Trump’s most bitter primary foe, was the only serious Republican candidate on the matter; she’s said the president’s views on the subject were “a political loser.” She’s also downplayed the historic nature of Trump’s ascension, chalking up the 2016 victory as a mere referendum on the Affordable Healthcare Act.

In 2016, Trump himself, on Twitter, called Kissel “a major loser” and said the State Department senior policy advisor had “no clue.”

“At this rate, I half-expect an Anonymous Op-Ed from a mole inside the Trump Administration who actually likes the President and is working secretly to implement the agenda he campaigned on,” Darren J. Beattie, a former aide who was ousted from the White House in August, said on Twitter this week, referencing both the scathing anonymous New York Times op-ed and his own dismissal, which remains controversial in political circles sympathetic to the president.

If Trump’s goal is to minimize the possibility of future “anonymouses”—the op-ed attacked the president for deviating from traditional conservatism—his allowance of the appointment of Kissel is perplexing.

The appointment is most disconcerting for those, including foreign policy restrainers, who had high hopes for this renegade administration. Kissel joins James Jeffrey, the NeverTrump Syria envoy, as Pompeo’s second major appointment of someone with an established past critical, in particular, of Trump’s deviations from the old Republican orthodoxy. “The arrival of Jeffrey and Kissel at State, who are more comfortable with Elliott Abrams than Donald Trump, suggests the swamp water is rising fast,” Douglas Macgregor, the retired military man who has been considered for national security advisor, told me Friday. He’s calling for a radical course correction: “If the President wants to end conflict on the Korean Peninsula and remove our forces from Afghanistan and Syria, he’d better start by installing new talent in the personnel office with orders to delete any and all recommended nominees currently under consideration for his administration.”

The hawkish cohort is pleased, however. “Seeing some MAGA venom against @marykissel because as a journalist she was critical of Trump before joining the administration this month. It’s misplaced. Mary is brilliant and the country is lucky to have her at the State Department,” neoconservative reporter Eli Lake said.